Something wet this way comes

Something wet this way comes 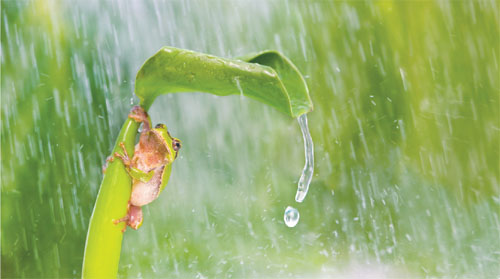 A tree frog clings to a plant in a rainstorm. By Kwon Hyuk-jae

Dig out your yellow slicker, grab your umbrella on the way to work each morning and say goodbye to the sun for a while: The rainy season is nigh.

The wet weather comes every summer, but it seems that some people - even those who have lived here their entire lives - never get used to it.

The meteorological administration identifies the official start of the rainy season based on certain weather patterns involving a high-pressure front colliding with a low-pressure front.

It used to announce the start of the rainy season about a month before it officially began. But it started delaying the forecast in 2007 after numerous complaints of inaccurate predictions. The organization has erred on the other side as well. A few years ago it announced that the rainy spell had ended, but it in fact had not. People who put their umbrellas in storage or left their raincoats at home were caught in the ensuing downpours. The media seized on the situation, highlighting the inaccurate prediction.

As a result, the meteorological administration doesn’t offer up such predictions until it is very sure that the rainy season is about to begin or end.

This year, it made the announcement just four days before the jangma begins. According to the administration, the run of wet weather will start in the southern part of the Korean Peninsula on Sunday and then slowly blanket the country. The rainfall typically lasts until mid-July or later, when the weather gives way to scorching temperatures.

“The long rain front formed far south of Japan is going to approach Jeju Island on June 21 and cause rainfall in the area,” it stated earlier this week.

These aren’t just typical summer showers. It can rain for several days straight, boosting humidity levels - and tempers - at the same time.

It’s not too late to prepare, though.

Invest in a good pair of rain boots and a raincoat, and dig out the clothes you don’t wear that often, as whatever you’re wearing might still get soaked.

You can also turn an annoyance into something enjoyable. Curl up with a suspense novel on a dark and stormy night, or enjoy the sounds of the summer storms while sipping some makgeolli rice wine.

And if all else fails, grab a cab and head to the movies.