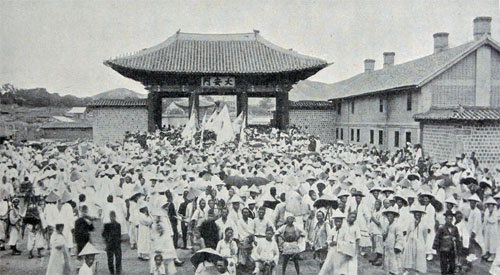 It was a surreal experience.

On a recent visit to Deoksu Palace, which just happened to be June 10, tensions were quickly escalating outside the palace gate as civic groups, labor unions and lawmakers gathered to commemorate the June 10, 1987, pro-democracy movement and, more specifically, to voice their demands to the government. Reports from the following day said that about 20,000 people took part in the rally, resulting in minor clashes with police.

However, that day after passing through Daehanmun, the main gate of the downtown palace opposite Seoul Plaza, a strikingly different world unfolded in front of me - a quiet, lovely sanctuary seemingly guarded against all the noise and craziness outside.

Standing there, it was easy to relate to how Gojong (1852-1919), the 26th king of Joseon Dynasty (1392-1910) and the first emperor of the short-lived Korean Empire (1897-1910), must have felt when this was his home. He spent the last 23 years of his life in the palace, bombarded by the rapid-fire series of changes that accompanied the influx of countries clamoring for influence in Korean affairs. In fact, the representatives, or legations, of those countries were already situated just outside the palace walls.

For most of the Joseon Dynasty, it was Gyeongbok Palace that was the home of the royal family and the center of politics. But the murder of Queen Min (1851-1895), also known as Empress Myeongseong, led Gojong to flee to the Russian Legation, from which he ruled from 1896 to 1897. When he returned, he chose to live in the palace and ordered its reconstruction.

Kenjo Kikuchi, a Japanese journalist who was in Korea when Gojong returned to the palace, describes the Korean king’s intentions in his 1910 autobiography.

“Gyeongun Palace [Deoksu’s name at the time] is extremely small in size. But it’s surrounded by many foreign legations. That is why Gojong has decided to go there,” he wrote. Kikuchi was one of the 48 people who led the party that assassinated the queen.

Historians seem to endorse Gojong’s decision to not go back to Gyeongbok Palace but to live in Gyeongun Palace instead, given the situation at the time.

The main hall Junghwajeon, left, used to be a two-story structure. After a fire in 1904

“By then, Gyeongbok Palace was already exposed to the Japanese, who seemed to watch themselves in Jeong-dong [mindful of the foreign legations],” Kim Jeong-dong, professor of architectural history at Mokwon University, argues in his book “Jeongdong and the Deoksu Palace Emperor Gojong Loved.”

Although there were calls for Gojong to go back to Gyeongbok, most notably in a protest by a group of intellectuals known as the Independence Club, Gojong was determined, Kim says.

According to historical records, the Jeong-dong area in central Seoul, where Deoksu Palace is located, was where many of the princes and princesses of the Joseon Dynasty lived.

In fact, it was the house of Prince Wolsan, the palace’s original inhabitant, that was the beginning of the Deoksu Palace compound. King Seonjo (1552-1608), who fled Seoul when the 1592-98 Imjin War erupted, came back to the capital in 1593. Upon finding Gyeongbok Palace in ruins, he decided to take up temporary residence there.

Today, the house is known as Seogeodang, one of the structures on the palace grounds.

Two succeeding kings, Gwanghaegun (1608-1623) and Injo (1623-1649), also lived in and managed state affairs at Deoksu Palace. By then the compound had been expanded, but after Gyeongbok Palace was restored and resumed its position as the main palace, Deoksu went back to being a supplementary palace and was reduced in size.

Junghwajeon and other structures in the palace were reduced in size. Provided by Myongji University-LG Yeonam Library

Ahn Chang-mo, professor of architectural history at Kyonggi University, pointed to the differences between Deoksu Palace and Gyeongbok Palace.

“While Gyeongbok Palace is overpowering, with a mountain in the back and a wide, royal road stretching out in front, Deoksu Palace sits right at the center of urban activity with major roads expanding around Daehanmun,” Ahn said, adding that when Deoksu became the main palace the area around Daehanmun established itself at the center of modern Korean history.

“Last night, the situation here was pretty restless,” wrote Richard Wunsch (1869-1911), Gojong’s German physician, in his journal the next day. “The imperial palace was completely brought down in fire. Being made of wood, the structures burned up with the wind, and the place quickly became a sea of flames.” 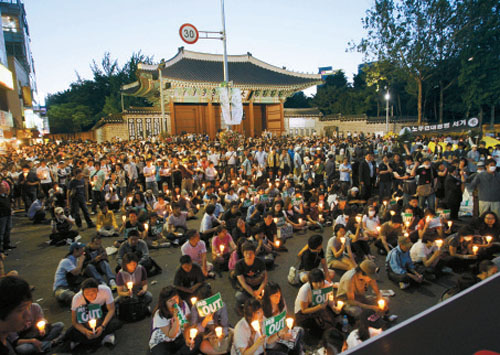 The area outside Daehanmun has been central to the expression of public opinion since Deoksu Palace became the main palace of the Korean Empire in 1897.

The next day Gojong ordered officials to investigate, but the cause of the fire is still unknown. Some historians argue that it was the Japanese that set the fire. But with no hard evidence as of yet, that argument is still debatable. What’s not debatable is that after the fire, the palace was never the same.

During the palace’s reconstruction, Gojong stayed at Jungmyeongjeon, a Western-style structure on the periphery of the palace compound.

But even after the palace was rebuilt it never quite retuned to its former glory. One good example is Junghwajeon, the main hall of the compound where official state ceremonies were held. It was originally a grand two-tired structure, but only one tier was restored.

With the Japanese colonization of Korea (1910-1945) and the death of Gojong, perhaps the palace’s biggest advocate, in 1919, Deoksu Palace was diminished even further. The Japanese opened the palace to the public on Oct. 1, 1933, as a park. By then, the palace compound was reduced to one-third its original size and Seokjojeon, one of its structures, was being used as an exhibition hall.

Today, with high-rises and what seem like neverending protests in the area, it seems like Deoksu’s former regal elegance can only be seen in old photos. 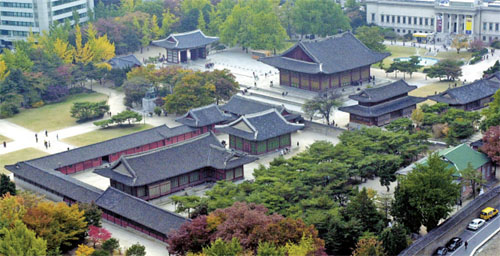 
*This and the next edition of the Old Seoul series will examine Deoksu Palace in central Seoul. 9. Part I: New era, new palace, 10. Part II: Western structures