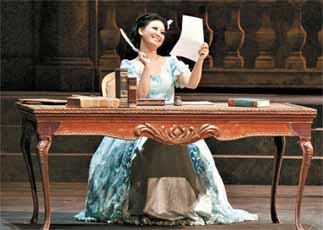 Kang Hye-jeong is one of four performers playing the role of Rosina in “The Barber of Seville” by the Seoul Metropolitan Opera. Provided by the organizer


It’s time to dust off the opera glasses and take your fancy clothes to the cleaners.

Two opera masterpieces - “Norma” and “The Barber of Seville” - take the stage in Seoul this week.

Both operas were created by famed Italian opera composers, and both delve into the subject of love.

But the similarities pretty much end there.

Vincenzo Bellini’s Norma, performed by the Korea National Opera, incorporates a variety of themes ranging from revenge to sacrifice.

Set in 50 B.C., Norma is secretly in love with Roman proconsul Pollione, and the two eventually have a pair of children. But Pollione finds himself falling for the young and beautiful Adalgisa. Enraged, Norma decides to seek revenge on Pollione’s new love interest.

Norma’s arrival in Seoul is meaningful for Korean opera buffs, as it hasn’t been performed here in over two decades. Norma is also regarded as an extraordinarily difficult opera piece in other countries around the world.

In this week’s performance, soprano Kim Young-mi plays the role of Norma. Kim, who this year celebrates her 30th year as a soprano, was the first Korean opera singer to make her debut overseas.

While Norma is serious and can be a bit difficult to understand, Gioachino Rossini’s “The Barber of Seville” shows a lighter, comical side of opera,

The plot is simple: Local nobleman Count Almaviva falls in love with the young Rosina at first sight. But another man - Rosina’s guardian, doctor Bartolo - attempts to stop the two from dating. That’s where Figaro, the barber of Seville, steps in, playing the role of cupid to bring Count Almaviva and Rosina together.

The Seoul Metropolitan Opera, which is behind the production, has installed big screens on the third floor of the performance venue so that audiences in the cheap seats can get a closer look at the facial expressions of the singers. Additionally, ballerinas will explain the major characters in the opera during the prelude.


Opera Norma will be held several times daily at the Seoul Arts Center from Thursday to Sunday. Tickets start at 10,000 won ($7.80). For more information, visit www.sac.or.kr.

The Barber of Seville will be held several times daily at the Sejong Center from today through Sunday. Tickets start at 20,000 won. For more information, visit www.sejongpac.or.kr.