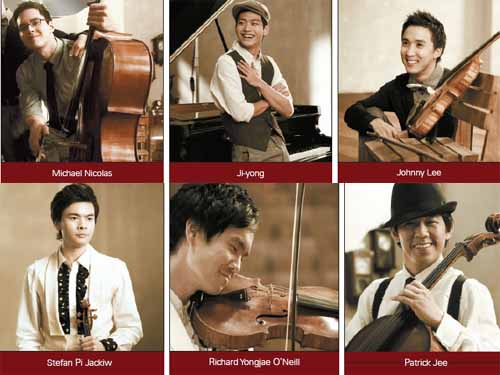 The boys are back.

The group, composed of six performers who have their own individual music careers, is reuniting for the third straight summer since its debut in 2007.

Led by Korea’s star violist Richard Yongjae O’Neill, Ensemble Ditto will headline a two-day, four-concert classical music festival this weekend. It’s a much bigger event than the lone performances the group held each of the past two years.

And fans certainly seem appreciative. Tickets to the festival’s opening and closing concerts - the ones in which Ensemble Ditto performs - sold out within two months.

“We’ve tried very hard to reach out to as many audiences as possible,” said O’Neill, who assumed the role of music director of the event. “So this year we’ll have a festival. We’ve expanded outside chamber music to family concerts, symphony concerts and concerto concerts.”

Nicolas said he feels at home with the group, as he has had a chance to meet the other members before. “We’ve known these guys for some time, so playing in Ditto is like doing what we’ve been doing before,” he said at a press conference last week to promote the festival.

Ji-yong said he’s had experience with chamber music, “but not as extreme and intense as this.”

Ensemble Ditto will again take the stage to wrap up the festival with the fourth and final concert dubbed “Love Songs,” featuring Schumann quartets.

As to the huge success Ditto has managed to achieve in just three years, the members expressed both surprise and cautious optimism.

“I think Ditto could last for generations, 10 to 20 years. It just keeps getting more fun and better,” cellist Jee said.