Memories from a battlefield ballad

Memories from a battlefield ballad 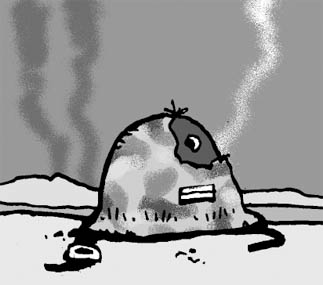 The heart of a song can usually be found in the first verse. Rarely must one wait until halfway through a song to hear the lyrics that reveal the feelings that led to the song’s title.

“Battlefield Nocturne,” a ballad popular during the 1950-1953 Korean War, is a little different. Released one year after the war broke out, the song uses a sleepless soldier on the battlefield to drum up support to fight against the North’s invasion.

The first verse begins as follows:

“Leaves fly/ Over the battlefield under the moonlight/ Soundlessly falling/ Dewdrops feel cold.”

The second verse, however, reveals the soldier’s true emotions: “With gunshots/ As my lullaby/ I race into a dream world/ Back to my old hometown/ There on the front yard/ With a bowl of water/ My mother’s head bowing to the sky for my safe return/ So white with frost that I cry/ Ah, I so want to embrace her.”

The tone of Battlefield Nocturne starts out valiantly, but erodes into tears by the time the lyrics of a mother’s frost-tinted hair are uttered. These words have been sung softly and sorrowfully or bellowed with gusto by young soldiers on the battlefields at night from the time of the Korean War until even today. The song was referred to as a sentry theme as it kept soldiers company as they stood guard through the night.

The lyrics to this battlefield ballad are like a painting or poetry, portraying the complex web of emotions behind war.

In wartime, families are separated and lost. They are engulfed with the insecurity and fear of not knowing whether their loved ones are dead or alive, all the while experiencing the heartbreak of missing them.

Many other songs composed during times of war convey a heart’s yearning for a husband on the battlefield or for a wife left behind. Other laments mourned a brother who failed to make it back home. Such songs are long forgotten and unfamiliar to the younger generations who are more used to the affluence of today’s life than the desperation of war-ridden times.

Also fading over the years are the memories of the atrocities of war, the hopes and dreams to overcome them and the strong solidarity and brotherhood that held a family and community together in difficult times.

Fifty-nine years ago today, North Korea invaded the South unannounced on a Sunday morning. I can still remember the tear-filled faces of my father and uncles as they hummed a war song at a humble dinner table with a bottle of cheap liquor. Their tears are mine and everyone else’s on this land. Songs are easily forgotten, but the spirit and pain behind them should not.