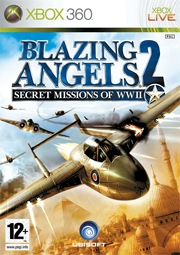 Video games that put a fictional twist on history often are hit or miss.

“Blazing Angels 2: Secret Missions of WWII” for the Xbox 360 is the rare title that falls somewhere in between.

It’s certainly not a miss, but it’s not a runaway hit either. Having said that, it’s fun, and I’d rank it as one of the best flight combat games to date.

Reading about how the Nazis invented experimental jet fighter planes during World War II got me wondering how far both the Germans and the Allied Forces would have gone in terms of creating new and interesting technologies if the war had continued.

And that’s part of the fun of films, novels and video games that deal with historical subjects: We get to explore the “what if?” scenarios.

Having enjoyed the first edition of Blazing Angels, I was more than willing to try the second title. As the name suggests, the folks at Ubisoft created fictional missions, weapons and scenarios set against the backdrop of exotic locations in World War II.

The latest title sticks to much of what made the first edition fun. The controls and game play are enjoyable and simple to pick up.

While the missions in the first edition were straight-forward, and for the most part mirrored the facts we all memorized for that world history class back in high school, the second edition veers off to places like Cairo, the Himalayas, Moscow, Rome, the Swiss Alps, the Baltic Sea and China.

The protagonist in the game is Captain Robinson. As the captain, you must lead a squadron of elite pilots on a mission called “Operation Wildcard” to seek and destroy evil Nazis and disrupt their scheme to take over the world.

There are 18 sub-missions in all, and the game features an assortment of military aircraft from both the Allied and Axis powers.

The graphics, including details of buildings and objects, look solid, and the fictional missions are quite fun. The majority of the game revolves around dogfights, and I have to say that Blazing Angels II has the best controls and rendering of all the flight combat games I’ve played.

The biggest flaw, however, comes at the very beginning of the game. The tutorial to prep gamers on the basic controls is a royal pain. As an aging pilot, you must control your spitfire and achieve 10 goals to start the actual game. However, the entire process is time-consuming, and it gets frustrating in a hurry. Allowing gamers to skip the section altogether would be a huge help. Alas, that option is not available.

The verdict: For those who enjoy WWII games but do not necessarily like the complexity of some of the current titles out in the market, this game is for you.

I wouldn’t go so far as to say this game deserves two thumbs up, but it’s definitely worth a try for those who enjoy speed and action.