A group of Japanese women, who are members of a fan club in Japan for Korean singer-actor Shin Sung-woo, pose in front of a poster for “The Three Musketeers” musical, in which their idol plays a lead role. By Park Sun-young

On a recent Saturday evening, hundreds of people milled about the lobby of Chungmu Art Hall before the start of “The Three Musketeers” musical.

It’s a common scene ahead of any performance. But something stood out about the makeup of the crowd waiting to see this particular show, a Korean version of the Czech musical that recounts the famous story of d’Artagnan and his friends. Sprinkled about the lobby were small groups of Japanese women, most of whom looked like tourists rather than residents.

Perhaps they just happened to want to catch a Korean performance during their visit to Seoul?

“I’ve been a fan of Shin Sung-woo since 2005, and I’m here just to see him perform in the musical,” said Masako Arakawa, a 39-year-old Japanese woman, referring to the famous Korean singer-actor who played the role of Athos in that night’s performance. “Though the musical is entirely in Korean and I don’t understand Korean, it doesn’t matter, as long as I can see him and his performance.”

Arakawa and her four companions, who introduced themselves as members of Shin’s fan club in Japan, said they came to Seoul from Tokyo on a four-day trip mainly to attend the actor’s performances over the weekend. Such trips are becoming routine, not only for this group of women but also for the growing number of people in Japan who are fans of Korean singers and actors. 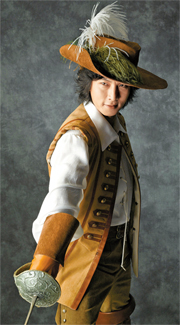 Park Geon-hyeong, a Korean actor starring as d’Artagnan in the musical “The Three Musketeers.” Provided by the organizer

These dedicated fans, willing to travel to Seoul to see their idols up close and personal, are helping to boost the popularity of shows here, according to Yu Seung-jeong, a manager at M Musical Company, the production company behind The Three Musketeers.

“Shin Sung-woo has a large number of Japanese fans due to his long singing career in Japan, while Park Geon-hyeong (also in the Three Musketeers) is a rising star with his TV dramas airing in Japan,” Yu said.

Officials at Chungmu Art Hall echoed that sentiment, saying they have received e-mails from a number of Japanese fans who want to book seats for an ongoing concert program, called “Stars on Stage,” that features famous Korean singers.

Many Japanese fans want to see pop singer Son Ho-young, said Shin Ye-jin, who is in charge of planning performances at Chungmu Art Hall, which hosts various cultural performances including concerts and musicals.

About 5 percent of the 320 seats available for each of Son’s seven performances have already been reserved by Japanese fans, “the majority of whom are regulars rather than one-time visitors,” Shin Ye-jin said. 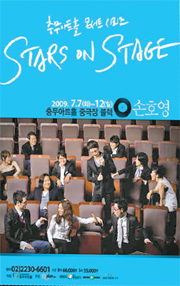 “We’ve noticed that not only nonverbal performances free from language barriers such as ‘Nanta’ and ‘Jump,’ but also those in Korean with local actors are claiming more foreign audiences, too,” she added.

At the recent performance of The Three Musketeers, another group of three Japanese women in their 30’s said they came all the way from Japan to see Park Geon-hyeong, the other big-name Korean actor starring in the musical.

“It costs about 40,000 yen ($415) to make this trip to Seoul, but I don’t regret spending the money at all,” said a woman who identified herself only by her given name, Tomoko, adding that she had already seen the show four times. “Korean actors, including Park, act so well that I hardly have any difficulty following the story even though it’s only in Korean.”