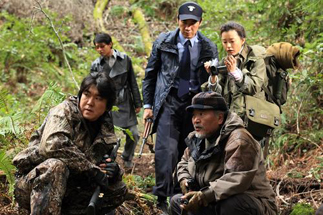 The ultimate fight between five hunters and a bloodthirsty boar is set to hit screens on July 16.

“Chaw,” which means “trap” in the Gyeonggi and North Chungcheong dialects, and seems to aspire to “chow” in English, is an action comedy that tells the tale of a wild boar gone bad that has developed a taste for human flesh.

The story begins in the tranquil town of Sammae, which has managed to stay crime-free for the last 10 years.

Things start to go horribly wrong after the townspeople find a body that has been ripped to shreds.

When it is discovered that the perpetrator of this horribly ferocious crime is none other than a mutant man-eating boar, the town is torn apart, with all of the bloodcurdling screams, wild running and general chaos that could be expected after such a calamitous event. But the idea that a single creature could destroy the town’s peace and quiet also serves to unite the townsfolk, and they band together to hunt it down.

Why anyone would want to go after such a repulsive creature may be a mystery to some, but the five hunters who set off in search of the hairy beast seem to have secret motives all their own.

Representing the long arm of the law are police officer Kim (Uhm Tae-woong), who joined the squad to find his missing mother, and detective Shin (Park Hyuk-kwon), who just wants to solve the case.

Joining them is a motley crew of individuals who just happen to have a skill set suitable for any boar-catching expedition.

Cheon Il-man (Jang Hang-sun), a legendary artillerist, comes along in hope of avenging his granddaughter. And why have just one marksman when you can have two? Cheon is joined by Baek Man-bae (Yoon Jae-moon), a professional gunner from abroad.

Byeon Su-ryun (Jung Yu-mi), an assistant to an ecology professor, is - like so many of us are - hoping to write a groundbreaking thesis on boar mutations.

The movie trailer shows the group racing through the dark into forests and an abandoned mine - backdrops that are also essential to any boar-gone-bad action thriller.

Director of computer graphics Hans Uhlig, who was also involved in the making of “Star Wars: Episode VI: Return of the Jedi,” “The Day After Tomorrow” and “The Perfect Storm,” uses his considerable talents to enliven the boar’s fierce eyes and blood-stained jaws to chilling effect.

Chaw was well received at the Berlin Film Festival earlier this year, and it is scheduled for release in a total of 15 countries including Germany, Switzerland, India, Singapore and Thailand, with deals in America and Japan still in the works.