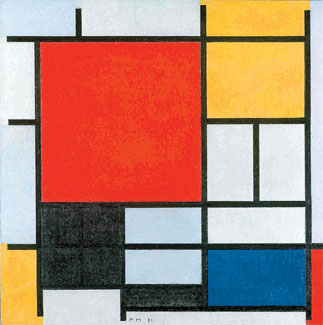 The main character in the black comedy “My Scary Girl” (2006) is undermined by the artist Piet Mondrian.

Mi-na (Choi Kang-hee) appears to be sweet and cultured, claiming she majored in fine arts, but in a later scene with the film’s hero Dae-woo (Park Yong-woo), we find out that she has not heard of the abstract art pioneer Piet Mondrian (1872-1944), a fixture in modern art history classes. 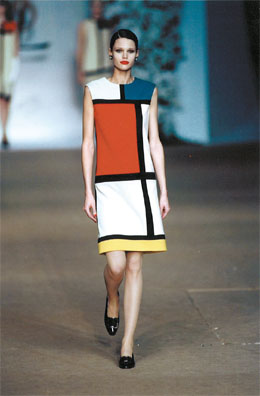 In another scene, Dae-woo looks aghast at a reproduction of a Mondrian painting hanging on a wall in Mi-na’s apartment. He suddenly takes it down, turns it upside down and hangs it back on the wall.

The painting had been hung upside down.

The scene made me laugh, but at the same time I felt guilty. I know about Mondrian and his art, but I am not 100 percent sure I would be able to say whether one of his paintings was the right way around if I were seeing it for the first time.

In fact, the only clue to be sure which way around the painting might be the artist’s initials on the side of the piece.

And another question occurred to me after watching this scene. If Mondrian had seen his own painting hanging upside down, would he have been upset? Or would he have just shrugged it off?

If Wassily Kandinsky (1866-1944), a Russian-born painter also regarded as a pioneer in abstract art along with Mondrian, saw one of his pictures incorrectly placed on a wall, he would have certainly been generous in his reaction, I think. 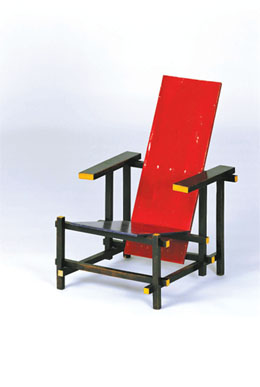 There’s a well-known story that says Kandinsky once entered his studio at dusk to discover an unfamiliar painting in the corner. He was greatly impressed by the harmonious beauty of the colors and the complex forms and lines, and only later realized that the painting was one of his own, upside down.

Afterward, he is said to have recognized that paintings don’t have to copy nature. In other words, they don’t have to have representational forms as they can achieve pure beauty with forms and colors independent from reality.

As for Mondrian, however, I don’t know whether he would think it would be acceptable for his work to be hung upside down. He pursued not only an aesthetic ideal but also a quasi-spiritual order in his work.

Can you believe that his painting (top), which resembles a section of piled-up red, blue and yellow Lego blocks, is a kind of religious picture?

Mondrian was fascinated with the theosophical movement that developed during this era. Its supporters tried to approach the immortal essence of God and the universe through meditation and intuition. Inspired by theosophy, he sought to express the simple, fundamental and unchangeable beauty and truth lying under nature’s complicated forms and colors through the use of grids of vertical and horizontal black lines, the three primary colors and white space.

In addition, he sought to express spiritual harmony and balance beyond plain materialism.

What is interesting is that the work of Mondrian, with such serious religious intentions, appeals to the masses more than that of any other abstract artist. Was it just a coincidence that the ignorant heroine in My Scary Girl chose Mondrian among numerous artists to decorate her apartment? I don’t think so.

As for me, I hated abstract art when I was younger, but strangely, I liked Mondrian very much. Perhaps the contrast of the red, yellow and blue with the black lines of the grid, which are redolent of a comic book layout, are charming even to children.

This could be in accordance with the pursuits of the De Stijl art movement and group, of which Mondrian was a member. The group of Dutch artists, whose name means “The Style” in English, dreamed of art that was essential and completely universal, so that it could win the sympathy of a person with any cultural background, which would include children as well.

The De Stijl artists had ambition to fill the world with not only paintings but also buildings and furniture, among others. The “Red Blue Chair” (left) by Gerrit Rietveld (1888-1965), an architect of the De Stijl group, is representative of this ambition. The chair looks like a three-dimensional version of a Mondrian painting.

Such chairs could not dominate the world. The complaint was that the sitter’s hips would have to be rectangular. Well, many people might want to decorate their living rooms with this chair but few would want to sit on it.

As art critic Robert Hughes once said, it is easy for strict art to stay on a canvas but it is difficult to translate into the territory of designs since they have to interact with imperfect nature.

Mondrian’s work doesn’t exist only on canvas. It is used to design everyday things.

The most famous is the “Mondrian” day dress (center) unveiled at the 1965 Paris Collection by the French fashion designer Yves Saint Laurent (1936-2008).

In a more corporate example, many Koreans remember that the logo of KorAm Bank, which was taken over by U.S.-based Citigroup in 2004 and is now Citibank Korea, resembled Mondrian’s “Composition” series.

The influence of Mondrian can also be found in other items ranging from building decorations to cigarette case patterns, here in Korea and in other countries.

Mondrian seems to appeal to people of all ages and of both sexes in all times and places.

Why? The contrast of the three primary colors can be childish, depending on the arrangement. But, in Mondrian’s works, it looks refined and sophisticated with exquisite asymmetric balance and space. That’s why, perhaps.

If Mondrian could see these pieces, would he be happy at the fact that he won nearly universal sympathy for his art, or be sad that most people don’t know the theosophical and spiritual aspects of his art?