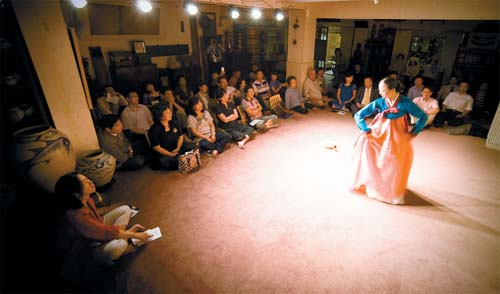 With neither a stage nor assigned seats, audience members watch a traditional dance performance at Gareheon in Sindang-dong, Seoul, on June 11. By Kwon Hyuk-jae

There are now a number of places around the city where the curious can stop in to catch a house concert. Here are just a few.

Park Chang-soo first started dreaming of hosting performances at his pad when he was just a student at Seoul Arts High School. Twenty years later, in 2002, he turned the second floor of his home in Yeonhui-dong, central Seoul, into a performance space.

Since then, roughly 600 musicians and 12,000 people have stopped by his home. The guest list varies, from pianist Kim Sun-wook to rock star Kang San-ae.

“It’s a pleasant feeling to be on a stage so close to the audience,” remarked Austrian pianist Jorg Demus. “I will definitely visit [Park’s place] again when I come back to Korea,” he added.

The evening begins with a performance, but the fun doesn’t end there. After the curtain comes down, the wine comes out and artists and audience members are free to mingle. Later, anyone who wants to put their talents on display can take the stage.


*At Gareheon, a Korean folk music center located in Sindang-dong, central Seoul, traditional Korean music is the focus of the “Thursday Night House Concerts” held every week. The event starts with a potluck dinner and tea, followed by a concert and an afterparty. Park Jeong-uk, the owner of the center, occasionally performs with his troupe. Visitors can also view the calligraphy and antiques exhibited around the space.


*The Dolce recitals, which began in 1999, were some of the first house concerts in Korea and have since become legendary among classical music lovers.

On the rainy evening of June 20, the Nova Trio, a group of three women on violin, cello and piano, held a concert in Ilsan, Goyang.

Kim Sa-gang, the violinist of the trio, commented that she was more nervous performing at the Dolce recitals than at big concert halls in Seoul. “The audience here has sophisticated manners and high expectations,” Kim remarked.


*Open Studio 21, located in Yeoksam-dong, southern Seoul, opened its doors last November and now holds ensemble performances twice a month. The founders, pianists Choi Soo-yeon and Bae Eun-kyung, who have been best friends since elementary school, donate the proceeds from their house concerts to charity. Guest performers donate their time and appear on stage for free. After the show, the audience can spend time talking with the musicians as they enjoy dinner.