The art of Yen: Redefining gugak

The art of Yen: Redefining gugak 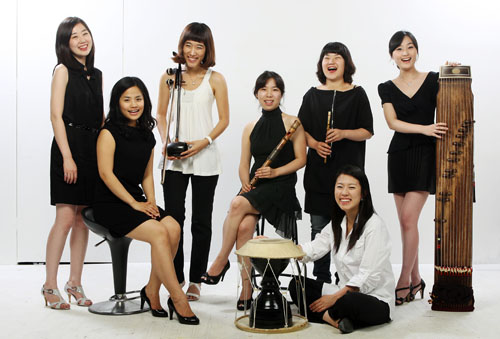 Decked out in formal clothes, the seven women tried to strike the most professional, serious poses possible in front of the camera.

This being a group of fun-loving, giggly, 20-something musicians, though, it didn’t take long for the jokes, laughter and all-around goofiness to surface.

What else would you expect from the Korean band Yen, which is bringing a high-octane pop attitude to a decidedly tame genre of music? Made up of young, amicable and extremely talented girls, Yen is turning gugak ? traditional Korean music ? on its head. Aside from simply making music, the women of Yen also dance, act and - perhaps most notably - know how to have a little fun on stage.

Some older gugak masters have expressed concern about whether these high-energy girls are “tainting” the music. But the criticism doesn’t seem to bother the members of Yen at all.

The women say the group’s look and attitude resemble Girl Generation ? one of Korea’s famed girl pop bands ? but that the music is more along the lines of Jang Ki-ha and the Faces, an underground folk-pop act.

Yen’s history dates back to 2003, when the girls were freshmen in college. A couple of them who went to Gugak National High School got together to practice and learn more about gugak.

“Because we went to the same school, people think that we selected members based on where they went to school,” says Kim Mi-so, 25, the leader of the bunch. “But we recruited our members strictly for their talent.”

The following year, Yen had its debut performance, which is when the women determined they had to do something different to appeal to a broader audience. The style they decided on involved staying away from existing gugak pieces as much as possible and seeking a crossover with other genres, the women said.

It’s proved to be a successful mix. In 2005, Yen won the grand prize in the Creative Gugak Competition, which was part of a festival organized by the Ministry of Culture, Sports and Tourism.

Hoping to make the group’s stage shows more dynamic and entertaining, some members signed up for acting lessons, while others learned to tap dance.

The following year, Yen held a concert, dubbed “Yen Becomes Gisaeng,” that created quite a stir in gugak circles. Gisaeng refers to professional female Korean entertainers of old who danced and recited poetry for the court and wealthy male patrons.

Some people criticized the group at the time, saying that the gisaeng element brought down the dignity of gugak music.

But the show helped put Yen’s name on the map, and the group has continued to develop and strengthen its niche since then. Yen has held shows at hot clubs and performed with a hip-hop DJ and a cinema music producer, among other notable people in the music industry.

“We realized that gugak can be more like gugak than ever when mixed with more public-friendly genres like hip-hop and classical,” Kim said.

“It’s misleading to say that gugak is boring,” Kim said. “The reason for our existence is to make a type of gugak that today’s generation can understand and enjoy.”