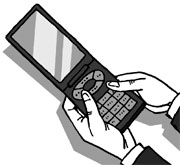 Before the fall term began in 2000, the admissions office at the University of St. Andrews in Scotland was swamped by a cascade of applications from Europe as well from across the Atlantic. The 600-year-old school’s sudden ascent to the limelight was thanks to Prince William, son of Prince Charles and the late Princess Diana, who was to attend the university the following year.

Throughout his college days, flocks of female fans would follow the world’s most famous bachelor wherever he went on the campus. On one occasion, he tried to sneak out for a quiet drink with his chums at a pub, but was soon joined by a hundred frenzied young women. A Scottish newspaper trailed these young women to find out how they always managed to swarm around the prince within seconds. The trick was through cell phone text messages.

Electronic networking, when met with a political cause, proved particularly powerful in 2001 when the single text, “Go2 EDSA, Wear Black,” summoned hundreds of thousands of Filipino protestors to the EDSA Shrine to rally against disgraced President Joseph Estrada. In just four days, more than 1 million would congregate, provoking one political commentator to observe that it was as if a mob of protestors had been “delivered” like a pizza in 30 minutes. The outcome was that the “thumb tribe” had spoken: Estrada was ousted.

These “smart mobs,” as coined by tech writer Howard Rheingold, are a self-organizing group of people brought together by electronic devices that enable them to “act together in new ways and in situations where collective action was not possible before.”

Ever-evolving technological progress has now equipped mobile phones with video cameras and Internet accessibility, emboldening and strengthening the smart mobs to make inroads into the realm of journalism.

Twenty years ago, a stunning image from AP photojournalist Jeff Widener, showing a man standing in front of a column of tanks rumbling past Tiananmen Square alerted the world of the tyranny in China at that time.

Today, the image of a young woman named Neda Agha-Soltan bleeding to death on a Tehran street has became the symbol image of the latest Iranian protests.

Amid strong censorship, mainstream foreign media like CNN and the BBC have little choice but to rely on the work of protesters on the streets. They are no match for these mobile mobs in speed and accessibility.

Although collaboration between professional and so-called “amateur journalists” appears inevitable, just how we should accommodate unfiltered sources of information and discern real news poses a new challenge for everyone.

The writer is an editorial writer of the JoongAng Ilbo