Succumbing to the power of suggestion

Succumbing to the power of suggestion 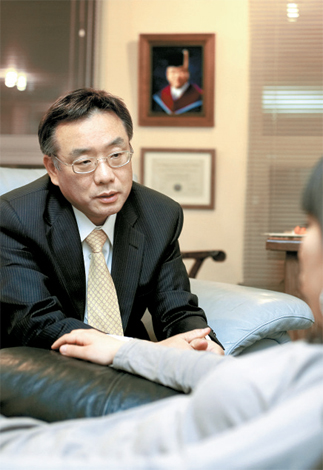 Dr. Seol Gi-mun works with a subject under hypnosis. Seol says that subjects generally remain in a conscious state throughout the hypnosis procedure.

Byeon Yeong-don is a doctor of neuropsychiatry and one of the few medical professionals in Korea who believes that hypnosis can be effective in treating patients. His trust in hypnosis led him to form the Korea Hypnosis Treatment Association, which today has 80 members.

While the majority of Korean psychiatrists and scholars do not believe in the effectiveness of hypnosis, doctors like Byeon argue that it is a tool that can be used to treat various diseases or habits, ranging from smoking to overeating. This is especially true if doctors use hypnosis to complement their area of specialization and aim for a synergistic effect during the treatment process.

“This is about exploring the world of the unconscious and searching for the roots of what has caused a person to become ill. Then the ailment can be treated using hypnosis,” said Byeon.

Yun In-young, a doctor at the Seoul National University Bundang Hospital, is also a firm believer in the use of hypnosis to treat various ailments. 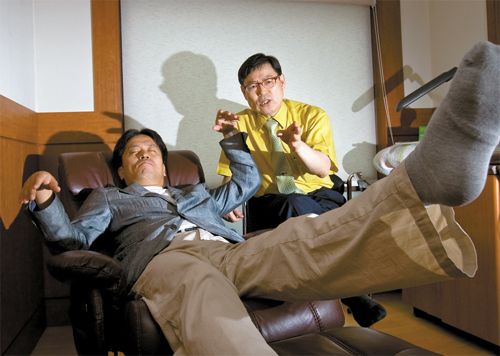 Byeon Yeong-don, a neuropsychiatrist and the founder of the Korea Hypnosis Treatment Association, uses hypnosis to help treat a variety of ailments. [JoongAng Ilbo]

Yun cited a recent case in which a patient suffering from “conversion disorder,” a condition in which the patient is afflicted with a temporary physical disorder caused by a critical psychological conflict, was eventually cured. The patient was not able to speak or walk for six years because of personal problems at home. But with hypnosis treatment, the patient was talking again after only three weeks and walking in another three months.

“With conversion disorder or loss of memory, hypnosis is often the only way to a cure,” the doctor said.

Nevertheless, Yun said that there are only a handful of doctors in the country able to use hypnosis effectively in their treatment regimens. Korea officially recognized hypnosis as a form of medical treatment in 1987.

But psychiatrists and scholars have remained somewhat skeptical about the effectiveness of hypnosis, arguing that there is no scientific proof that it works.

“It could be helpful, depending on the patient, but it’s not a general treatment method,” said Lee Heon-jeong, a psychiatrist with the Korea University Anam Hospital.

Since hypnosis is still shrouded in mystery, experts like Seol Gi-mun, a psychologist, pointed out that some of what is known about the treatment among the general public is a myth.

“People may think that a hypnotist can do whatever they want with a person that has been hypnotized but that is a misconception,” the doctor said, adding that a person is still very conscious while under hypnosis.

Seol said that there was no danger to the hypnotized person, who only has to concentrate and immerse him or herself in the process.

In response to the commonly asked question of whether the subjects of hypnosis are unable to “awake” from a hypnotized state, the doctor, reflecting on his own experience, said that does not happen because the subject remains in a state of consciousness throughout the whole process.

Today, hypnosis is also used as a crime-fighting tool. For instance, the Seoul Metropolitan Police Agency has a special room set aside for hypnosis on its third floor.

The room, which contains two chairs, one for the hypnotist and another for the subject, is used to get suspects and witnesses to relax. With luck, the procedure will help them recall details of an event they have tucked away either because of stress or trauma.

The room is adjacent to another room with a lie detector that is used if criminal suspects are undergoing the procedure.

Hypnosis offers no guarantees, but can provide valuable leads to help solve cases.

In November 2007, a hit-and-run accident involving a white passenger car that had hit a motorbike was solved with the help of hypnosis.

At first, neither the victim nor the witnesses could remember anything but vague details about the physical appearance of the driver of the passenger car, whom they described as a “man in his mid-30’s, medium build, not wearing glasses,” which didn’t help much.

But when Kim Sang-hyun, an officer with the forensics unit, took up the case, the missing pieces fell into place. An expert in forensic hypnosis, Kim was able to help the witnesses refresh their memories of the crime scene.

The car was identified as an SM5 sedan made by Renault Samsung Motors, and witnesses identified the numbers 0, 5 and 2 as being part of the vehicle’s license plate. Based on that information, police were able to close the case.

Still, Kim points out that hypnosis is not a cure-all.

“If you don’t want to be hypnotized, then it doesn’t work,” said officer Kim, one of the three experts in his field in the Seoul area. “I think it’s only worked with roughly half the subjects I’ve hypnotized.”

The Korean police have officially acknowledged forensic hypnosis as an investigative tool since 1999; there are now 30 specialists in the country.

The Seoul Metropolitan Police Agency used forensic hypnosis in 15 cases last year and eight this year. But as is often the case with medical treatment, hypnosis is used in the latter stages of an investigation, when everything else has failed.

The technique is frequently used in rape cases, where victims are often too traumatized to remember a suspect’s face or simply don’t want to remember.

“Sometimes, if they can’t remember the suspect’s physical appearance, we get their agreement to try hypnosis. One time, the victim just started to remember everything and suddenly let out a scream that shocked everybody in the room, including the detectives,” Kim said.