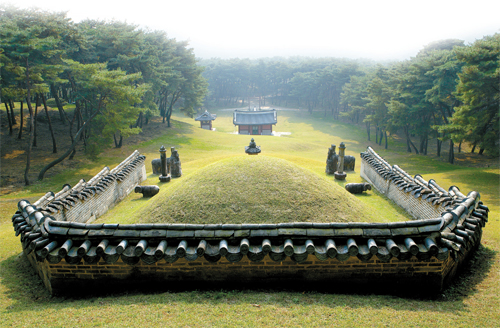 This photo is the view from Sareung, at the tomb’s summit.Provided by the Cultural Heritage Administration

Seonjeongneung, a combination of the ancient royal tombs Seolleung and Jeongneung, sits like an oasis in the midst of the busy, commercial district of Samseong-dong, southern Seoul. On weekends, families stroll around the area, push baby carriages or lie down on the wide green lawn radiating around it. For the casual visitor, it is more park than historic site.

But recognition of these and Korea’s 38 other Joseon Dynasty (1392-1910) tombs as important historical landmarks increased exponentially when Unesco designated all 40 of the country’s tombs as World Heritage sites on Friday.

Korea’s Cultural Heritage Administration also gave the sites a boost by waiving admission fees for the tombs through July 12, and the number of visitors to Seonjeongneung alone has increased by 33.5 percent to 2,162 on Sunday from a week ago. Most tombs have seen similar increases.

Geonwolleung is the resting place of Joseon Dynasty founder King Taejo. Entrance to the tomb’s ceremonial area is through the red gate, top. The photo above shows the T-shaped shrine leading from the gate up to the tomb and an accompanying pavilion.

“It usually takes over three hours to discuss the listings for some of the more contentious sites,” said Kim Hong-dong, international affairs director at the administration, who attended the session. “With many committee members backing the tombs, [passage of the resolution] took just 15 minutes.”

Maria Jesus San Segundo, who chaired the session, finished the review quickly and 15 of the 21 World Heritage Committee members supported listing the tombs.

The addition of the tombs to the list was highly anticipated since the International Council on Monuments and Sites, or Icomos, had recommended incorporation of the tombs in April after an extensive evaluation last September.

Of the 29 sites in the world seeking the committee’s recommendation, only 10 received it, including the tombs.

The heritage administration’s efforts had paid off. The tombs were added to a tentative list for Unesco acceptance on Dec. 30, 2005, and then went through a formal review process. Following that, the administration submitted a formal application on Feb. 1, 2008.

Korea has 5,000 years of history but we have fewer World Heritage sites than the United States, which only has 200 years of history,” said Lee Chang-hwan, a professor of landscape architecture at Sangji Yeongseo College who was involved in the application process. “We haven’t made enough efforts to enlist our cultural assets.”

Not all efforts to bring recognition to Korea’s historic sites were as successful. The International Union for Conservation of Nature, or IUCN, which is Icomos’ counterpart in evaluating natural world heritage sites, refused to recommend a Cretaceous dinosaur fossil site on the South Jeolla coast and Korea withdrew its application for the site.

The 40 tombs named to the list belong to 27 kings and queens of the Joseon Dynasty, with some serving as burial sites for royal couples.

They are scattered around 18 locations in Seoul and the Gyeonggi and Gangwon provinces. The city of Guri in Gyeonggi has the most, nine, including Geonwolleung, which belongs to King Taejo (1335-1408), the founder of the Joseon Dynasty, and there are eight tombs in Seoul.

There are two other royal tombs in North Korea, but these were not included on the Unesco list.

The tombs were once symbolic of the royal family’s authority and are representative of the Confucian values of the time.

Their locations were determined based on Confucian principles and feng shui, and they were placed in natural settings, usually with one side protected by a hill and the other facing out over a body of water or a distant mountain ridge.

“The tombs were places where the political philosophy of Joseon was expressed,” said Lee, the Sangji professor.

The tombs were also placed close to the capital to make it easy for kings to hold ancestral rituals on site, although they were situated away from residential areas or farms to maintain the solemnity of the surrounding atmosphere.

With the exception of Hureung in North Korea, Yeongnyeongneung in Yeoju and Jangneung in Yeongwol County, all of the tombs are located within 40 kilometers (25 miles) of central Seoul, which was once the Joseon capital, as stipulated in the Gyeonggukdaejeon, Joseon’s code of law.

The tombs consist of a ceremonial area and the burial mounds. A red gate leads into the ceremonial area, the centerpiece of which is a T-shaped wooden shrine. There is also a place for stele, or memorial stone markers, and a guard’s house nearby.

The shrine sits facing the burial mounds, which are placed on a hill and therefore higher than the shrine and its gate.

“The burial mounds for ancestors and the shrines for descendants are distinguished by the difference in the levels of the ground on which they sit and indicates [the degree of] respect that should be given to those buried in the tombs,” Lee said.

The burial mounds are surrounded by stone sculptures of people and animals, which are there to protect the tombs and their occupants. The sculptures and the fine carvings decorating them are indicative of Joseon-era art and craftsmanship.

“Like the Taj Mahal in India and the pyramids in Egypt, the tombs were representative of the architecture and landscape design of the time,” Lee said.

“In most cultures, humans place the utmost importance on the places where their ancestors are buried,” he said.

Because of that, there are many other tombs in the world listed as World Heritage sites, Lee said.

According to the Cultural Heritage Administration, the Joseon tombs satisfy four of the 10 criteria needed for listing as World Heritage sites. First, they represent the development of architecture, gardens, sculpture and landscape design of a single culture; second, they date back hundreds of years and are very rare; and they represent an architectural style resulting from philosophical, cultural, social, artistic and scientific development.

For a monarchy that ruled for over 500 years to have maintained the tombs so well for so long is a testament to just how rare they are.

“It was because the dynasty endured for so long that the tombs have been so well preserved,” Lee said.

In addition, the tombs are made of concrete-bound stones, making entry virtually impossible, which helped protect them from theft. In fact, the tombs’ stone chambers have still not been opened, but historic records show that even if an enterprising thief were to have broken through the stone barrier, they would not have found much of value.

“The Silla Dynasty [57 B.C.-A.D. 935] tombs contain valuable items such as crowns, but imitations were placed in the Joseon tombs to protect them from theft,” said Chung Jae-hoon, a professor of traditional landscape architecture at the Korean National University of Cultural Heritage.

The tombs are also unique compared with those in Confucian countries, including China, in that they were deliberately placed on hills or mountains and were designed to harmonize with the land around them. Those in China, for example, were built on flat land with less regard for the surrounding environmetn.

“Joseon was a Confucian state and paying tribute to one’s ancestors was very important,” said Lee, the Sangji professor. “Ancestral ceremonies were held at the tombs twice a year, so the tombs had to be well maintained.”