Tips and tricks for a stress-free summer getaway

Tips and tricks for a stress-free summer getaway 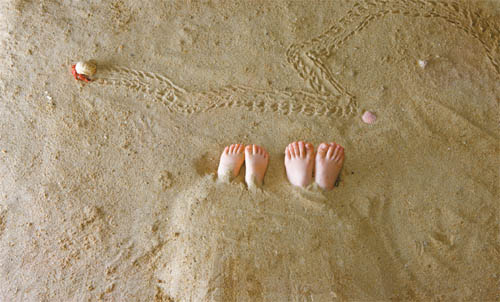 The key to enjoying a relaxing vacation is advance preparation. By Kwon Hyuk-jae

It s vacation season in Korea. Shops and factories are closing up and people are hitting the road to escape the city heat.

But getting out of town often proves more difficult than expected and any number of problems may arise along the way.

The first problem is traffic. Though would-be vacationers may have hopped into their cars full of great expectations, what awaits them is bumper-to-bumper traffic. Congestion is so dense during this time of year that drivers may not be able to get out of Gyeonggi Province even after a few hours.

By the time they arrive at their destination, the sun is setting. Thankfully, any bad feelings about the long hours on the road and even the unreasonably expensive dinners are put aside when they think about spending the night at a cozy hotel.

But the real kicker is yet to come all of the rooms are full and they have no reservations. Who would have guessed that hardworking Koreans were so big on vacations?

Some of these unfortunate souls will probably end up at a love motel, with room rates that are nearly double during peak season, up to 100,000 won ($79) per night. Meanwhile, they will be facing the prospect of a night in a room equipped with suggestive lighting and forms of entertainment that are less than family friendly.

For many of us, the story is a familiar one. Unexpected troubles during the holidays may be inevitable, with roads and accommodations crowded by company vacation trips on top of the peak-season rush toward the end of July and beginning of August. But such troubles can be avoided with a bit of strategic planning.

Here, we give you a few tips and tricks for cost-effective family and group accommodations to traffic-free train journeys for a vacation you can truly enjoy.


Staying in the heart of the forest

A popular destination for families during the summer months is one of the nation s many recreational forests. These are special areas within national or private forests reserved for camping or leisure activities. They contain tracking routes, campgrounds, lodges and convenience facilities.

There are 121 recreational forests spread around Korea, with 38 owned and managed by the Korea Forest Service, 66 by regional governments and 17 that are privately owned.

If you go, the best place to stay is in the wooden lodges dotting the landscape of the state-owned forests. The facilities there are comparable to those at moderately priced hotels and room rates are relatively cheap. But only those lucky enough to win a ticket in an online raffle can stay there.

Raffles are held between July and August and applications can be made online at the official homepage of the National Natural Forest Management Office: www.huyang.go.kr. Winners are announced around 6 p.m. on the same day the application is made. Only one raffle application per person is allowed and the winners must pay the accommodation fee by July 16.

The July application period is already over but vacationers can still get what is left on a first-come-first-served basis. Last year, there were 9.8 applicants per opening for August.

The most competitive was the Gorani Room in Gapyeong Recreation Forest on Mount Yumyeong in Gyeonggi Province, recording 282 applicants per opening on Aug. 2, the peak season, last year.

Lodges in the forests owned by the regional governments and lodges in privately owned forests are available on a first-come-first-served basis. The information on these lodges and surrounding areas can be found at www.san.go.kr.

State-owned lodges cost 40,000 and have space for four to five people per night. Privately owned lodges or those owned by regional governments are more expensive.

For more information, call the National Natural Forest Management Office at 1588-3250 or the Recreation Forest for Refreshing Life association at (042) 586-9714.

If you can t find the right lodge, you can always camp out. Spending some cozy time together inside a tent with friends or family may not be such a bad idea, and the backdrop of the mountain scenery and clean air may be just what is needed for a summer holiday.

Every recreational forest has camp grounds. Some even offer jumbo-sized Mongolian style tents while others have parking and facilities for recreational vehicles. 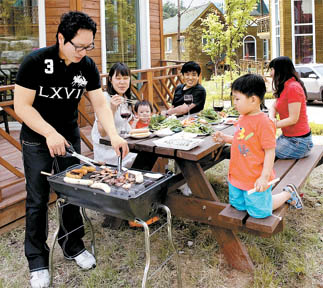 A family has a barbecue at the Carpe Diem pension in Yongpyeong-myeon, Pyeongchang County, Gangwon Province. By Cho Yong-chul

Campground lodging is available on a first-come- first-served basis and costs 10,000 won, including parking and admission. More information can be found at www.san.go.kr.

Another option is to stay at a pension or inn. Pensions have become some of the most popular kinds of vacation facilities in Korea in recent years for families and groups both large and small. Pensions are generally akin to accommodations in a furnished apartment with a full kitchen, living room and separate bedrooms.

The pension marketing company PlaceM lists 300 pensions on its Web site, www.pensionlife.com, where you can sign up for a free membership and get a 5 to 10 percent discount on your next reservation. For more information, call 1544-7317.

Youth hostels are known as the choice of backpackers worldwide. But they can also offer cost-effective family facilities. Most youth hostels offer a choice of rooms with bunk beds, larger rooms for one or two persons, and family-sized rooms. The biggest advantage of staying at a youth hostel is that they are located close to popular tourist sites. There are 78 youth hostels throughout the nation.

Last year, there were 50,000 members, and 40 percent of the members had family memberships. You can become a member by going to the Korea Youth Hostel Association Web site at www.kyha.or.kr, or calling (02) 725-3031.

These have rooms for four to five people, with a private bathroom and cooking facility. Since most youth hostels today have family rooms, there is more information available online. 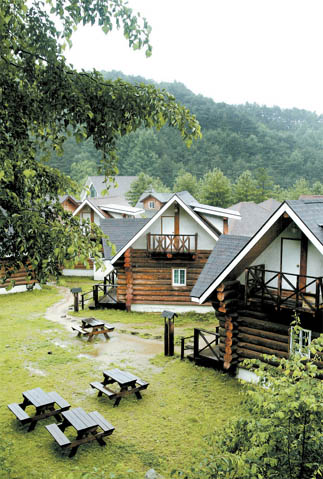 The worst thing about the vacation season is the traffic. What s even worse is that you are basically stuck unless you leave your car. So why not leave your car? Korail has several railway packages at www.korail.com.

One of the best ways to explore the historic southern city of Gwangju, for example, is to avoid the traffic and take the train from Seoul to Gwangju and then rent a car or bicycle to get around. Gazing out at the verdant scenery whizzing by the train window as you relax is a great way to see the Korean countryside.

Another popular railway package puts you on the Coastline Train, which traces the east coast of the peninsula in Gangwon province. All train seats face the window. The train route is 58 kilometers, starting from Gangneung station and stopping at Jeongdongjin, Mangsang, Mukho, Donghae and Chuam, on through to Samcheok. The journey lasts 1 hour and 20 minutes and you can get on and off as you like. A one-way trip from Gangneung to Samcheok costs 15,000 won, and the train s Romantic Proposal Room costs 50,000 won, with wine and photographic services provided. The train runs three times daily.

The Wine and Ginseng Train is a one-day package developed from the Wine Train that started running in March. The train departs from Seoul Station at 8:40 a.m., stops by a winery in Yeongdong County, North Chungcheong, and continues its journey to the ginseng market in Geumsan County, South Chungcheong. The journey concludes at 8:20 p.m. when the train pulls back into Seoul Station. With various events and programs offered inside the train, including free wine tasting and wine classes, it is a fun and entertaining trip. The cost is 59,000 won per person. For reservations or for more information, visit Wine Korea on the Korail homepage, at www.winekr.co.kr, or call (043) 744-3211.