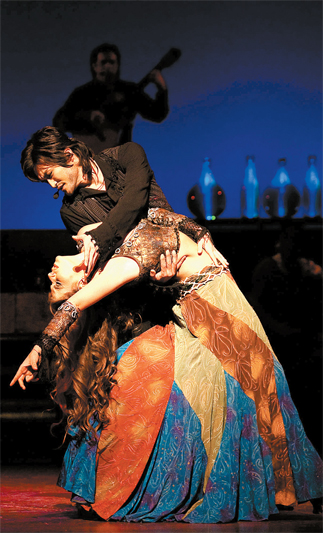 Don Juan, played by Kang Tae-eul, seduces a dancer in the musical “Don Juan.” Provided by the organizer

Want to see some flashes of fiery flamenco, the scenery of Seville and a heartbreaking love story involving one of history’s most notorious womanizers?

Look no further than the upcoming musical “Don Juan,” which debuts in Seoul this weekend.

Although fictitious, Don Juan is a spitting image of the legendary Giacomo Casanova (1725-1798), at least when it comes to seducing women.

And just like Don Quixote, Hamlet and Romeo, Don Juan belongs to an elite echelon of timeless characters whose stories have been told time and time again in novels, plays and musicals. 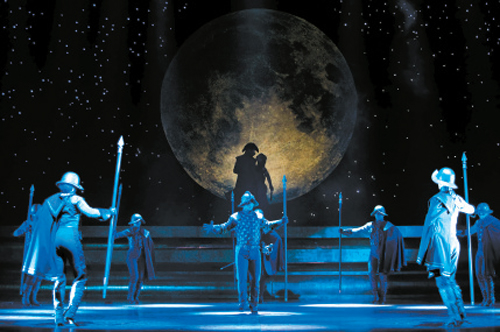 A romantic night scene from the musical

Koreans will now have a chance to get up close and personal with history’s infamous l’homme fatal in Felix Gray’s musical version of Don Juan.

Gray, a French singer, composer and lyricist, has been mesmerized by this legendary libertine for some time, which led him in 2003 to write and compose his own adaptation of the Don Juan story.

The musical was performed in Korea three years ago as part of celebrations surrounding 120 years of diplomatic relations between Korea and France. At that time, a French and Canadian cast and the Latin band Los Amigos took center stage.

This time around, the cast consists of Korean and Spanish performers.

“We admit that we were a little bit concerned as to how the musical would turn out with these two elements, Korean actors and Spanish dancers,” said Julie Kim, a manager of the musical’s organizer, NDP Korea. “But it seems they somehow create a unique harmony together.”

The same Korean-Spanish cast, with slight changes, took center stage in February at the Seongnam Arts Center in Gyeonggi. Organizers say the show was a success, with over 90 percent of the seats full. That’s exactly why they decided to bring it to Seoul just five months later.

Because the musical will be performed in Korean, organizers say that local audiences will find it easier to relate to the emotions of the characters.

At the same time, though, they won’t miss out on any of the ethnic Spanish elements of the story, which are pretty pivotal in the tale of Don Juan.

The seven main performers sing a total of 41 songs - there are no spoken lines. Some, like the love duets Don Juan and Maria exchange, are chanson-style with sentimental lyrics, adding to the romantic feel of the musical. Other scores leave a stronger impression, incorporating powerful and energetic Latin rhythms.

In order to highlight the footwork of the flamenco dance, organizers have set up a wooden stage that’s 40 centimeters (15.7 inches) thick. The stage also transforms to a bullring and a romantic bar in Seville.

Adding yet more energy and colors to the stage are some 130 moving lights and Spanish-style costumes that embrace both traditional and modern fashion.