Grandma gets the kids

Grandma gets the kids 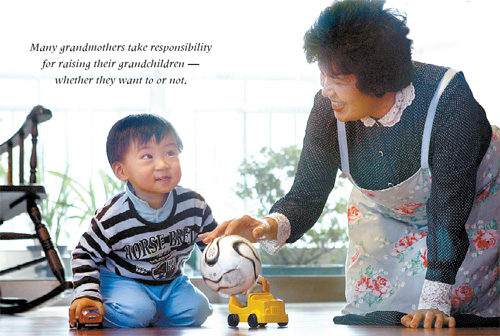 Forty-two salt and pepper-haired women in their 50s and 60s gaze at a woman standing in front of a whiteboard on a weekday in May. During the two-hour lecture, pens fly fast to jot down the teacher’s words at a public health center in Seocho District, southern Seoul.

One glance at the women’s notebooks reveals that this is not part of the usual continuing education curriculum favored by women of their age, which usually consists of aerobics, origami and karaoke-singing lessons.

These women are learning how to bathe newborn babies, how to deal with neonatal jaundice or choking, and other necessary skills for taking care of a newborn baby. The class is called “How to Be a Good Grandma.”

“Each class was supposed to accommodate 30, but the registrations poured in, so we increased the seating capacity to 42,” said Yang Jeong-ae, who started a child care class at the mother and child health department of the Seocho public health center.

“I’d been working in this department for the past five years, and during that time I saw so many grandmothers taking care of their grandchildren that I thought it would be great to provide them with some tips on child-rearing because a lot of them are not up on the latest child care techniques,” said Yang.

She says she still gets inquiries from women in their 50s and 60s who live in different districts but want to enroll in the class.

At Pureuni Childcare Center, on the third floor of the SK Telecom headquarters, Jung District, central Seoul, there is always a group of grandmothers waiting to pick up their grandkids.

“Since my son and daughter-in-law both have full-time jobs, they can’t come here at this hour to pick up their son. I’m the one taking care of this little one, so coming here is now part of my daily routine,” said Kim Jeong-soon, 66, who had her grandson’s hand in hers and was juggling his small backpack with the other.

Even though the Pureuni center is an in-company facility, around half of the kids are picked up by their grandparents, the teachers there say.

“Parents can’t finish their work at 6 p.m. sharp [when the center closes], so many of them have to turn to their parents for help,” said Yoon Se-kyung, a teacher at the center who’s been working there since it opened three years ago.

Why are so many grandparents, and particularly grandmothers, charged with the role of child care in Korea?

One reason might simply be a result of modern life. There are more women in the workplace, and they are choosing to stay longer, delaying marriage and childbirth. For some, economics might be a factor. In addition, there are concerns about a lack of safe, reliable child care facilities.

Last year, the central government introduced a child care leave system for salaried workers, allowing both mothers and fathers to take two years of leave. But when 846 salaried workers were asked if they had ever attempted to take the time off, nearly 96 percent said that they could not. In the survey, conducted by the online job search site Scout from June 16 to 18, some said that they would face difficulty at work if they were to take leaves of absence. Others said that their companies had refused to let them go.

The shortage of public day care centers is also an issue. There were 33,499 child care centers nationwide as of December 2008, but only 1,826, or 5.5 percent, of them are public facilities, according to the Ministry for Health, Welfare and Family Affairs.

“It is true that Korea lacks reliable day care centers for children up to 2 years of age. Although there are many private day care centers, most are small and unorganized. Countries that have poor infrastructure for day care centers also usually have low birth rates,” said Lee Sam-sik, a researcher at the state-run Korea Institute for Health and Social Affairs.

Those who can’t rely on help from their mothers or mothers-in-law end up putting their names on a waiting list at a public day care center even before they give birth.

At a public day care center located in Dobong District, northern Seoul, there were 328 children on a waiting list as of July 2. Its capacity is 99.

Meanwhile, there are reports of violence, tainted food and even infant deaths at private day care centers, making parents reluctant to use these facilities.

“If my son could speak, I would send him to a day care center, but he just turned a year old and he can’t protect himself. That’s why I asked my mother-in-law to take care of him,” said Shin Eun-sil, 30, who has a 12-month-old son an drives 40 minutes to her mother-in-law’s home to drop her son off in the morning and 40 minutes back to pick him up in the afternoon.

Given the number of potential childcare problems that could arise, many grandmothers find that they can’t help but take responsibility for raising their grandchildren - whether they want to or not.

But as an increasing number of grandmothers take on parenting responsibilities, they also take on the corresponding difficulties, from physical ailments to a decrease in the amount of time they can devote to their own pursuits.

According to a recent news report, more women in their 50s and 60s are suffering from DeQuervain’s syndrome, or mother’s wrist, The syndrome affects the ligaments in the wrist and can require two weeks of rest or, in extreme cases, surgery. 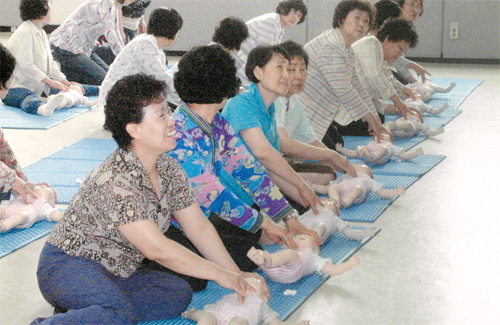 The condition used to plague mothers in their 20s and 30s who are in danger of overusing their hands to hold or nurse their babies. But a recent report by Jungdong Orthopedic Hospital, located in Sangdo-dong, Dongjak District, southern Seoul, said that two out of three women receiving treatment for mother’s wrist over the past year were women in their 50s and 60s.

To take care of her grandchild, Kim Shin-suk, 58, had to give up her dream of going to college.

“I have long dreamt of going to college. I was accepted to Korea National Open University in 1998, but when I started in the fall semester my granddaughter Eun-song was born,” Kim, who lives in Gyeongju, North Gyeongsang, recalled.

“My daughter and son-in-law were both college students back then. And my daughter was just 22 years old. I had no choice but to give up college and look after Eun-song.

Kim said most of her friends tried to persuade her not to take care of her granddaughter because she already had a busy life with college, volunteer work and singing in a church choir.

But Kim had a positive attitude about her new role as caregiver and stared taking classes to learn how to do it. She signed up for storytelling in English, basic English conversation and even essay writing.

Through this experience, she discovered that despite her age and the fact that she only knew the English alphabet, she could raise a grandchild who is fluent in English. Eun-song turned 11 years old this year and Kim is a best-selling author with a book about how she taught Eun-song English. She also gives as many as 12 presentations a month about her experiences.

“I believe a mother should help her children whenever they need it. My daughter was too young to sacrifice her college education and I thought she deserved to experience a bigger world,” said Kim, who was staying with her daughter, Hye-rim, in Pohang, North Gyeongsang, last month to take care of her third grandchild of less than two months old.

Kim Ji-hyang, a 30-year-old salaried worker, also turned to her mother after she gave birth to a baby in late February.

“My mother insisted that babies should be raised within the family [and not by others], so I never thought about getting a babysitter,” said Kim who goes all the way from Seoul to Daegu almost every week, a four-hour drive, to see her 5-month-old son.

“Korean parents think that taking care of their children, whether they are married or not, is one of their core responsibilities, which is a Confucian ideal,” said Cho Sung-nam, a sociology professor at Ewha Womans University.

“Korean society is family-oriented, so many grandmothers think that babies should be raised within the family,” said Lee Sam-sik, a researcher at Kihsa.

But not all mothers are happy about having grandma take care of the kids.

“I often get frustrated because my mother-in-law sticks to her own way of doing things,” said Choi Yu-jung, 35, a graphic designer who has two sons: one 5 years old and the other 15 months.

“For grandmothers, it’s a big deal when their grandchildren skip meals, so she gives my sons snacks, yogurt or sweets to fill their stomachs whenever they refuse to eat, but I don’t think that’s a good way to help my kids break away from bad eating habits,” Choi said.

But she says it’s hard for her to tell her mother-in-law what she wants because of the guilt she feels about needing her help. “If I didn’t need to worry about the enormous expense of hiring a babysitter, I’d hire one,” she said.

It costs between 1.5 million won ($1,176) and 2 million won to hire a babysitter, which for most salaried workers is equivalent to their monthly income.

Shin, who has a 12-month-old-son, faces a similar problem. She wants her son to eat three meals a day at the table, but her mother-in-law thinks it is okay for children to roam around while eating. She once considered hiring a babysitter but she gave up due to concerns about the safety of her baby and the expense.

While many working mothers struggle with child care, whether they get help from their parents or not, the central government has failed to come up with concrete solutions to help them. The Lee Myung-bak administration launched a nationwide campaign to increase the fertility rate earlier last month, but there are no action plans for mothers who have to get back to work after their three months of maternity leave.

“The ultimate solution for working mothers would be to build more public day care centers, but the whole situation is very difficult for so many reasons. I don’t know where to start to fix this deep-rooted child rearing problem. It just never ends,” said Lee Sam-sik, a researcher at the Kihsa.