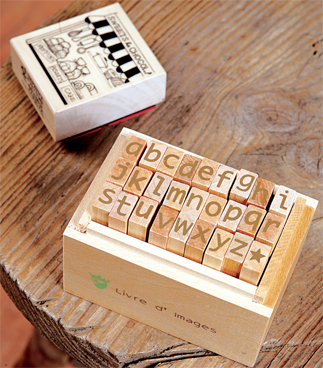 A traveler planning to visit Korea who looks online for a list of the country’s Top 10 Cities would find a city called “Busan” in second place and a city called “Pusan” in fifth on the Yahoo Travel Web site.

For people not familiar with Korea these may seem like two different cities but they actually refer to the same place: the city of Busan, located in the southeastern part of the peninsula, the nation’s second largest city.

Examples like the one above are common, with a Korean word spelled in English in many different ways and leading to confusion, misdirection or loss of information.

And with English likely to remain the global lingua franca for some time to come, the question of how to best transliterate Korean into English has become a matter of importance for Koreans striving to improve their ability to communicate with people from around the world.

“The Korean romanization system has been modified three times over the past six decades since 1948 when it was first officially formulated,” said Professor Song Ki-joong, a professor emeritus of Korean language at Seoul National University, who has been involved in numerous Korean romanization projects since 1983. “There have simply been too many changes.”

The romanization system last got an update in 2000, when the Korean government implemented use of the Revised Romanization of Korean.

Prior to that, romanization of Korean was primarily accomplished through the system created by scholars George McCune and Edwin Reischauer, albeit with two major adjustments in 1959 and 1984, when the Korean government adopted it as the country’s official romanization system. 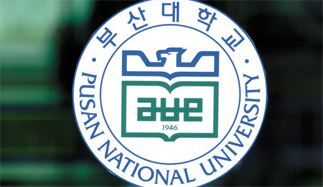 Pusan National University spells its name with a “P,” as shown in its logo.

The romanization issue recently flared again when the Presidential Council on National Competitiveness announced two weeks ago that it would change the system yet again in a bid to raise the Korean language’s international competitiveness.

Under the plan, a new romanization system would be introduced in 2011.

The announcement caused immediate controversy among scholars and the general public, mainly due to the fact that the latest revision was carried out only nine years ago.

“The current system is causing confusion because it is different from the McCune-Reischauer system used widely abroad,” the council said.

Kang Man-soo, the council chairman who is well known for his advocacy of the McCune-Reischauer system, said that the Revised Romanization system should be changed to reflect international standards and the preferences of foreigners.

In early 2000, when he was the vice finance minister, Kang had a heated argument about the government’s shift away from the M-R system with the National Institute of the Korean Language, which created the Revised Romanization system, through a series of columns.

Last year, when he was the head of the Ministry of Strategy and Finance, Kang, a major political figure with close ties to President Lee Myung-bak, was also reported to have made a personal request to Culture Minister Yu In-chon to consider revision of the romanization system.

“It is also problematic that discussion of a matter of such national importance would be put down according to the will of someone higher up,” Professor Song said.

Skeptics tend to argue that romanization should be a matter of consistency, rather than of efficiency.

“It’s not uncommon to find signs and Web sites that use old spellings [from the M-R system]. What’s confusing is not necessarily the current system, but rather that there are a couple in use, and there are a number of hybrids,” Brian Deutsch, an English teacher based in South Jeolla and a regular JoongAng Daily contributor, wrote in a recent column. “The fact that there are so many systems and hybrids in use shows that no single one is perfect and that a great deal of thought is needed before changing things yet again.”

But any changes to the system at this point will put a large economic burden on the nation. According to estimates by the presidential council, implementation of a new romanization system, which includes the cost of changing English names on official documents and signboards around the country, would cost 300 billion won ($235 million).

The idea that the government should take its time before moving forward with its romanization plans may be, in part, a response to the government’s previous attempt to change the system. 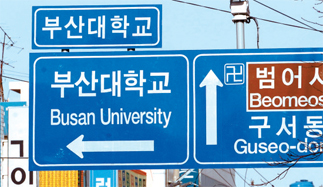 But the Busan city government spells its name with a “B” on city signs, causing confusion about the university’s name. [JoongAng Ilbo]

Youe Mahn-gunn, a professor emeritus at Sungkyunkwan University who chaired a subcommittee of six scholars established by the National Institute of the Korean Language charged with devising a new system, acknowledged in a 2005 interview with a local broadcaster that the decision to change the M-R system and the process of developing Revised Romanization was done quickly in anticipation of the number of foreign visitors set to arrive for the 2002 World Cup.

Professor Song at SNU, who had initially been part of the subcommittee, which was set up by the Culture Ministry in 1997, said he was one of the people on the committee who was strongly opposed to the introduction of a new system. 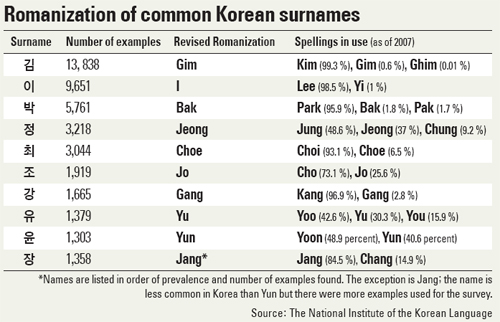 “What we need is not to create a new system but stick to a single system once it is set. I think it is problematic for the government to change the system every now and again,” he added.

“Given that it is impossible to perfectly transliterate Korean into English or another language, who can guarantee that the government will not come up with a new method again, say, after 10 years, that it claims is even more efficient?”

The necessity of staying with a single system once it is established seems evident, considering the confusion that already exists.

The national university in Busan, for example, uses “Pusan” in its name, Pusan National University, a vestige of the pre-2000 M-R system.

When Revised Romanization was adopted in 2000, the school was pressured by the city government to follow the new system and use “Busan” instead.

But the university, which had already earned global recognition, was reluctant to change its name.

“We didn’t even think about changing our English name, despite the adoption of the new romanization system in 2000, because our name was already recognized internationally,” said Kim Hyung-jin, a public relations officer at the university. “We’ve been using this name at home and abroad for the past 18 years, since 1984, and thought it would cause confusion if we changed the name.

“But the signs the Busan city government has posted around the city say ‘Busan University,’ which has perpetuated the confusion about the name, particularly among foreigners.”

The Pusan International Film Festival, which is the country’s largest film festival, faced a similar situation.

“There was a news report last year that said we would change the abbreviation of our English name from the current PIFF to BIFF starting in 2011. But that was the city government’s suggestion, and was not initiated by us,” Mun Hyeon-jeong, a PIFF public relations official, said. “We are not currently considering such a plan because we, as an international event organizer, need to be consistent with our name, which has been in use for more than 10 years already.”

The romanization of people’s names is another potentially contentious issue. The Presidential Council said that it is considering a plan to devise a new romanization system for transliterating Korean family names into English, which was not included when RR was adopted in 2000.

The National Institute of the Korean Language conducted a survey in 2007 to find out how Koreans were writing their names in their passports. It revealed that more than 95 percent of people with the names “Kim,” “Lee” and “Park” spelled their names according to the M-R system, instead of as “Gim,” “I” and “Bak,” as would be required using Revised Romanization.

Given that 21.59 percent of Korean people have the name “Kim,” 14.78 percent have the name “Lee” and 8.4 percent, the name “Park,” it will not be easy to make such a large number of people change the English spelling of their names, no matter what system is used.

“I think it is absurd for the government to tell how people should write their names, which is a totally private matter. The rule might be necessary as a sort of guideline for people transliterating their names into English for the first time and for some official purposes, but forcing people to follow the rule is not realistic,” Brother Anthony, a professor emeritus of English at Sogang University, said.