Naked News is no worse than other sites

Naked News is no worse than other sites 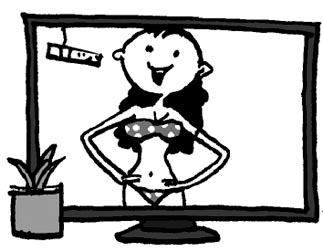 There is a strange custom in Japan called nyotaimori. It refers to eating sashimi or sushi off of a naked woman’s body. Apparently it is quite the rage in the United States and Europe, too, what with the growing popularity of Japanese food in the West.

Does sushi taste better if it is placed on a woman’s body? They say there’s a link between sight and taste. But I seriously doubt anyone does it for the taste.

Along these lines, Naked News has become a hot topic here, as it officially launched in Korea this week. The Internet news Web site started in Canada in 1999 with the idea that a naked woman should read the news. The site’s advertising slogan, “Nothing to hide,” was an incredible hit, and Naked News is said to currently have close to 10 million paying users around the world.

Of course, discussing the quality of Naked News is similar to discussing the taste of nyotaimori sushi. Both are nothing more than excuses to see naked women.

The Korea Communications Commission said it would monitor the lewdness of the Internet news broadcast. But I don’t think it is time to suddenly talk about lewdness regarding an adult pay service.

If it must be criticized, the real problem with the “news that is not news” site revolves around the fact that it does not have a single reporter and does not directly investigate any issues, yet it claims to be a news service.

It blatantly ignores the reality that where you get your news from - in other words, which station, newspaper, reporter, etc. is behind it - makes a world of difference as to the credibility and usefulness of the content. The site seems to be saying that news is just one element of a whole package.

Looking around, it becomes clear that this is not just a problem for Naked News. There are already many media organizations that produce “news” without a reporter.

According to the July edition of “Newspapers and Broadcasting,” there were 1,399 Internet newspapers in Korea as of March 2009. Half of them are newspapers only in name, while 706 actually produce articles.

It is dubious as to whether most of them have real reporting resources. Innumerable newspapers “copy and paste” from other journalists’ works and produce articles without bylines. The copyright of an article is totally ignored in this process.

How can anyone criticize Naked News as “only having the appearance of news” when such “cyber” quasi-newspapers are alive and well?