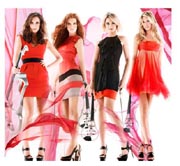 Escala’s position as an all-girl electronic string quartet is rather sticky, sitting as they are on the border of pop and classical music. The pop scene says they’re too classical, while the classical scene shuns them for being, well, not classical enough.

But in spite of that, the London-based quartet has certainly steamed up the classical scene with their sultry looks and spicy tracks. The group, which rose to fame after participating in Britain’s Got Talent in 2008, consists of viola player Chantal Leverton, 26, cellist Tasya Hodges, 26, and violinists Victoria Lyon, 25, and Izzy Johnston, 25.

Their recently released self-titled debut album has created a stir and brought a bit of sexy to the classical music world. Here are some excerpts from an e-mail interview with Escala member Tasya Hodges.

Q. Where would you say classical electronic music stands in the music circuit?

Crossover classical hadn’t appeared on the pop charts, but our single made it to #2 on the pop charts in the United Kingdom. I think that’s because we were on TV, we got good exposure, and more people got to experience the music. So, yes, I think classical music can be mainstream.

While your musical talent is obvious, your shows and the images of you seem to highlight your looks and fashion sense. Do you ever worry that perhaps the image will overshadow the music, or work against what’s expected of classical musicians?

People expect things, and classical musicians are expected to dress neatly. So, some might think that musicians who wear cool dresses are not that good. But we enjoy playing music, and we enjoy wearing cool dresses. It’s a part of who we are. The looks come with the music.

How is your group different from other electronic classical music groups?

We are similar in terms of what we play, but there are differences. Our music is not as electronic, we’re more orchestral. Everything is recorded acoustically at first. And we like to put on shows, so all of our music is choreographed. That’s the biggest difference.