An old house for a new neighbor

An old house for a new neighbor 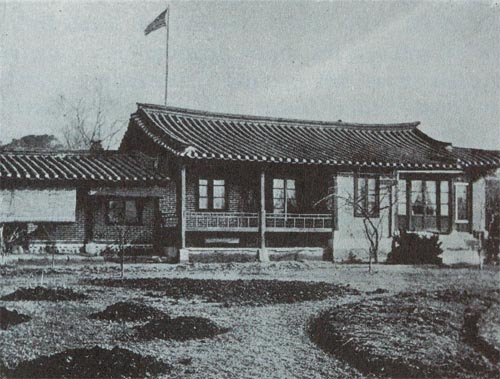 Being a traditional Korean house, the old American legation was more or less a discomfort for most of the American diplomats living there, records show. Despite numerous attempts to rebuild the legation in a Western style, this building somehow survived. Provided by Myongji University-LG Yeonam Library

The United States was the first Western country to establish an official relationship with Korea.

It’s no surprise, then, that the old American legation building was the site of some important firsts.

In May 1882, Korea and the United States signed a treaty of commerce in Chemulpo Port (today’s Incheon Port).

In the following year, Lucius Foote came to Korea as the first resident representative of the U.S. to Korea.

According to embassy documents, in August 1884 Foote purchased two houses from two members of the Min family, Gye-hyo and Yeong-gyo.

The Mins were a powerful, aristocratic family from early Joseon that grew even more powerful when Queen Min (1851-1895), also known as Empress Myeongseong, ascended to the throne through her marriage to Gojong in 1866. A large portion of the land in the Jeong-dong area subsequently came into the possession of the Min family, historians say.

“It wasn’t until October 1884 that foreigners were allowed to own property in Korea,” says Kim Jeong-dong, architectural history professor of Mokwon University. “So technically this [Foote’s purchase] was illegal.”

Illegal it may have been, but a certificate issued by Hanseongbu, or the Mayor’s Office in Seoul, four years later further sealed the deal, stating that the properties were “forever sold” as the “premises for the Office of the U.S. Legation.”

With that, the houses had become the first properties in Korea sold to a foreigner.

The occasion was equally significant for the Americans. The legation is one of the oldest U.S. embassies in the world.

While other foreign governments constructed their legations themselves, the U.S. government was the only one to use an existing building, in this case a hanok, or traditional Korean house. 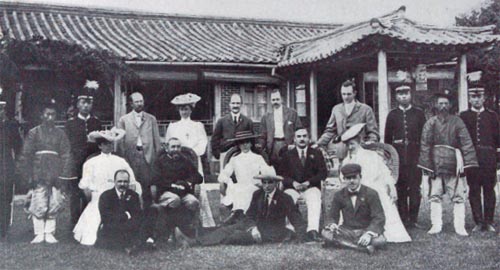 A U.S. party led by Alice Roosevelt visited the American legation in September 1905.

It is unknown, as of yet, when the original properties owned by the Mins were built, so it is impossible to estimate how old the American legation is, although some say that it looks to be about 300 years old.

Some historians argue that the decision to use the hanok as the site of the legation reflects that Korea wasn’t a country of great importance to the U.S. at the time.

“When the U.S. first dispatched Foote in 1883, his title was Envoy Extraordinary and Minister Plenipotentiary. But in July 1884, the U.S. demoted him to the position of Minister Resident, citing low bilateral trade volume and thus a low diplomatic grade,” says Son Jeong-suk, professor of history at Ewha Womans University. “The U.S. continued to send minister resident-level diplomats for the next 17 years.”

Son further supports her argument by saying that most of the American diplomats who came here had little experience as diplomats or knowledge about East Asia or Korea.

“Of the seven official American ministers who were dispatched to Korea, only three - Foote, [Horace N.] Allen and [Edwin V.] Morgan - had previous experience as diplomats,” Son wrote in the book “The Foreign Legations in Korea during the Open-Ports Period.”

“And only two - Allen and Morgan - had previous knowledge of the Korean Peninsula,” Son wrote. 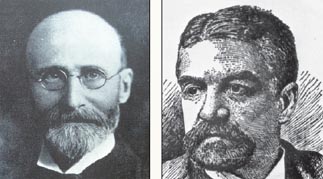 Lucius Foote was the first resident American diplomat in Korea. He purchased the land for the American legation compound in 1884. 4. Horace Newton Allen (1858-1932), an American diplomat and a Protestant medical missionary, also lived in the legation building. There is a record of how he complained to Washington about the building’s low ceilings.[JoongAng Ilbo]

According to Son and other experts, U.S. diplomats in Korea made repeated requests to Washington for construction of a new American Legation, but to no avail.

“It is common for embassies to build facilities in a style reflecting national customs and manners,” says Ahn Chang-mo, a professor of architectural history at Kyonggi University. “That’s not only because the staff want to work in an environment they feel most familiar with, but also because the embassy’s appearance is the face of the country.”

The main photo above is taken from a book on Korean American relations called “God, Mammon and the Japanese,” written in 1961 by Fred Harvey Harrington (1912- 1995), a respected American historian and former president of the University of Wisconsin.

The caption is interesting and insightful, reading like this: “This sorry little Korean house was the despair of every American diplomat assigned to Seoul. Uncomfortable and unpretentious, it is inevitably suggested to the Koreans that the United States could with impunity be ignored.”

The low ceilings (low by Western standards, that is) were just one source of diplomats’ complaints.

Horace Newton Allen (1858-1932), an American diplomat and a Protestant medical missionary, was over 183 centimeters (6 feet) tall. He made a request to Washington for alterations to the building, saying that he could not stand up with his hat on. The reply he got from Washington was not to wear a hat in the house.

At one point, the old American legation was also used as hotel.

“In the early days before the railways, there was no proper hotel in Seoul and guests would usually bring some sort of introductory letter and secure entertainment at the legation of their country. A guidebook published in Europe had an entry under the heading for hotels in Seoul - ‘Guest House, American Legation,’” wrote Lillias H. Underwood (1851-1921) in her 1904 book “Fifteen Years Among The Top-knots.”

Underwood, a missionary herself, was the wife of respected missionary and educator Horace Grant Underwood (1859-1916).

The legation’s traditional Korean architecture was a surefire topic of conversation for visitors at the time.

“The native architecture was preserved as far as was possible to the intense delight of visitors of an artistic temperament, who never fail to lavish praise on the effect of the beamed and raftered ceilings fully exposed, with neat white paper between the rafters,” Allen wrote in his book “Things Korean” (1908).

Since Minister Foote set foot in the building, the old American legation has experienced numerous alterations and extensions, large and small, to better accommodate its residents and later, history.

During the Japanese colonial period (1910-1945), the compound was used by the Japanese. The Americans came back after the Korean War (1950-1953), but the unsafe conditions at the old legation led them to build and move to a new place, Habib House, in 1976. 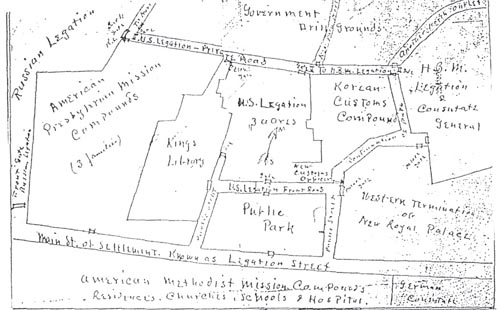 This map was presumed to have been made by Horace Newton Allen and is known to be one of the earliest maps of the Jeong-dong area. The street is marked “Legation Street,” and shows the cluster of foreign legations in the area. Provided by Samseung Architects

In 2000, the U.S. government asked a group of Korean architects to restore the old American legation.

“The U.S. government was aware of the value of the building and wanted to find out more about it before launching the restoration,” recalled Chang Soon-yong, the president of Samseung Architects and the president of the Korean Academy of Architectural History.

Chang said that the U.S. government requested that the architects maintain as much of the building’s original form as possible, but also asked them to refurbish the inside so that it was more befitting of a guest house.

“One of the major challenges was the decayed wood. We replaced the interior wood with sturdy, new pieces, but tried to leave as much of the exterior wood as possible,” Chang said.

In 2000, the Seoul city government designated the old American legation as the city’s Tangible Cultural Property No. 71.

Area of virtue in the center of the old city

Anyone with experience in a foreign land knows the importance of ethnic enclaves. In the Koreatowns, Chinatowns and Little Italys of the world, people from these countries can always find some degree of comfort in a place where the language, signs and food provide a piece of home and a little peace of mind.

Jeong-dong in central Seoul (previously spelled Chong-dong) was where the American, British, German, Russian, Italian and French governments set up diplomatic missions in the late 19th century. Accordingly, it was where missionaries, another major group of foreigners in the area at the time, built homes, schools, hospitals and hotels.

Foreign accounts of 19th-century Korea indicate that by 1890, there were about 80 Westerners calling Jeong-dong home. This is noteworthy given the fact that before 1884 the Korean government had banned all foreign settlements within the city walls. It was even more incredible considering Jeong-dong’s proximity to Deoksu Palace, the king’s home and the seat of government. After all, the only thing separating the foreign settlement from the royal residence was a wall.

Most historians agree that the decision to allow the settlements reflects the intentions of Gojong (1852-1919), the 26th king of Joseon Dynasty (1392-1910) and the first emperor of the Korean Empire (1897-1910), to forge ties with Western powers and secure some measure of protection from the threat of Japanese invasion.

For the foreign governments, the proximity to the main palace, and the Mapo ferry point, was not a bad deal.

Jeong-dong surfaces in Korean history in 1398 as the place where Taejo (1335-1408), the first king of the Joseon Dynasty, buried Queen Sindeok, one of his wives. The burial created a stir because tombs were not permitted within the city walls. After the tomb was installed, the area was called Jeongneung, translated as “tomb of virtue.” The word jeong, or virtue, was given to highly respected queens. Sometime after that, the area got the name Jeong-dong, or area of virtue.

For the next several installments of the Old Seoul series, we will explore Jeong-dong and its history.