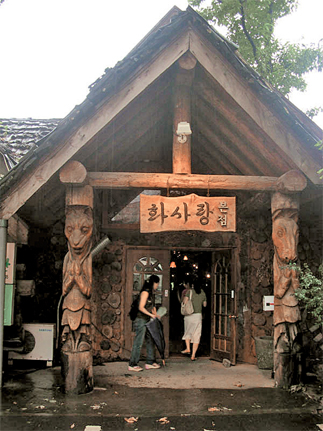 Whasarang, a tavern housed in a cabin, is the oldest establishment in Anygol. Provided by Whasarang

Anygol almost didn’t make it. But the urban development project that saw most of the city destroyed in the early 1990s could not keep the village of Anygol down. It is now a bustling community and budding tourist attraction with 70 restaurants, live music cafes, bars and shops clustered tightly together. On weekends, the area fills with families and couples who go there to dine and enjoy life outside the city.

Elderly villagers say that Anygol, located in Ilsan District, Goyang, was once called Aehyeon Goeul (“goeul” means village) but that the name somehow got shortened to its current form. The name is just one indicator of the history hidden here.

In 1979, Kim Won-gap, a graduate of Hongik University’s visual art program, opened a studio right in front of Baekma Station. The place eventually became a favorite hangout for his friends and classmates. Kim and his wife treated their visitors to simple fare that included pajeon (green onion pancakes) and makgeolli (traditional rice wine) and musicians would play classic folk songs. People kept coming back for more.

Later, the couple turned the studio into a tavern called Whasarang. The “Wha” comes from the Chinese word for painting and “sarang” is the Korean word for love.

Word spread and it wasn’t long before the college students that filled the Sinchon area of Mapo District, Seoul, were lured away from the city’s smoky, overcrowded bars and to the intimate interior of Whasarang.
“There were few cafes and restaurants in the country then, and people went to old-fashioned cafes or bakeries for a date,” said Park Sang-mi, Kim’s wife and the co-owner of Whasarang. “The countryside atmosphere at Whasarang was what enticed people to come.”

As time went by, dozens of restaurants and live music cafes and bars opened their doors in Anygol. The village became a favorite getaway for students burdened by studying and parental pressures.

The development of Ilsan District, just one train stop away, in 1991 almost destroyed Anygol completely. Most of the restaurants that once filled the streets were forced to close their doors forever, but Whasarang reopened nearby later the same year. The location may have changed, but little else at Whasarang has. The 1980s atmosphere is still evident in the tables, chairs, lanterns and walls, all made of wood.

In late 1996 and 1997, other restaurants again followed Whasarang’s lead and opened shop in the area, leading to a revival. The many cafes and restaurants there now serve Korean, Japanese and even Italian food.

What distinguishes the new Anygol from the old is that most of the patrons are not students but families. And they come from all over. Some travel from as far away as Incheon and Uijeongbu, others are neighborhood regulars who just have to walk down the street to find their favorite spot.

Here are some recommended stops for a visit to Anygol. For more, go to www.anygol.com.


Whasarang still plays folk songs from the 1980s. The lanterns made of thin tree branches are spectacular.

Lavenheim is a fancy Italian restaurant with a terrace. The interior is decorated with flowers and miscellaneous goods such as silver and porcelain, which are available for sale. The restaurant serves tenderloin steak (32,000 won) and a full course meal that includes steak, soup and dessert (78,000 won). Call (031) 901-2353 or go to www.lavenheim.com. 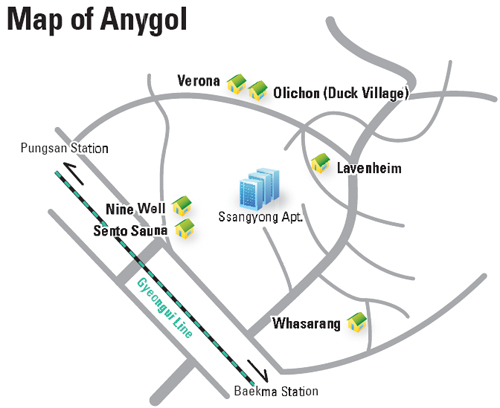 Sento is a sauna with outdoor spa. It opened in December and is clean and modern. The mogyoktang (bathhouse) is gender-segregated but the jjimjilbang (sauna) is unisex. There is also an outdoor spa and rooftop lounge. Admission is 10,000 won. Call (031) 907-0189.

·Flight, farming and cool quiet for an old legend


New life for the Gyeongui line