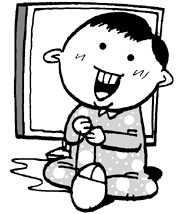 A man living in 1996 is approached by a woman from the future. He is excited when she proposes they engage in casual sex, but is less thrilled when she pulls out a headset and remote control. The man suggests they make love the old-fashioned way, only to be rebuffed by the woman for wanting to engage in an out-of-date and unhygienic activity.

The scene from the 1993 film Demolition Man offered a glimpse of a dystopian, futuristic society.

Today, e-mail has long replaced handwritten letters, and playing video games at home saves one from unnecessary outdoor activity. In such a climate, virtual sex may not be a fiction of a far-fetched, faraway future after all.

Teens these days hang out on MySpace or Facebook rather than in homes and at playgrounds. The intimacy of physical contact is no longer a necessity for socializing, especially among the young generation born into the digital age, for whom a computer mouse was one of the first toys they played with.

Today s youths are digital natives, according to American education scholar Marc Prensky, while older generations are digital immigrants. Kids today naturally belong to the indigenous culture of technology. But the older generation has moved to a new, unfamiliar land where they must make an effort to adapt and assimilate to the digital world. But no matter how much they try, new technology will always be their second language.

The thick accent of their old analog tongue will never be completely lost.

Eric Schmidt, the chief executive of Google, spelled out the generation gap in his commencement address at Carnegie Mellon University, in Pennsylvania.

We got our news from newspapers, you get yours from blogs and tweets. ... We just didn t tell anyone about most embarrassing moments, but you record them and post them to Facebook and YouTube every day.

But offering a word of wisdom from someone who has seen both worlds, Schmidt advised college graduates to turn off computers and cell phones.

You need to actually look at the people who are near you and around you, and decide that it is humans who ultimately are the most important thing to us.

The motivations of life curiosity, passion, enthusiasm and solutions to life s challenges exist in the real world, not the cyber world.

The logic may sound ironic coming from someone who made us depend on Google more than our own minds for information, but we should take heed of Schmidt s warning against overreliance on digital technology.

The past ways of life memorizing phone numbers and jotting things down with pen and paper may in fact be the best firewall protection we have from random cyber attacks nowadays.