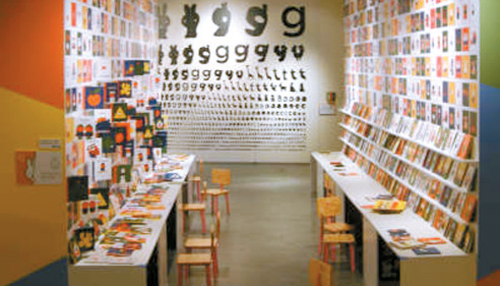 A collection of Dick Bruna s Miffy books. Each book uses just six colors to illustrate whimsical characters that have enthralled children worldwide for more than 50 years. By Hannah Kim

The magical world of Miffy, the lovable fictional bunny cherished by children for more than five decades, has hopped to life in the Hangaram Design Museum at the Seoul Arts Center.

Under the title Miffy at the Museum Dick Bruna Exhibition, the entire art gallery has been transformed into a fantasy wonderland, complete with interactive artwork, play areas, puppet shows and even Miffy and her friends milling about. 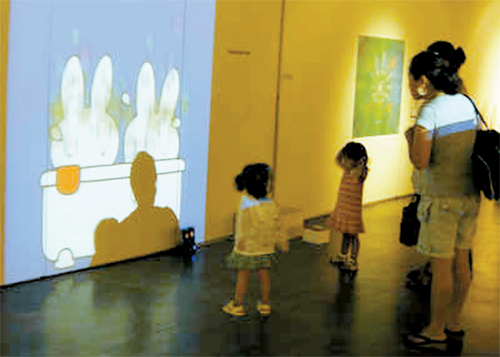 In this digital piece by a contributing artist, voice sensors trigger the release of digital bubbles when Miffy s name is called.

Dutchman Dick Bruna created Miffy in the 1950s and has since published countless children s books featuring the character and her pals.

Although Bruna can t make it to Korea for the exhibition because of health issues, he contributed to it immensely, said Lee Sang-eun, manager of art design for the Hangaram Design Museum .

He made sure that each picture frame and piece of artwork was at the eye level of children so they would not have any difficulty viewing them, Lee said.

Bruna, inspired by the simplicity of the artist Henry Matisse s paintings, wanted to create a character that was simple and would not intimidate children with overly flashy colors or decorations. All of the Miffy books, therefore, use only six colors: red, yellow, blue, brown, black and gray. Each book also is only 12 pages long and comes in a compact size that children can easily handle.

Though the drawings may look simplistic, Bruna usually completes hundreds of sketches before giving the final go-ahead.


Born into a family that owns a publishing company, Bruna was brought up in an environment that naturally encouraged reading, leading to his career as an illustrator.

This progression is depicted in the first part of the exhibition, called Dick Bruna s House. It s a real treat for art enthusiasts, displaying Bruna s artwork and illustrations from the 1950s.

The collection totals 2,000 pieces and 130 Miffy books. Here, you can revisit familiar Bruna works such as Shadow, where the character is depicted in silhouette.

The next part of the exhibition is called Miffy the Artist, which features interpretations of the friendly rabbit by 15 artists from Korea and other parts of the world. Many of the pieces are in digital format and include interactive elements. A piece called Miffy s Birthday, for instance, has digital sensors that can identify stuffed toys. Children can match up the toys to what Miffy anticipates receiving for her birthday. Another piece called Miffy, Why Are You Crying? gives children a chance to direct the bunny across the screen by clapping their hands. The goal is to help Miffy find her lost stuffed bear.

Because the whole exhibition has so many interesting activities, whenever people ask me to describe it, I simply tell them to experience it for themselves or they ll never know, Lee said.

Children and their families can participate in many exhibits, and there s also a playground, a ball pit and a drawing station.

I wasn t counting on having much fun at this exhibition, Ahn Kyeong-ju said last Thursday while guiding her son through the exhibit. But there are things to do left and right, which my son really is enjoying.

One of the most interesting features is the Miffy Plus 100 exhibit, which consists of 100 Miffy dolls designed by celebrities and companies including Bong Joon-ho who directed the Korean blockbuster Mother the luxury jewelry brand Swarovski and Hans Heinsbroek, the Netherlands ambassador to Korea.

Visitors can also visit the Miffy Play area, where hand puppets relate the rabbit s story at designated hours throughout the day.

Additionally, the exhibit gives parents and children alike the opportunity to learn about Bruna s artwork and participate in various workshops, where participants can make everything from cookies and cups to badges and more.

It is not just your regular, run-of-the-mill exhibition, Lee emphasizes. Since Miffy is a character that has been loved for over 50 years, this exhibit can be enjoyed regardless of age or generation, from grandmother to grandson.