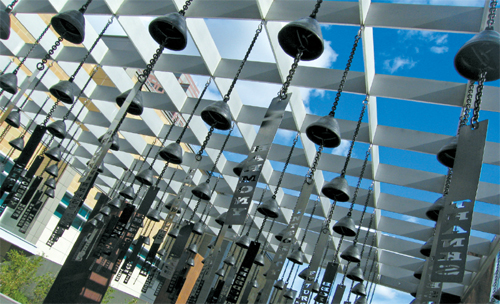 When the wind blows, the soft sound of ringing bells fills the air in downtown Los Angeles, casting a sense of calm over the din of the city.

The bells are part of an installation titled Wishing Bells/To Protect and To Serve, located in a public plaza in front of the entrance to the new Metropolitan Detention Center. 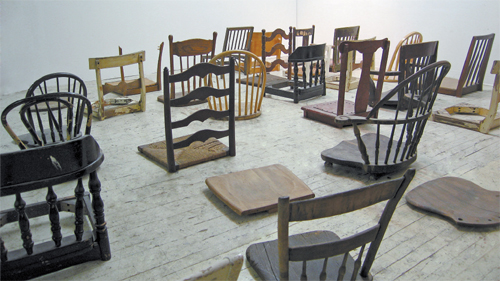 Chairs (2009). The 70 wooden chairs in this piece have been collected by the artist over the last 10 years.

The installation is the work of Sook Jin Jo, 49, a New York-based Korean artist. Occupying the space between the Little Tokyo Historic District and the district that houses City Hall, the Federal Building and the Parker Center, the headquarters of the Los Angeles Police Department, Jo s work is both spiritual and purposeful. 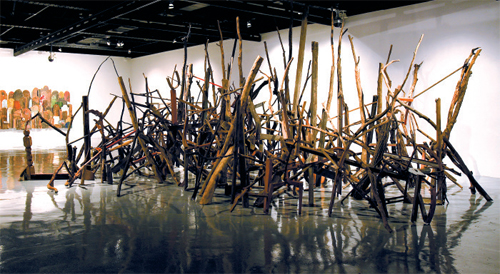 To the Unknown God (2007), Arko Art Center, Seoul. The pieces of wood in this work were collected by the artist.

In 2004, Jo was chosen by the LA Department of Cultural Affairs to produce an artwork for the new detention center, which was built to replace the aged Parker Center jail and is slated to open later this year. 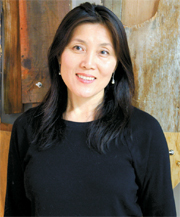 Artist Sook Jin Jo has a fondness for working with wood, which she says represents life.

The creation of the new detention center was highly controversial from the start, with people saying that it encroaches upon nearby Little Tokyo, which has long been a cultural and religious center for Japanese-Americans. The area is home to the Nishi Hongwanji Buddhist temple and the Japanese American National Museum and was designated a National Historic Landmark District in 1995.

The addition of Jo s installation, however, has restored balance to the community.

The installation is part of a larger initiative to put art in public places following the passage of a bond in 2002 requiring construction projects to devote 1 percent of their budgets to art.

Sook Jin s idea was to give family members, visitors, staff and people detained at the jail a sense of hope and rejuvenation, says Pauline Kamiyama, a former public art manager at the LA Department of Cultural Affairs who was involved in the artist selection process.

Jo said her involvement in the project was more than a coincidence. She went on a retreat five days before she got the call from the LA Department of Cultural Affairs inviting her to submit a proposal for the project.

While she was away, she decided that she wanted to focus her energies on helping the underprivileged, and even had the idea that she would like to work with people who were incarcerated, she told the JoongAng Daily in a recent interview, a telling sign of her future project. She was in Korea for the opening of a new exhibition at the Seoul National University Museum of Art.

The work consists of a metal grid supported by four 3.9-meter (13-foot) cedar columns, which are themselves surrounded by five more cedar columns. Suspended from the grid are the 108 bells, all of different weights and thicknesses, which allows them to produce different tones.

The nine columns represent the board of five police commissioners and the four star insignia of the chief of police.

Wishing Bells is situated on the open plaza in front of the detention center. People can walk among the columns and listen to the gentle sound of the bells when the wind blows. Hanging from the bells are small pieces of metal engraved with text contributed by members of the community, including the LAPD and Little Tokyo. Words such as integrity, dignity, openness, peace, forgiveness, reverence, responsibility and honor send out messages of hope as the bells chime.

The surface of the plaza is designed in a pattern suggestive of waves and is reminiscent of a Japanese Zen garden.

Jo said the 108 bells are representative of Buddhist philosophy. When I visited Japan, I went to see an old building, where I saw and heard several small bells ringing, Jo said. It made a deep impression on me.

When the New Year starts at midnight, the bells in Buddhist temples throughout Japan are rung 108 times to announce the passing of the old year and the coming of the new, Jo said. Each toll of the bell dispels one desire that may be a cause of suffering.

The effect, she says, is meant to be the same for the prisoners held in the detention center.

She gives Metro Detention Center spiritual resonance by installing what is in effect a monumental Zen garden. She softens its image without diminishing its sense of purpose to protect and to serve, which is the motto of the LAPD, American art critic Donald Kuspit wrote in a 2004 essay about her work.

Like most of Jo s works, Wishing Bells is notable for its use of wood. In fact, the nine columns are made of 500- to 800-year-old cedars.

Jo says that for her, wood represents life.

She began incorporating pieces of wood into her work when she was studying art at Hongik University, though finance played a larger role than philosophy at that point.

As time went by, she found that wood was not only cheap but also very useful, and began experimenting with it in her paintings and sculptures.

Most of the wood is found, collected from the river or the streets of her New York neighborhood.

There are no two branches that look alike, which I think is amazing, Jo said. The way each one stretches out is different from another.

After getting her master of fine arts from Hongik University, Jo had her first solo exhibition at the Kwan Hoon Gallery in 1985.

She later moved to New York and received another M.F.A. from the Pratt Institute in 1991.

Her breakthrough came in 1990 with her first solo exhibition in the U.S. at OK Harris Works of Art in New York City. Later that year, she appeared in Art Today, a documentary featuring 13 prominent artists including Jenny Holzer, Ilya Kavakov, Cindy Sherman and Cy Twombly.

Jo has been a featured artist in various publications, including Art in America, ARTnews, Sculpture, The New York Times and Art Today. In 2004, she participated in the Lodz Biennale, Poland, and the Gwangju Biennale.

Jo is currently part of a group show at the Seoul National University Museum of Art. The exhibition presents the works of 11 artists who received awards from the Korea Arts Foundation of America, which supports Korean American artists active in the United States.

The work, aptly titled Chairs, consists of a group of 70 wooden chairs, each with its legs sawed off. The chairs are pieces Jo has been collecting for the last 10 years, some are scavenged curbside finds and others have been given to her by friends or strangers.

Speaking about the work, Jo said, These days, I am working on collecting bits and pieces of my memories. I wanted to create a piece that would evoke a sense of reflection.

The piece invites visitors to contemplate the lives of people we can only know in our imagination, David Pagel, an art critic for the LA Times, wrote about the work.

These simple gestures pay homage to what has been lost and what may never be known as they give visitors ample opportunity to recall some of the times and the places and the people we hold in our own memories, Pagel wrote.