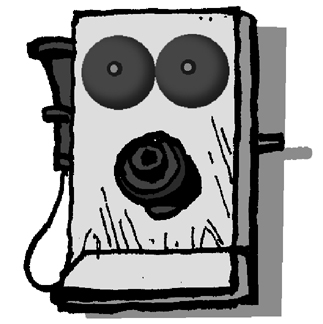 It was 1896 when the first telephone was set up in Korea. Three phones for Emperor Gojong were installed at Deoksu Palace. One line to Pyongyang, one to Incheon and another to the government ministries. When the emperor made a call, officials adjusted their clothes, bowed four times, then kneeled down before answering the phone and beginning the conversation.

In Yeom Sang-seop s story, The Telephone, the mysterious equipment was described as a square-shaped wooden box with two metal bells the color of white brass on top.

A telephone was called deoknyulpung in Korean at that time. The word is made of Chinese characters and it is pronounced as delufeng in Chinese. It seems that Chinese took the phonetics of the English word telephone for its own word for the device.

Kim Gu is probably one of those who benefited most from the first telephones. He was deeply enraged by the Japanese assassination of Empress Myeongseong, and the 21-year-old man was charged with manslaughter of a Japanese officer and imprisoned in Incheon. Emperor Gojong happened to hear about his story by chance, called the prison and ordered his sentence be reduced. This was three days after a telephone was installed in the prison. If the phone lines had been installed a little bit later, Kim could have been executed.

After Emperor Gojong died in 1919, a deoknyulpung line was set up between Changdeok Palace where Emperor Sunjong used to stay and Hongneung, Emperor Gojong s grave. It was intended to make it easier for the new emperor to pay his respects to the deceased emperor, as he was supposed to do for three years. When Sunjong mourned and cried through the deoknyulpung each morning, a grave guard put the receiver in front of the grave. It s the equivalent of the present-day custom of visiting graves of ancestors through videophones or conducting memorial ceremonies for ancestors over the Internet.

The telephones that Emperor Gojong used manned by an operator with 100 lines at his disposal were the products of Ericsson. The Swedish company was established in 1876 and it was already a global company at the time when the Korean emperor first got connected. The company went beyond its small domestic market, spread across Europe and sold telephones and operators in even South America and China.

The Blue House has recently said that Ericsson will establish a research and development institute in Korea with a staff of around 1,000. According to the government s estimate, the investment could be worth as much as 2 trillion won ($1.5 billion).

There must be various reasons why the company might choose Korea for the location, and perhaps the company highly appreciates Korea s technology and IT infrastructure. It also means that Korea is emerging as one of the leading countries in the global IT industry.

Could Emperor Gojong have imagined that this day would come when he was stunned to see the deoknyulpung 100 years ago? Perhaps we can allow ourselves to feel proud of our achievements over the past century, so long as we don t fall into complacency.