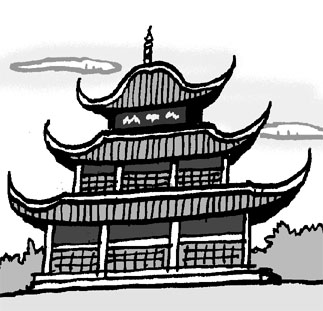 Fan Zhongyang was a politician from Northern Sung, in China, and one of the reformists of that time. His father died when he was young and his mother quickly remarried. Fan left home and went through all types of difficulties to receive an education at a temple.

As he was extremely poor, Fan made porridge, cooled it down, then divided the cold lumps into four portions. He ate two portions a day.

Fan Zhongyang is the main figure of the Chinese anecdote titled “Dividing Porridge.”

Despite his hardships, he studied hard and eventually passed a national exam and was hired as a civil servant. But he did not use his title or power to pursue his own glory. He always considered things from other people’s points of view, constantly conducted reforms and received respect from inside the court and from ordinary people.

Later, he was dragged into a political struggle and demoted to a lower-ranking position outside the capital. Then one day, Fan received a letter from a friend. His friend wrote that the Yueyang Tower, a building with a stunning view by the Yangtze River, was being renovated and asked him to write notes on the famous building.

He wrote “Yueyang Lou Ji,” or “Notes on the Yueyang Tower,” which is now regarded as one of the classics.

The writing is about the integrity of officials. Looking at the painting of the tower and its surroundings, he praised the remarkable scenery. But at the end he wrote his thoughts and philosophy on how a person must serve as a civil servant.

He also raised the pertinent question, “Then, when can a civil officer feel happy?”

He finishes by writing, “One must be worried before other people are, and one must feel joy only after all the people in the world feel happy.”

When one is indulged in a lavish lifestyle it is hard to find a way out.

In our country these days, some high-ranking government officials purchase luxury apartments and designer goods before others do. They wish to own luxury cars, preferably more expensive ones than their neighbors’ vehicles.

This was confirmed when looking at a recent hearing at the National Assembly.

If those who indulge themselves in extravagance and only concern themselves with the competition to accumulate wealth are hired as high-ranking government officials, will they wield their power in a righteous way?

The morals and ethics of high-ranking officials must thus be thoroughly checked and re-evaluated.