Cruise out to a cool campsite for a great outdoor adventure

Cruise out to a cool campsite for a great outdoor adventure 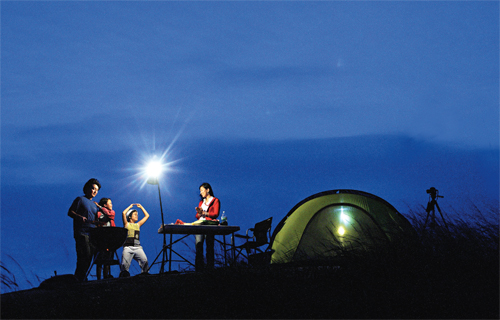 A family enjoys some together time while camping under the stars. [JoongAng Ilbo]

Did you ever go camping when you were young?

Watching shooting stars flying across the sky, lying in the dark listening to the crickets sing, roasting marshmallows by the fire - these are just a few of the joys you may remember about camping out in the wilderness.

But if camping provides a chance to get back to nature, breathe in some clean air and spend quality time with people you care about, it is also an opportunity to live without the conveniences of modern life.

After all, how long has it been since you’ve unplugged your television, Internet or cell phone?

Whether you are going away with friends, family, classmates or co-workers camping can be a memorable experience. But it can also be a hassle. Buying and loading up the gear, locating a good campsite and finding potable water and clean restrooms are just some of the potential problems you might encounter. 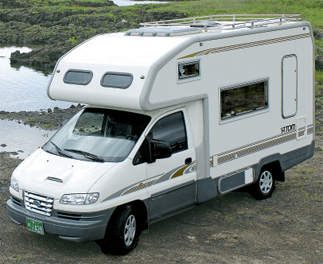 Worry no more. These days there are over 200 auto-camping sites in Korea, including 40 in the Seoul metropolitan area, with space for cars, recreational vehicles and tents. Many provide convenient facilities including hot showers and inexpensive equipment rentals. Some even provide electricity.

The sites, run by government agencies, regional governments and private organizations, charge between 10,000 won ($7.80) and 25,000 won per night, making for a very affordable weekend escape.

Interest in camping has grown in Korea in recent years. Some Internet blogs catering to campers now have thousands of members. Camping First, which opened in 2007 and has become the biggest camping blog on Naver - the largest portal in the country - has over 40,000 members. Camping and “caravanning” events such as the 2008 FICC Gapyeong International Rally and the Auto Camping Festival have also helped generate interest in camping.

According to Auto Camping (www.autocamping.co.kr), a camping community site, there are over 100,000 campers in the country, an increase of 30,000 from the previous year.

That increase is partially due to the implementation of the five-day workweek starting in 2004 and the fact that people spend more time on leisure activities when their income increases, as it has in Korea, according to Hong Hye-seon, a manager at Auto Camping.

“Camping was once considered something people do for their summer vacations, but nowadays there are more people who regularly go camping on the weekends,” Lee said. “And once people buy all the equipment, camping doesn’t cost that much.”

Lee Jae-gu, 37, one of the organizers of Camping First, calls himself a camping maniac. He started camping in the summer of 2007 and is now recognized among other campers as a veteran. Lee went camping for 48 weekends of the year last year and is keeping pace with that record this year, having only missed two or three weeks of camping so far. 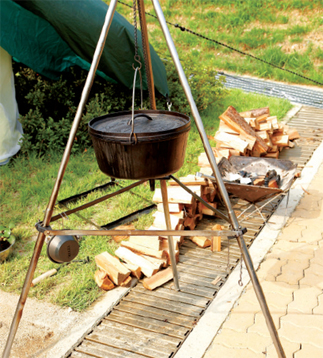 “When I was young, my family and I once went camping at Guryong Valley in Gangwon,” Lee said. “I remembered how beautiful the night sky was and I wanted to see it again.” Lee said it took some time to convince his wife to go camping with him because she was worried about the inconvenience, but now the couple take their daughter, Ye-jin, 7, camping nearly every weekend.

“When I’m at home, each person is busy doing his or her own thing, like watching television or going out, but when we’re camping, we do things together and have a chance to talk.

“I am the most happy when I arrive at a campsite after a long drive, when I’m looking at the stars with my family and when I’m sitting under the shade listening to the raindrops,” Lee said. Lee recommends not getting too addicted to camping. Still, it never hurts to pack up your gear and trek into the great outdoors.


Just a few places to pitch your tent 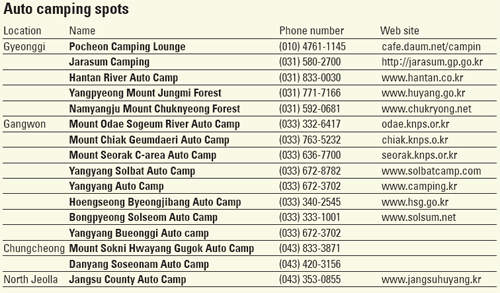 The number of campgrounds has increased rapidly with regional governments and private businesses building new and expanding existing campsites. Most of these are located near forests, beaches and parks.

Reservations are essential, especially on the weekends.

This campground in Gyeonggi is near a cool canyon with the nickname Ice Valley. There is also a meadow and an arboretum nearby. The site has restrooms, shower facilities, kitchen sinks and electricity, making it ideal for beginning campers. There is also a large discount store a 5-minute-drive away. The site covers 13,000 square meters (3.2 acres) and has 70 lots for tents and 20 tents that are already pitched and ready to go. There are also 20 camping lodges on the property.

This site on Jara Island, Gapyeong County, Gyeonggi, is one of the biggest campgrounds in the country. Jara Island is famous for its wild flowers in the spring, river swimming in the summer, the Jarasum International Jazz Festival in the fall and sledding in the winter. The campground covers 283,000 square meters and has space for 191 tents and 115 cars with trailers. People who don’t want to spend time in a tent can stay at one of the 40 camping lodges or 20 camping trailers available for rent. The site has playgrounds, an inline skating rink, a waterfront cafe, shower facilities and a laundromat. The FICC Gapyeong International Rally was held here in 2008.

This site, located in Yeoncheon County, Gyeonggi, is one of the biggest auto campgrounds near Seoul. It can accommodate 86 tents and the campground is covered with grass. There are 49 caravans. There are five restrooms, shower facilities and 10 kitchen sinks. There is also a soccer field and an in-line skating track.

This site in Jangsu County, South Jeolla, is run by the county. It has convenient, well-maintained facilities and is one of the most popular auto-camp sites in the country. The campground is roomy and can house 300 tents. It is surrounded by a dense forest and there is also a hiking trail nearby.

This campground is located in a pine forest near Osan Beach in Yangyang County, Gangwon. There is space for 600 tents and there are hot water showers.

Campers can check out the largest collection of Neolithic stone relics in the country at a site nearby.

Gear up and get out of town


With so many campgrounds offering such comfortable and convenient facilities, camping may seem like a trouble-free endeavor. But unless you’re renting a recreational vehicle, you’ll need to bring some equipment of your own.

Experienced campers suggest that beginners avoid buying anything too fancy, starting instead with a few essentials and building up to a larger collection of gear as you gain experience

The vehicles usually accommodate between four to eight people and come equipped with beds, a restroom and kitchen. Some even have televisions and microwave ovens.

Enthusiastic campers can buy an RV of their own for between 70 million won and 100 million won.

There are 10 companies in Korea that rent RVs. Prospective renters must be 26 years of age or older and have a driver’s license.