Celebrating the lowly chicken as searing summer heat sets in

Celebrating the lowly chicken as searing summer heat sets in 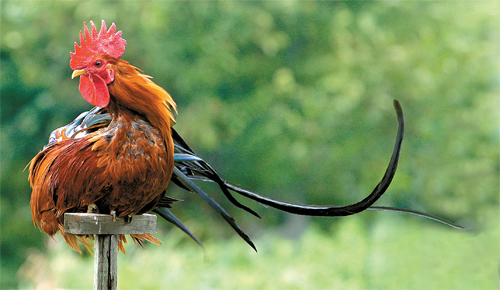 A long-tailed cock stands elegantly on a chicken farm in Ilsan, Gyeonggi. Its tail stretches more than 1 meter (3.3 feet). By Kwon Hyuk-jae

The dog days of summer are officially here.

Just the thought of it is enough to get the sweat glands going... and the taste buds dancing.

Many Koreans attempt to survive the summer heat with a bowl or two of samgyetang, which essentially is a whole chicken boiled and served in ginseng broth.

It might sound odd to eat such a sizzling soup amid the searing heat. Most people would probably prefer, say, ice cream or something mind-numbingly cold. But samgyetang is said to give you the energy, strength and health you need to endure the heat, replacing the nutrients you sweat out under the blazing sun.

So it goes without saying that an untold number of chickens will be served up in the coming weeks, and most diners probably won’t give the fowl a second thought as they slurp down their samgyetang.

Chickens, though, were more than just a meal in Korea in the past. They were culturally, artistically and scientifically meaningful creatures.

In fact, it is not an exaggeration to say that a large part of people’s lives used to revolve around chickens, from marriages and funerals to coming-of-age celebrations and ancestor worship.

In the past, a rooster and hen symbolized the groom and bride in traditional marriages. During funerals, colored chicken-shaped images adorned the top of the bier ? or the carriages used to carry corpses. Many Korean traditional paintings and ornaments also depict chickens.

Lest you think that’s strange, it’s worthwhile to point out that other countries revere the birds as well. 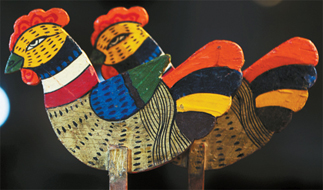 Have you ever wondered why French football fans cheer on their team by waiving chicken dolls in the air? Roosters are the nation’s representative animal. In Portugal, roosters symbolize justice and happiness, which is why you’ll find chicken caricatures throughout the country.

So perhaps you’ll remember the accomplishments of these creatures the next time you dip your chopsticks into a piping hot bowl of samgyetang.

“Chicken tops” is the term used for the wooden chicken sculptures found on funeral biers a long time ago in Korea.

Chickens were thought to have the ability to guide the deceased along the path to heaven and repel evil forces. Nothing about the wooden sculptures depicts the gloominess of a funeral. Far from it. Red, yellow and blue were featured strongly, and bold strokes make the pieces stand out like expressionist paintings.

All of the colorful ornaments displayed at the Seoul Museum of Chicken Art in Bukchon Hanok Village in central Seoul are chicken tops. They are part of a collection provided by Kim Cho-kang, a 70-year-old professor emeritus at Ewha Womans University.

Shocked by the sight of a countryside guesthouse owner mercilessly burning chicken tops for heat during a school trip in the 1980s, Kim became determined to save the relics of another era, traveling around the country and eventually building a 1,000-piece collection.

Kim developed an interest in other chicken art, such as traditional paintings and crafts, eventually collecting 2,000 items. She even wears a pendant necklace and earrings in the shape of chickens.

“The head of a rooster represented the respectable career of Joseon Dynasty [1392-1910] aristocrats and its big, sharp talons symbolized power,” Kim said. “The rooster was thought to have courage to protect its family and to be reliable enough to wake people up every morning, while hens demonstrated exemplary maternal traits.”

Thanks to Kim, you can enjoy most of the Korean chicken ornaments, paintings, sculptures and other works that still exist.

The museum presents a huge array of this art, including traditional paintings of red chickens and cabinet drawers embroidered with images of the birds.

It also features work from other countries, such as a chicken painting on a vinyl record and a small glass sculpture of a fowl with an elongated tail from Japan. There’s also a stuffed chicken from Hungary. Additionally, the museum displays chicken art in everyday products, including dishes, bowls and cups. 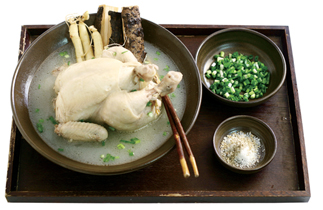 There is a legend in Portugal called “The Chicken of Barcelos.” According to the tale, a pilgrim was staying overnight in a house during a journey to visit sacred places. The maid of the house fell in love with him at first sight. But troubles began when the pilgrim rejected her.

Filled with anger, she falsely accused him of theft and appealed to the court. He defended himself, saying that the chicken on the judge’s plate would come to life if he is innocent. The chicken did indeed come to life, and he was found innocent.

With that tale, chickens rose up to become the symbol of justice and peace, and this is the reason why designs featuring the fowl prevail in Portugal on everything from everyday products to various kinds of accessories.

In France, the national bird is le coq, which means rooster in French. Chickens were a religious symbol and represented hope and faith in the Middle Ages. They became tied to the nation’s identity during the Renaissance period. Under the rule of the Bourbons, chickens were frequently used to represent the king, and eventually they were engraved on coins. In the mid-1800s, their images also started to appear on the royal guards’ flag and uniforms. During World War I, they symbolized the courageous heart of the French people. Today, the large sportswear company Le Coq Sportif even uses the fowl in its name and logo.

Korea also has its share of chicken-related tales. Roosters were said to chase away ghosts when the sun rose each day. It is also said that the first king of Silla from the Three Kingdoms Period (early fourth to mid-seventh century) hatched from an eggshell.

The first of the Kim clan from Gyeongju, the ancient capital of Silla, is said to have been born in a nearby forest called Gyerim, which in Korean translates to “a forest where a white chicken is crying.”


Chicken, it’s what’s for dinner ? at least in the summer.

The best food in July and August to regain strength, according to many Koreans, is samgyetang, a dish cooked by boiling a young chicken in a broth made of ginseng, sticky rice, jujube, chestnuts and garlic.

In July, an estimated 80 millions of chickens will end up on dinner tables in Korea.

From July 14 through Aug. 13 ? recognized in Korea as the hottest period of the year ? a total of 100 million chickens are expected to be consumed. That equates to at least two whole chickens for every Korean.

The popularity of chicken in the summer revolves around its nutritional qualities, which are said to provide the energy you need to beat the heat. Traditional Korean medicine handbooks like “Dongeuibogam” and “Bonchogangmok” were among the first here to detail the benefits of chicken dishes. The latter describes chickens as good for restoring health, while the former writes that chickens “replenish a weakened body and strengthen a women’s body after birth.”

While numerous restaurants serve samgyetang, some stand out from crowd. These places use recipes and techniques passed on for generations. The key, they say, is selecting the best breed of chickens and boiling them for a long time. The best restaurants also serve male chicks, because they have less body fat than females.

Without further ado, here are some of the top places to get samgyetang:

Jangan Samgyetang (02-753-5834) ? which has locations in Bukchang-dong, central Seoul, and Jeongja-dong, Bundang District ? uses male chickens that are around 49 days old. Aside from the basic ingredients, no other seasonings are used. The chefs boil the chicken in a big iron cauldron for more than two hours. The fried and spiced chicken amnion side dish is almost as popular as the main course.

Goryeo Samgyetang (02-752-9376) in Seosomun-dong, central Seoul, has been in business since the 1960s. It also uses 49-day-old male chicks and adds various herbs, boiling the concoction for more than three hours.

Gangwonjeong (02-719-9978) in Yongsan District, central Seoul, uses high-quality chicken from a farm operated by a relative of the owner. The restaurant sprinkles diced green onion, black sesame seeds and sunflower seeds on top of the samgyetang, adding more savory flavor to the dish.

At Samgyetang Maeul (02-596-7476) in Banpo District in southern Seoul, samgyetang is the only dish on the menu. Sticky rice is served in an earthen bowl instead of inside the chicken. The restaurant boils young chickens for 12 hours.