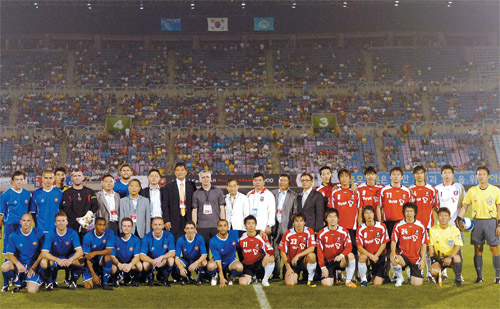 FC United, on the left in blue, and Bucheon FC, on the right in red, sit for a snapshot just before their game on Saturday in Bucheon, Gyeonggi. Bucheon FC and FC United played a soggy game in the rain that day that ended with a 3-0 win for Bucheon, but that didn’t dampen the spirits of the players. Provided by the organizer

On Saturday night, 25,000 spectators braved the heavy rain to take in a friendly football match featuring Park Ji-sung in Bucheon, Gyeonggi. But the fans weren’t there to watch the Korean national team captain and Manchester United player. They were there to cheer on another man with the same name - a midfielder for the semiprofessional squad Bucheon FC.

This Park Ji-sung doesn’t play football full-time on a multimillion-dollar contract, like his more famous counterpart. Instead, Park spends just part of his time living out his dream of playing football and spends the rest working late shifts as a delivery man for a restaurant specializing in jokbal, or steamed ham hock.

The match - the World Football Dream Match 2009, sponsored by SK Telecom - was a historic first. It was the first meeting between Asian and Western supporter-owned teams. Teams that adhere to the supporter-owned system are semiprofessional and receive the majority of their funding from fans rather than corporate sponsorship.

The host, Bucheon FC, plays in the K3, the lowest tier in Korean football. Its opponent, FC United of Manchester, is a team in the North West Premier League Division, the seventh tier of league football in England.

“It’s an exciting experience for us. I’ve been a Bucheon supporter since the beginning but having moved to Cheonan, South Chungcheong, I couldn’t come to any games last season,” 28-year-old office worker Jung Jae-kyung said. “I’m back this year and it’s a surreal feeling as a fan to finally experience a game like this.”

With a steady rain falling throughout most of the game, Bucheon FC started strong and was ahead in the first half. The Korean team’s captain, Park Mun-ki, scored the opening goal on a header off a corner kick in the 29th minute to a roar of approval. In the second half, FC United controlled the pace of the game before allowing two late goals with less than 10 minutes remaining.

But the final score didn’t dampen the spirit of camaraderie circulating among the players. They exchanged shirts midfield and trotted to the west end of the stadium, where the Bucheon FC supporters, who call themselves the Hermes. gave both squads a round of applause.

Most of the stadium was filled with first-time visitors. A large number of fans stayed well past the final whistle.

Some gushed at the level of play and stated they would be back for more, but the most excited fans by far were the Bucheon FC supporters Approximately 300 of the 1,000 Hermes remained standing from beginning to end, chanting and cheering both teams on. 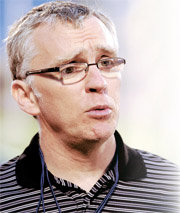 ‘Our club is about the supporters and what’s important to them.’ FC United General Manager Andy Walsh 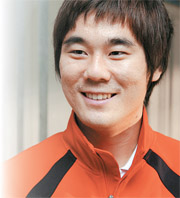 ‘The supporters and the environment around here are great.’ Bucheon FC midfielder Kim Tae-ryu

Given that the K-League’s most popular club, Gangwon FC, averages 16,330 spectators per game, the attendance figure of 23,000 meant the match was a rousing success.

“We once had a club, but we lost it,” Choi said, referring to the Bucheon SK, a professional club in the K-League that was moved to Seogwipo, Jeju in 2006. The creation of Bucheon was a direct response to this move. “Bucheon has the financial stability to support a football club. I hope we can experience many more games like this in the future.”

Bucheon FC and FC United are just two of only four football clubs in the world that are supporter-owned. The others include AFC Wimbledon and FC Yokohama.

“It wasn’t easy, we had nothing when we started off. We asked city officials for support but they weren’t willing to listen,” the team’s media relations manager Lee Yoo-guk said. “The city required us to have sponsors and that wasn’t easy. We went back and forth, bouncing between reluctant sponsors and city officials for six months until a regional politician stepped in and gave us the support we needed [in 2007].”

The club participated in its first season in the K3 in the 2008 season as the only supporter-created football club in Korean history. They finished 13th out of 15 teams with a record of seven wins, seven ties and 15 losses. The team is currently sitting in seventh place and, backed by its 1,000 supporters, clearly has its sights set on bigger goals. 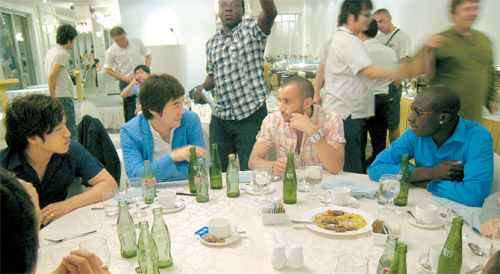 Bucheon FC and FC United players have dinner together at the Mayfield Hotel in Gimpo, Gyeonggi, on Friday. Provided by Bucheon FC

Bucheon FC and its supporters actually got the inspiration to create the team from FC United.

FC United supporters can trace their original allegiance to Manchester United. Many Man U fans, already disgruntled with the club’s high ticket prices, walked away when Malcolm Glazer took over the club in 2005 and launched FC United as a supporter-owned club. Sticking to its founding principles, FC United lets its fans pay what they can for season tickets.

“It’s affordable for the fans and provides for a great experience. It’s not affordable to take in Premiership games anymore,” FC United supporter Mike Bibby explained.

It’s not all about representing the community and providing entertaining and affordable football for the fans. Having started in England’s lowest division, the 10th, FC United has climbed up to the seventh tier on the back of its attendance records, the strongest in the division.

The English football system has a relegation system that connects the Premiership all the way down to the 10th division. The bottom three teams are relegated to lower tiers and top three teams from the league below are promoted to replace them. The club regularly averages over 2,000 fans in a division with teams that often attract small crowds of 300.

“Our most immediate goal is to raise funds to build our own stadium and improve our community work. The amount of community work we have done has improved by as much as 150 percent over the past three years,” Walsh said.

The players that fill the Bucheon FC roster are like underdogs gnawing at a chance for redemption. There is a countless number of players who, like Park Ji-sung, sacrifice their time and energy for the chance to play football. They’re a throwback to an era when representing the community and having the opportunity to play the game with passion meant more to players than inflated salaries, egos and the ridiculous endorsements that come with recognition and stardom.

Unfortunately, the pay is not enough to allow the players to make it on football alone, and all of them hold down part-time jobs to get by. Both Bucheon FC and FC United players make anywhere from $200 to 900 per game depending on their game performance and level of effort.

But most players have a solid track record and either have experience in the K-League or abroad.

Mputu Kakkgr Jersy, or Kaka, is a refugee from the Democratic Republic of the Congo who has played semipro football in Korea for the past five years, despite restrictions that limit foreign players from participating in league games. 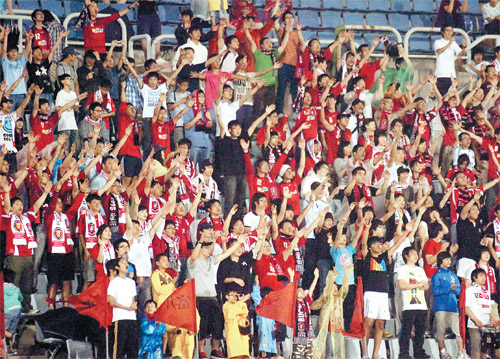 Kim Tae-ryu, a 27-year-old midfielder, has played in Korea’s top professional league and in one of the country’s best university football programs. The Korea University graduate played for the Chunnam Dragons of the K-League for a year before he was sidelined by an injury. He is currently taking graduate school courses and hopes to work in football administration. He is carrying out his two years of mandatory military service by doing administrative work.

“I’ve been playing football for a long time, but the supporters and the intimate environment around here are great,” Kim said. “There aren’t many stories out there like Bucheon FC. The history of the club, albeit brief, is moving.”

Team Captain Park Mun-ki is another 27-year-old former Chunnam player. Having scored the opening goal in Saturday’s match, Park was named the game’s most valuable player. He anchors the team’s defense and played in the professional league in Singapore until last year.

“This place has a great familial environment. Some have reservations about the K3, but the level of play is not much lower than that of other football leagues,” Park said.

The same can be said about FC United players. Jerome Wright is a 23-year-old midfielder for FC United. Off the pitch, he works as an administrator.

“We have some builders, delivery guys and college students on our squad,” Wright said. “We’ve been together for the past four years, and practice three times a week in the evening and play two games a week. We have played in Sweden and Germany, but it’s our first time in Korea and it’s so different from what we’re accustomed to. It’s great.”

Bucheon FC has modeled itself after the dedication and commitment shown by FC United. That’s refreshing for sports fans who long to root for the game of football and what it truly stands for.

“We do not have any sponsors and we do not have a corporate logo on our jersey. The jersey is the symbol of the club and it is not for sale,” explained the team’s General Manager Andy Walsh. “Our club is about the supporters and what’s important to them. All the revenue raised from the merchandise and fund-raising activities goes to support the team.”