No such thing as a free bribe

No such thing as a free bribe 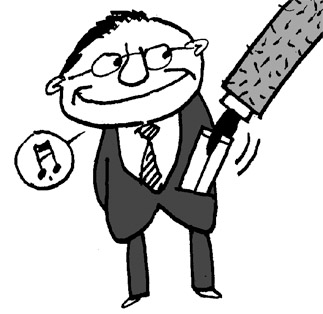 German composer Richard Wagner is now lauded as a musical genius who took opera to
new dramatic heights. But to his contemporary foes, he was a scandalous scrounger.
Plagued for most of his life by debt, Wagner would often write to acquaintances asking for
money. He was an expert in the field of solicited generosity.

His friend Franz Liszt was also his father-inlaw, and Wagner cunningly used his wife to encourage sympathy. “I would commit theft if I could make my wife happy,” he said.

His financial dire straits, however, owed more to his expensive and fashionable taste rather than outright poverty.

While working on his masterpiece, “The Ring of the Nibelung,” Wagner spent a fortune to provide himself the perfect environment for composing, with specially tailored curtains to absorb noise and daylight, the best carpeting and silk clothes. He believed art could not be crafted with cheap liquor and a hard bed. Paul Johnson, in his book “Creators,” called Wagner a hedonistic sponge.

Although not as extreme as Wagner, artists generally cannot seek excellence purely on their talent alone. Many famous artists were therefore born of the rich patronage for the arts.

Joseph Haydn, known as the “Father of the Symphony,” was given limitless freedom to experiment under the wings of Hungary’s aristocratic Esterhazy family.

Few composers enjoyed such luxury and support, as Haydn was free to choose any musician
and rehearse as much as he wanted without financial worry.

But there is always a price to pay. To satisfy his principal patron Prince Nikolaus, Haydn wrote 126 trios for the baryton, the prince’s favorite string instrument, now rarely played.

Patronage sometimes can eat away at artistic freedom, which had led some artists to draw strict lines against sponsorship.

The famous artistic couple Christo and Jeanne-Claude rely on bank loans to finance
their mammoth environmental works, covering monumental landscapes and buildings with
cloth, while rejecting sponsorships. To them, the only person authorized to offer a freebie is Santa
Claus. It’s a pity that such nobility and pride is so rare among politicians and judges.


The bribery scandal swirling around businessman Park Yeon-cha has taken Korea’s political and governmental circles by storm, and a candidate for prosecutor-general recently had to step down on revelation of his surreptitious “sponsorship” activities. No luxury comes without a price tag.

This chain of toxic practices should be cut off to stop its poisonous spread.

Legislators and prosecutors are much better off than artists, and won’t likely go hungry even without a few patrons on their side.