From evictions to Obama, best press photos on display

From evictions to Obama, best press photos on display

Images capturing Barack Obama, the devastating effects of a cyclone and a gun-wielding police officer clearing out a foreclosed home are on display in Seoul this week as one of the most prestigious press photography exhibitions in the world rolls into town.

“The 2009 World Press Photo exhibit” will be held at the V-Gallery in Seoul Arts Center from Friday through Aug. 26. The event is part of a tour spanning 100 cities in 45 countries. This year marks the sixth time the WPP display has come to Korea.

The exhibition features 200 photos that won the WPP’s annual contest in 2008, including the World Press Photo of the Year, taken by Anthony Suau for Time magazine.

A total of 5,508 photographers and photojournalists from 124 countries submitted 96,000 pictures for the 52nd competition last year. WPP, a nonprofit organization founded in 1955 in Amsterdam, the Netherlands, handed out awards to 64 photographers from 27 countries including Korea. 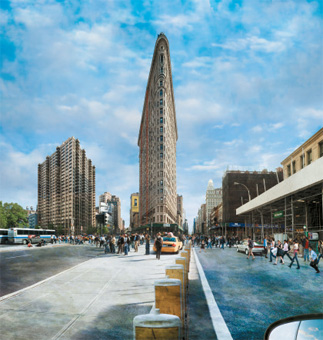 The photo that took the top prize (seen above) shows an armed officer ? Robert Kole, a detective with the Cuyahoga Country Sheriff’s Department in Cleveland, Ohio ? searching a home to ensure its residents moved out following an eviction. The stark black-and-white picture depicts a period of turmoil in the United States as an untold number of people were forced out of their homes for failing to make mortgage payments amid a crushing economic downturn that has battered the housing industry.

“The strength of the picture is in its opposites,” MaryAnne Golon, WPP Jury Chair, said in comments posted on the organization’s Web site. “It looks like a class conflict photograph, but it is simply the eviction of people from a house following foreclosure.

“Now war in its classic sense is coming into people’s houses because they can’t pay their mortgages.”

As juror Ayperi Ecer put it on the site: “We have something here which, visually, is both clear and complex. It is not about issues ? 2008 is the year of the end of a dominant economic system.”

Another prizewinner, by Olivier Laban-Mattei for Agence France-Presse, shows a girl running through a bunch of books placed on the ground for drying after a cyclone hit the southern part of Myanmar.

The cyclone swept over the country on May 2, killing 130,000 people and demolishing 450,000 houses. It was recorded as the biggest natural catastrophe in the country’s history. The girl was running to get food being handed out from a nearby boat.

Visitors can also see a moving photo by Callie Shell of U.S. President Obama and his wife Michelle sitting side-by-side on a train during the presidential campaign last year.

Some of the most interesting works on display are Im’s cityscapes, which play with the common perception that photos depict true-to-life scenes. His photographs appear to show actual cities, but upon a closer look, viewers realize that the works are collages of images of different cities that existed at different times.

The Photograph as Contemporary Art exhibition is open from 11 a.m. to 8 p.m. every day except Mondays through Aug. 20. Admission is free. Take line No. 1 to Jongno 5-ga Station, exit 1. For more information, call (02) 708-5015 or visit www.doosangallery.com.