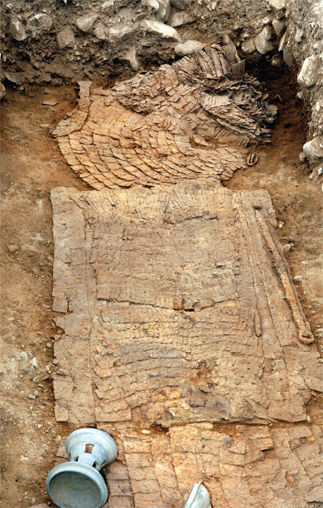 In a historic discovery, a collection of fifth-century scale armor was unearthed last month in Gyeongju, North Gyeongsang. [JoongAng Ilbo]

GYEONGJU - The warrior’s body and bones are long gone, decayed into the soil. But the armor that once protected him from enemy swords and arrows has survived the passage of time and has been revealed for the first time in 1,600 years.

The armor was believed to have been used by Silla warriors sometime between the fourth and sixth centuries.

Although the discovery may not be as impressive as the terra-cotta figures of ancient China, it is just as important to the field of archaeology in Korea.

This is the first time such a vast array of the armor of the cavalrymen of the Three Kingdoms period (57 B.C. - A.D. 668) has been unearthed in such good condition. The Three Kingdoms era in Korea refers to the period in which three kingdoms - Goguryeo, Baekje and Silla - ruled the country.

Last month, archaeologists at the Gyeongju National Research Institute of Cultural Heritage and officials of the Cultural Heritage Administration opened the excavation site to the public. The armor on display included complete sets of scale armor and barding, or armor for horses.

“This is the first time in East Asia that such complete sets of the armor of the heavily armed cavalrymen have been found,” Lee Geon-mu, the chief of the Cultural Heritage Administration, said. “It’s also the first evidence of the existence of the Silla cavalrymen.” 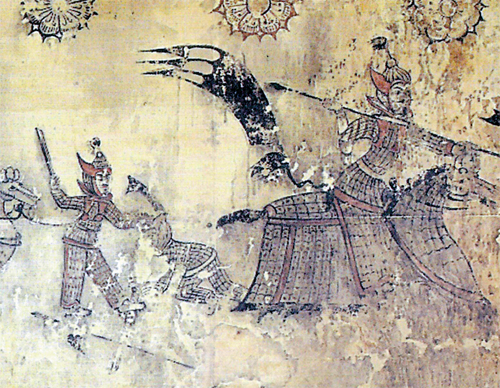 Evidence of the heavily armed cavalrymen of the Silla Dynasty previously existed only in murals like the one below.

Archaeologists say that the pieces provide an important clue as to how the Silla Dynasty adopted the use of heavily armed cavalrymen from Goguryeo and used them to strengthen their national defense capabilities. The use of cavalrymen in this way enabled Silla to eventually conquer Goguryeo and Baekje and unify the peninsula.

Silla conquered Baekje in 660 and Goguryeo in 668. Thereafter, Unified Silla occupied most of the Korean Peninsula.

The capital of Silla was Gyeongju and thus, a significant number of Silla tombs can still be found in that city. The area was registered on the Unesco World Heritage list in 2000 as The Gyeongju Historic Areas.

For those in academia, the find is a major breakthrough, and solves a decades-old mystery.

The archaeologists at the Gyeongju National Research Institute of Cultural Heritage excavated some sets of barding in Haman County, South Gyeongsang, in 1992. Plain metal armor has also been unearthed. But there have been no discoveries of scale armor, although supplementary pieces presumed to have been part of the scale armor have been found.

Scale armor is made of hundreds of small, intricately connected metal pieces. Compared to ordinary metal armor, scale armor makes it a lot easier for warriors to move, significantly enhancing the mobility of the entire army.

Murals from the era show that scale armor was used during the Three Kingdoms period, but without any hard evidence, Korean archaeologists have only been able to guess at what the armor might have looked like.

“Scale armor is known to have been used in other countries like China, but in Korea it only existed in rock paintings that we haven’t seen in person,” Lee of the Cultural Heritage Administration said.

One of the things that kept the scale armor hidden for such a long time was the burial traditions of the time.

“In Goguryeo it was customary to leave the belongings of the dead outside the tombs so that passersby would take them. This tradition has made it extremely hard to preserve the relics of the time,” Lee explained.

The tomb from which the archaeologists excavated the collection of armor, Tomb C10, shows the typical characteristics of early Silla tombs. It had a coffin where the body was laid and, next to it, another box where the belongings of the dead were kept. The coffin and the box were made of wood and placed in pits made to fit them. 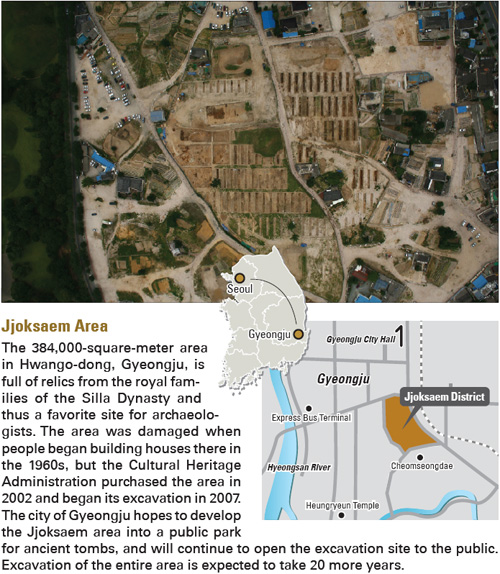 “It seems that the bodies were laid on top of the armor,” Ji Byeong-mok, the director of the Gyeongju National Research Institute of Cultural Heritage, said. “That arrangement has made the armor flat.”

Ji and the archaeologists argue that if the dead had been buried wearing the armor or if the armor had been laid on top of the dead, the armor would have been uncovered in an uneven manner due to the difference in the time it would have taken for the bodies and the wood to decay.

“Looking at the state in which it’s been excavated, we’re pretty certain that the armor was laid under the bodies. With time, the bodies seem to have vanished into the soil,” Ji said.

It is uncertain as to whom the tombs belonged, experts say, but judging from the armor found therein, they believe they must have belonged to people of high status.

The armor weighs between four to five kilograms, with the barding weighing about four to five times more. In addition to this latest discovery, archaeologists have uncovered about 150 tombs and 3,000 relics including gold jewelry and saddles. 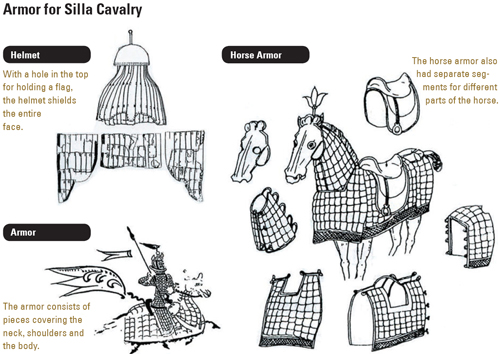 Once the Gyeongju National Research Institute of Cultural Heritage completes the excavation, it plans to preserve and exhibit a portion of its findings. Ji from the Gyeongju heritage institute says that it will take between five to 10 years for the armor to be fully restored to its former glory.