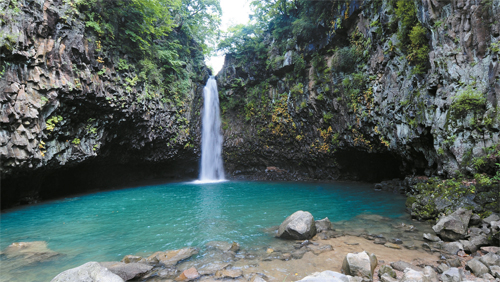 The Jaein Waterfall in Yeoncheon County, northern Gyeonggi, opened to the public in May. The scenic fall is located in a military operation area west of the Hantangang River. It is closed off during the winter months but is open to the public from May to September.

The water cascades down an 18-meter (59-foot) cliff into a small but deep pool of water. As the major tourist destination in Yeoncheon County, many visitors flock to the waterfall during the summer months.

To get to the waterfall, take a bus from the Seoul Sangbong Bus Terminal to Jeongok, then transfer to the bus to Jaein Waterfall.

Visitors can also take a train on the Gyeongwon line from Uijeongbu to Yeoncheon. The train ride is approximately an hour long.

For more information, call the Yeongcheon County Bureau of Public Cultural Information at (031) 839-2064 or check out http://english.gg.go.kr.