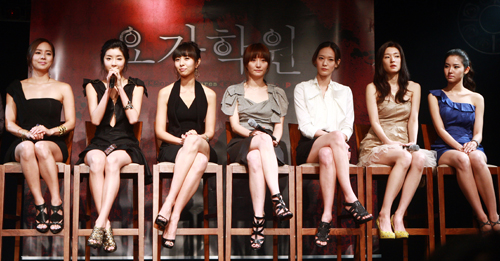 The word beauty is often associated with nature, the arts and, of course, the female sex.

And many women spend a good deal of time trying to fit that description, spending an untold amount of money on expensive haircuts, slathering themselves in anti-wrinkle creams and buying high-end makeup, perfume and jewelry.

But the pursuit of beauty can easily become an obsession, which often leads to unintended consequences - especially in today’s appearance-focused world. Just look to a number of celebrities who have taken plastic surgery and Botox a little bit too far, sometimes with frightening results.

So what better time for “Yoga School,” a horror film that mixes the unending pursuit of beauty with a heavy dose of fear. 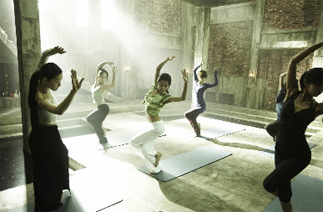 A scene from the upcoming horror film “Yoga School.”

The movie, which is scheduled to be released next month, tells the story of five women who are locked up in a mysterious yoga school, which each had visited in the hopes of improving their looks.

“A woman’s desire for beauty is universal, and I thought I could successfully incorporate that concept into a horror film because blind pursuit of beauty has such a destructive power that can cause people to go to extremes,” Yun Jae-yeon, the director of the film, said in a press conference Tuesday.

Yun previously displayed her horror filmmaking skills in the third episode of the popular Korean horror series “Whispering Corridors” in 2003.

“I like the horror genre because I can talk about social issues in an indirect way using diverse symbols and metaphors and somewhat surreal sets or scenes,” she added.

Yoga School has seven distinct characters, including a perfectionist career woman who had been successful until she was outshined by a younger co-worker, a former popular actress who faded into obscurity, a girl battling weight issues, and a woman beset by numerous personal misfortunes including a divorce and a failed plastic surgery procedure.

All of them have something in common: a belief that beauty will help them overcome the difficulties they face.

They all are told to abide by several rules when they sign up for the yoga classes. The trainees, for example, agree to entirely cut themselves off from the outside world for seven days of rigorous training, a period in which they are not allowed to see themselves in a mirror or eat without permission.

Not much more about the movie plot has been released, other than the fact that it all ends terribly for the women.

But the cast members said they feel the movie will be able to distinguish itself in the crowded horror genre.

The film has generated some buzz due to a star cast that includes Eugene - a former member of popular girl group S.E.S. - and up-and-coming actress Park Han-byul. The lead characters are all women, and more than half of them (Lee Young-jin, Kim Hye-na, Cha Soo-yeon and Park Han-byul) have previous experience in horror films.

While all of the characters get into trouble because of their pursuit of beauty, the film begs the question of whether the actresses themselves obsess over their appearances in the real world.

“I’ve got my own complex about my appearance, but it is not something that can be overcome in a day,” actress Park Han-byul said. “If I think about it too much I will start constantly finding faults. I always try to take a positive view of myself and be confident of who I am.”