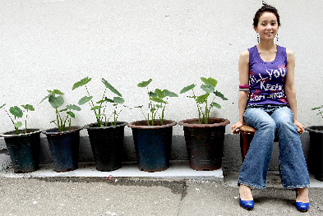 Many famous movie stars can attribute their initial success to a single flim that served as a turning point in their careers. For budding Korean actress Joan, who goes by one name, that movie might very well be “Holding King Kong.”

The film tells the touching story of a weight-lifting team at an all-girls middle school in the countryside and their inspiring coach, played by actor Lee Bum-soo.

Joan transformed herself entirely to play the role of a weight-lifting country girl roughly 15 years younger than herself, gaining eight kilograms (17.6 pounds), building up her physical strength and nailing down a perfect Jeolla accent.

“When joining this film, my resolution was, ‘Don’t try to look pretty, just lose yourself in the role,’” the 28-year-old actress said. “I want to be recognized for my acting abilities, not for my looks.”

After joining the cast, Joan had only two weeks to get in shape for the role. She had to undergo intense weight training for five hours a day.

She also ate four to five meals daily, always carried chocolate in her pocket and had to get makeup put on every morning throughout shooting.

“Surprisingly, as my body shape changed, my behavior and actions changed accordingly. Normally I would have worried about disturbing my hair or makeup, but the way I behaved and acted, even including the way I moved a finger, also changed,” the actress said.

While the average woman can barely lift 20 kilograms of weights, Joan eventually lifted nearly twice that in the movie.

“Lifting a barbell from the ground is not so difficult, but it is not easy to hold it up above my arms,” Joan said. “[The film] is all real except the weight of the barbell.”

In the movie, for instance, she is shown lifting 60 kilograms, though she was actually lifting 39 kilograms - still an impressive feat.

Joan said she pitied the character she played, who is an orphan and joins the weight-lifting team because she has nowhere to turn.

“When an actor feels pity for the character, that’s when he or she begins to get absorbed in the role. When I was reading the script for this movie, I immediately took a shine to the character,” Joan said.