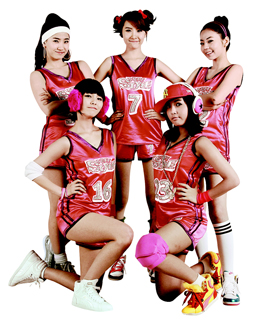 The Wonder Girls, the five-member girl band currently opening for the Jonas Brothers in the United States, has made their American television debut. On July 20 local time they appeared on the Fox network’s “The Wendy Williams Show,” a daytime talk TV program.

Before the group came on stage, Williams, the host of the show, briefly introduced them to the audience, calling them “the No. 1-viewed on YouTube,” and showing them her own Wonder Girls CD, adding she was “very excited to have them.”

The girls appeared on stage and sang their hit song “Nobody” in English to a cheering crowd.

After their performance, they briefly chatted with Williams, who exclaimed, “That was fabulous!” and asked how to say hello in Korean.

The members introduced themselves as Sun, Mimi, Yubin, Yenny and Sohee. In Korea, Sun, Mimi, and Yenny go by their Korean names Sun-ye, Sun-mi and Ye-eun, respectively.

On the official Web site for the program, viewers posted comments congratulating the girls on the debut.

One viewer said, “The song was quite catchy and I loved the cute dance... I enjoyed it.” Another posted, “I loved the show ... they’ve got a long way to go, but I see great potential in them.”

Yesterday Park left another message on Twitter about the band.

“We’re starting radio promotions,” he explained. “So please make a lot of requests to your local top 40 radio [stations] and Radio Disney.”