Students get the dirt on healthy eating habits

Students get the dirt on healthy eating habits 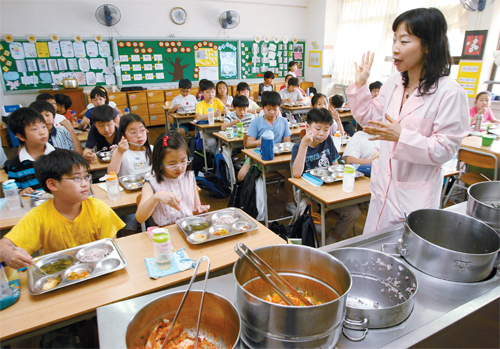 Teacher Lee Eun-young talks about food and nutrition with students at Wirye Elementary School in Dunchon-dong, eastern Seoul, in May. By Kim Kang-bin

Beads of sweat form on the foreheads of about 60 fifth graders as they plant rice in an empty lot behind Sanya Elementary School in Suginami, Tokyo.

“I didn’t know how hard it would be to produce rice,” 11-year-old student Deiki Mori said. 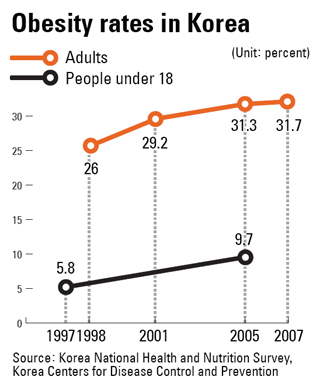 The lot that stood empty for decades is now being put to good use as a garden where Sanya students are learning more about what they eat and how it got on their plates so that they can have a better relationship with food.

In the school’s class on nutrition, which began in 2005, students are learning how to raise carrots, tomatoes and other crops. They’re also learning how to make their own lunch and leave less food on their plates at the end of their meal. 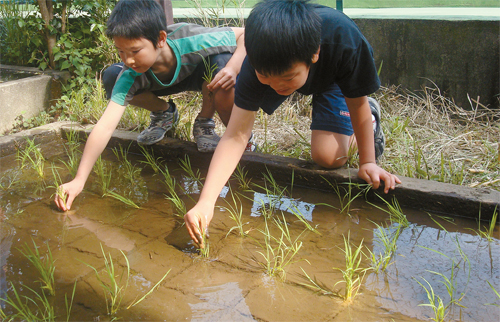 Students at Sanya Elementary School in Suginami, Tokyo, Japan, plant rice as part of the their nutrition class. By Park Tae-kyun

The class had an immediate effect on the students. According to teachers and parents involved with the school, more students are now willing to eat fruits and vegetables than they were before the program began.

“My children used to prefer eating hamburgers and curry dishes but since they started taking the class they have begun to eat fish and miso soup. What a surprise!” Michiyo Ito, a 44-year-old mother of two, said.

Developed countries like Japan, the United States and Britain have recently increased the emphasis on nutrition in the classroom in order to counter rising obesity problems among teenagers.

Japan, for example, enacted a law on food and nutrition education in 2005. The aim of the law is to educate Japanese people of all ages how to eat more healthily. Young children are given opportunities to plant rice and grow vegetables as a way to get them interested in what they’re eating and help them break bad eating habits.

At the Sanya school in Japan, parents are invited to participate in cooking classes alongside their children to help ensure that the healthy eating habits learned at school continue at home.

Korea is lagging when it comes to nutrition education. Elementary school students in first through fourth grade are not given any education on food and nutrition. Those in fifth and sixth grade take 10 hours of silgwa, an experiential course, per year. But the 10-hour class is not solely devoted to nutrition. It also touches on topics such as sewing and gardening.

As students get older, the number of nutrition class hours they are required to take decreases. So although the number of hours students spend in silgwa increases to 17 hours for middle school students, it decreases back to 12 hours when they go to high school.

These hours are not always completed by students at schools. Due to the weaknesses in the nutrition education curriculum and shortage of staff nationwide, schools are sometimes unable to offer the minimum number of class hours. In these cases, private organizations and companies such as the YMCA and Dole Korea are occasionally brought in to conduct the nutrition classes.

Studies show that a lack of knowledge about nutrition leads to unhealthy eating habits and obesity in the young.

The absence of education about nutrition also leads to an increase in obesity, the study found. For Korean children between the ages of 7 and 12, obesity rates increased to 8.6 percent in 2005 from 4.2 percent in 1997. The rate for Japanese children increased just 0.2 percent between 1997 (7.4 percent) and 2007 (7.6 percent).

Scholars seem to agree on the impact of nutrition education on childhood obesity.

“The most important function of nutrition education is that it lowers obesity rates among children,” Jeong Hye-kyung, a professor of food and nutrition at Hoseo University, said.

Increased awareness of these problems led the Korean government to recognize the importance of nutrition education for young people.

In May, the government announced it would require improvements in the nutrition education curriculum with a law effective in November.

A handful of schools have already begun to supplement their nutrition curriculums with new classes. Wirye Elementary School in Dunchon-dong, eastern Seoul, is one of them.

On a recent visit to the school, 29 fifth graders were taking a class on food and nutrition where they were learning what goes into their food.

“One portion of ramen contains more than 30 additives. Why [do ramen manufacturers] use additives?” Lee Eun-young, who is in charge of the nutrition class, asked.

“In order to make it tastier,” Song Ji-hwan, a student who was wearing a blue apron, answered.

“Ramen should be preserved for a long period of time,” student Cho Hye-in suggested.

Lee and her students then moved on to the next topic - ice cream.

“One [serving of] ice cream has over 10 additives including emulsifying agents and sweeteners,” Lee said.

By the reactions of her students, it was clear that they found the information hard to swallow.

After some discussion about the benefits of foods with fewer additives, Lee and her students mixed up a batch of ice cream made with sweet potatoes, milk and fresh cream.

“I once made a pizza at home with my mom. I want to make this sweet potato ice cream with my mom, too,” Choi Si-kyung, a student, said.

Wirye Elementary School started its nutrition class a year ago to teach students to eat healthy foods and help prevent them from becoming overweight.

Lee teaches nine hours of nutrition classes per week. In her classes, students learn how to check the amounts of fat, protein, carbohydrates and sodium in processed foods. They also learn about the nutrients in specific kinds of food. Students are also given advice on how to lower the amount of fat and sodium in their diets.

She says that since they started the class, however, an increasing number of students are eating balanced diets that include more vegetables.


Nutrition education around the world

Many developed countries are battling with high childhood obesity rates. And with the increasing number of dual-income families, parents are finding it more difficult to teach their children how to eat well. To fill the gap, schools have stepped in by offering more classes on food and nutrition.

In the United States, two out of three young people are obese or overweight. With that in mind, the United States Department of Agriculture and the Department of Health and Human Services began issuing Dietary Guidelines for Americans. The document was updated for sixth time in January 2005. Agriculture in the Classroom programs that get students involved by giving them the experience of raising their own vegetables and other crops are now conducted throughout the country.

The DHHS also plans to increase the percentage of schools offering nutrition classes from 85 percent in 1994 to 95 percent by the end of 2010 at schools nationwide through its Healthy People 2010 campaign. Five a Day is another U.S. government campaign. It began in 1991 and urges people to eat five servings of fruits and vegetables a day.

In France, nutrition education focuses on taste and encourages children to appreciate the value of organic foods and French cuisine. Every second week of October is designated La Semaine du gout, or national tasting week. During the week, children are encouraged to take part in cooking competitions and other food-related activities.

In the United Kingdom, parents, the government and schools work together to improve childhood nutrition through the Whole Child campaign.