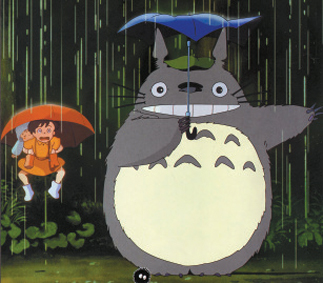 Detail of a poster for the Japanese film “My Neighbor Totoro”

Raindrops fall one by one on the paddy fields.

Suddenly, a shower of white streaks obstructs the view. Through the window of rain, rice paddies and fields sink into dark green, and the distant mountains coated in clouds and mist look like ink spreading on rice paper.

These scenes are from the animated film “My Neighbor Totoro” (1988), which is set in a rural Japanese village in the 1950s.

The poetic beauty of the scenes is comparable to the idyllic landscape paintings created by Barbizon school masters like Jean-Francois Millet and Jean-Baptiste-Camille Corot.

The early summer rain in My Neighbor Totoro, directed by Hayao Miyazaki, plays an important role in the story.

As the rainfall continues into the evening, the heroine, Satsuki, and her younger sister, Mei, venture out to a bus stop to greet their father with an umbrella. It is there that they meet Totoro, a big and hairy spirit of the forest. Satsuki offers the umbrella to Totoro, and they fast become friends.

Japanese anime often uses rain as a backdrop, creating refined and beautiful scenes like those in My Neighbor Totoro. But it can be exceedingly difficult to portray rain in art.

In Japanese anime films, rain is represented through both long and short vertical straight lines that cover the screen boldly but gracefully. The technique might stem from the Ukiyo-e artists of the Edo Period, who were skilled at portraying rainy landscapes in a simple, impressive manner.

Western paintings seldom depicted rainy landscapes until the end of the Impressionist era in the late 19th century. The aforementioned Barbizon school artists in France rarely painted rainstorms. Instead, they chose to feature landscapes with rainbows showing the calm after a storm.

European landscape paintings were based on the tradition of Classicist art, in which trees, hills and water were portrayed as they are seen in nature and were arranged in balance and harmony with light.

There’s obviously not as much light when it rains, and a gloomy landscape doesn’t fit the idea of beauty represented in Classicist art.

Furthermore, it is very difficult to portray rain elaborately and realistically, other than more or less drawing a line.

For those reasons, even Romanticist landscape artists from Germany and across Europe who ventured to break away from Classicism with stormy scenes rarely included rain streaks in their works.

Think about it? it’s not easy to actually see rain in the real world when, say, looking out your window during a storm. Rain resembles streaks, or thousands of silver needles, when viewed against a darker background.

Those black or blue lines you used to represent rain in your elementary school drawing book did not depict what you actually saw, but rather what you felt. 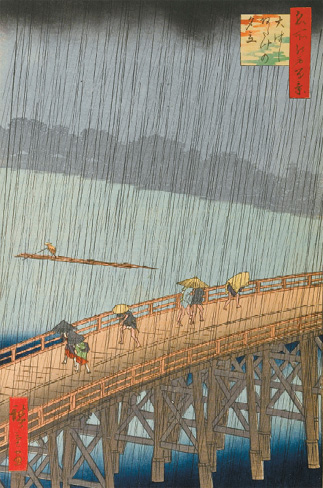 The coldness of rain drops, therefore, is why we often use black or blue straight lines instead of, say, silver or gray dots.

Rain is represented by black straight lines in Japan’s Ukiyo-e, a genre of woodblock prints and paintings for the masses in the Edo period from the 17th to 19th centuries.

In particular, the well-known print “Sudden Shower at Ohashi Bridge and Atake,” by Hiroshige of the Utagawa School (circa 1797-1858), depicts rain as black straight lines that are slanted and often cross each other. Is it possible for real rain to appear to human eyes in that way? No.

But this print, which fascinated Vincent van Gogh, doesn’t look childish. The crossing black slanted lines bring to mind the sights and sounds of rain falling down amid strong wind that rapidly changes the rain’s direction ? forcing those unlucky enough to be caught in the storm to adjust their umbrellas.

This leads me to sympathize with the people on the bridge, who shrink under their umbrellas and quicken their pace.

Additionally, the bird’s-eye perspective of this print, unlike the straight-on viewpoints in traditional European landscape paintings, helps convey the overwhelming power of this natural phenomenon.

This print is one of Hiroshige’s “100 Famous Views of Edo” series. Hiroshige often made collections of prints that portray common Japanese scenes in different seasons, at different times and in different weather conditions.

These series gave pleasure to the working-class people of Edo, now Tokyo, who were eager to see other places but did not have enough time and money.

In addition, these prints made their way to Europe, where the unfamiliar, bold style shocked artists who knew little outside of traditional Western art.

The French painter Claude Monet was impressed by the landscape prints by Hiroshige and the work of his contemporary Ukiyo-e artist Katsushika Hokusai. The prints led Monet to work on a series of paintings that depict a scene under changing light. And with that, Monet cemented the Impressionist style. 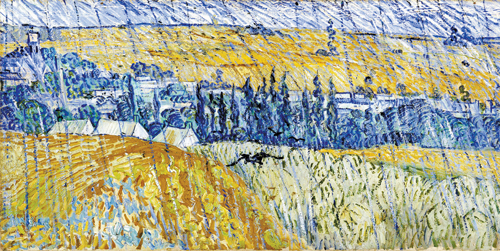 Van Gogh, too, was so fascinated by Hiroshige’s Sudden Shower at Ohashi Bridge and Atake that he even made his own copy of the print and drew (but certainly not wrote) Chinese letters on the edges.

Later, he applied a similar aerial perspective and portrayal of rain to his painting “Rain in Auvers” (1890).

Tadashi Kobayashi, a Japanese art critic specializing in Ukiyo-e, wrote in his books that Hiroshige’s prints always depict nature and humans interacting with each other lyrically.

Therefore, the prints show Hiroshige’s deep love for Japan’s nature and the ordinary people living in and traveling through it, Kobayashi said.