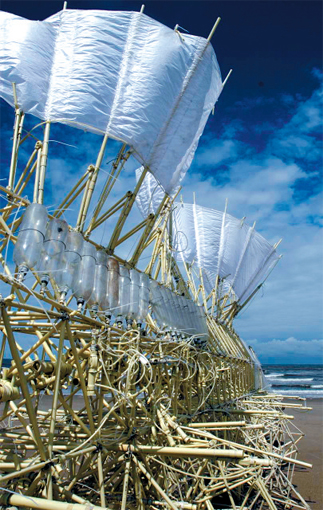 By Yang Seung-hee Contributing Writer
Ever seen kinetic art? How about stills from Japanese animation films, installation art or works from one of the most popular living artists on the planet?

Starting Aug. 11, you’ll get the chance to see such a diverse range of work, and much more, as part of a yearlong innovative art project organized by the Gana Art Center and Museum People.

And we’re not just talking paintings.

The exhibits ? which run through July 2010 ? will be held in an outdoor exhibition center in front of the Garden 5 shopping center in Songpa District, southeastern Seoul.

The first exhibit will feature works from Theo Jansen, a kinetic artist from the Netherlands who is often called “the modern Leonardo da Vinci.”

Another exhibit, scheduled for May through July of next year, will feature the works of Damien Hirst from Britain, an icon in the art world. The exhibition will include approximately 100 of his pieces ? the largest Hirst exhibition ever held in Korea.

Other exhibitions include works by designers like Tokujin Yoshioka from Japan and the Campana brothers from Brazil, who are internationally praised for their originality in design.

MUSEUM.beyondmuseum will be held in an area that stretches out over more than 1,800 square meters (19,374 square feet). Local officials hope the exhibition center, a work of art itself, will become a lasting recreational and cultural space. They foresee the exhibit drawing visitors to local businesses and organizations.

Officials say they hope businesses return the favor through cooperative branding with various artists abroad, which will create opportunities for the companies to sponsor cultural events. The companies would therefore help foster art activities that enrich the community.

The project is in line with the city’s policy goal, called “Culturenomics,” of improving the region’s competitiveness by fostering culture and art.

The MUSEUM.beyondmuseum project’s first exhibition, which runs from Aug. 11 through September, will feature work by Theo Jansen.