Canal project is ‘for the birds’

Canal project is ‘for the birds’ 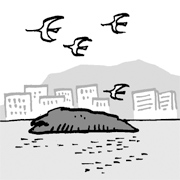 Half a century ago, several islands existed in the Han River, running through the heart of Seoul. Among them, Yeouido and Ttukseom transformed into urban areas. Nanji Island appears as a towering green mountain, and Seonyu Island, once a filtration plant, was transformed into a park area. An opera house will be built in Nodeulseom, an artificial island. And Jeoja Island, which stood between the Jungnang Stream and the Han River, disappeared for the development of Apgujeong-dong.

Now another island on the Han River is in danger of being destroyed. Bam Island is located between the districts of Yeongdeungpo and Mapo.

The island came into the public spotlight recently with the release of the film “Castaway on the Moon” last May. The movie revolves around a man who has lost his job and his girlfriend. He decides to jump off a bridge into the Han River and is washed up on to Bam Island’s shore. The island becomes his refuge, just as it is now for countless wildlife.

Since 1999, the island has been designated an ecological protection area and no humans are allowed to enter the island. Doing so would result in a fine for negligence that exceeds 2 million won ($1,600).

Bam Island was partially destroyed in 1968 for the development of Yeouido. A huge amount of its stone was used to build 7.5 kilometers (4.6 miles) of dikes enclosing Yeouido.

Bam Island was revived thanks to the accumulation of sand from the upper stream and dense forests. Nearly 5,000 migratory birds, such as wild duck, bufflehead and pintail, come to the island every winter. A country with a place so favored by migratory birds in the heart of its capital is by no means common.

However, Bam Island faces a crisis as the Seoul Metropolitan Government launches a canal construction project for the Han River to build an international terminal in Yongsan. The terminal would ensure that 5,000-ton vessels will sail to China via the Seoul-Incheon Canal. Dredging the river bottom is an integral part to enable the use of vessels 10 times larger than those that currently cruise along the Han River.

However, no careful consideration for winter migratory birds seems to exist in the recently released environment impact assessment for the Han River Canal. The assessment was carried out between April and June, when most of the birds were not on the island. For this reason, environmentalists show strong opposition to the assessment’s validity. They argue that the swift currents caused by large ships may do harm to the island’s sandy plains, a resting place for birds.