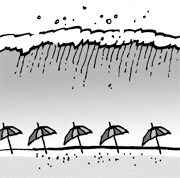 The film Haeundae, which opened on July 22, describes an imaginary situation in which Haeundae, Busan, is hit by a tsunami and comes to ruin.

In films like this, a Cassandra character, so-called after the Trojan prophet who brought bad news but was cursed never to be believed, always appears, and the character s predictions of doom are ignored. In Haeundae, Kim Hui, played by Park Joong-hoon, predicts, If there is an earthquake off the coast of Tsushima Island, Japan, a tidal wave will reach the seaside of Busan in just 10 minutes, and urges people to prepare, but civil servants say they are busy as it is the holiday season, and nobody listens to him.

It may seem absurd at first to hear of a tsunami hitting Korean soil, but there are precedents. On May 27, 1983, the JoongAng Ilbo reported: As an aftereffect of the earthquake in Japan the sea level of the East Sea in Gangwon Province grew higher and then lower and a wave of 3 meters in height swept the shore, leaving 3 people missing and sinking 74 ships.

The earthquake at the time occurred in the East Sea (Sea of Japan), south of Hokkaido, Japan. One hundred people died in Japan because of the earthquake. Even when the exact term is not used, any waves or fluctuations of sea level due to an earthquake on the seabed are technically tsunami.

On July 12, 1993, another earthquake occurred in the sea southwest of Hokkaido, which caused a wave on Korea s east coast, damaging 57 fishing boats.

On July 20, 1993, these words from Professor Oh Im-sang of Seoul National University were printed: If a wave starts in the sea near Japan it can reach Korea in two to three hours, so we must immediately go into preparatory positions in case there is a seabed earthquake.

It turns out Professor Kim s claims in the film are not that absurd, either.

But what may worry people vacationing in Haeundae today most is not a tsunami, but sand erosion. As a result of indiscriminate seaside development since the 1980s, the amount of sand on the beach has fallen each year, and one reads about tens of thousands of tons of sand having to be trucked in before the summer peak season.

A gorge effect is even taking place, with the water rapidly growing deeper as the shoreline decays because of erosion. Various countermeasures to protect the sand are being proposed, but there does not appear to be a clear-cut solution as of yet.

Haeundae is a vacation spot that boasts great history and tradition. The great scholar of the Silla Kingdom Choi Chi-won even took the character un, meaning cloud, from his pen name Go Un, or lonely cloud, to name the place. It may not be as dramatic as the movie, but if the beach disappeared and only the sea and sky were left, it would be a great disaster indeed.