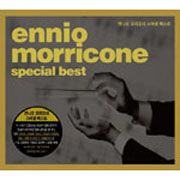 Ennio Morricone simply has too many hits to fit on one disc, which is why Sony decided to release this three-CD set.

It doesn’t contain all of the composer’s works - obviously, since the man has written scores for 400 films - but the set does a great job of highlighting his best work. The first disc features romantic and well-known pieces such as “Deborah’s Theme” from the movie “Once Upon a Time in America” and “Nuovo Cinema Paradiso” from “Cinema Paradiso.” The second one contains brighter tracks including my personal favorite “H2S” as well as the famous spaghetti western tune “Il Buono, il brutto, il cattivo” from the synonymously titled film “The Good, the Bad and the Ugly.”

The set has 57 film scores in all, including many that Morricone didn’t play at his concert in Seoul last May. But the fact that there’s only one live track - at the end of the final disc, none the less - is disappointing and will leave you shouting for an encore. By Lee Hae-joo