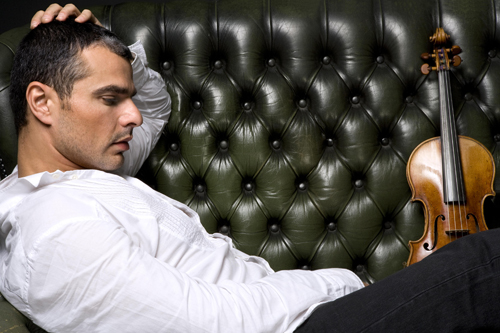 Laurent Korcia is someone Koreans these days would call eomchina.

This newly coined term, which loosely translates as “my mom’s friend’s son,” refers to a person with good looks, an amicable personality and extreme levels of talent.

Korcia certainly fits into this category.

The French violinist has been training since he was a child and has won numerous honors at prestigious competitions and praise from music critics.

Last year, he was also named by People magazine as one of the sexiest men alive.

Korcia’s instrument is as hot as himself: He’s been playing a 1719 Zahn Stradivarius since 1999, a violin loaned to him by the French conglomerate LVMH Group, which represents Moet, Hennessy and Louis Vuitton.

He was signed to a worldwide contract by EMI last year and his album “Cinema,” which features film music, was released in Korea last month.

The JoongAng Daily talked to this virtuoso about his music, life and more through e-mail.

Q. How did you become interested in film music?

A. A few years ago, I made an arrangement for “Les valseuses,” a 1974 road-movie by Bertrand Blier that became a cult hit, partly due to the fact that it was the first appearance for two legendary French actors: Gerard Depardieu and Patrick Dewaere.

As a child, I was very moved by Chaplin’s movies and music, which I found essential to have on my recordings. Even if Chaplin was not a composer, his music is very romantic, poetic and touches the heart, not to mention that Charlie Chaplin composed all of his scores on the violin.

Do you think that film music can be underrated?

As a musician, I am interested in all kinds of music. Music talks about emotions, especially film music. I can’t understand why people like to classify music and why film music should be less “honorable” than classical music.

It started with Saint-Saens at a time when music was one of the only media to express emotions, soon followed by Prokofiev, Shostakovich and Honegger. The golden era of Hollywood has seen marvelous composers such as Korngold, Waxman, Steiner and Herrmann. Strangely, and for a long time, I hope it will change now, these composers have been ignored by the classical music world.

Any further plans in film music?

I have composed the music of one French director and have plans for other film music.

Also, I just recorded the original score for “Ocean,” a great movie which will be on screens in the autumn.

I also have to say that it is not by chance that we find so much violin in music scores in general.

This instrument has a range of colors and emotions that really talk to the soul and to life, making it a vehicle for music and cinema.

What would you say is the biggest privilege of being a classical musician in today’s music scene? Any downside?

To be able to go on offering this beautiful music to the audience, which is the root of all music including a lot of pop music compositions nowadays. It is always amazing to discover the hidden links between musicians.

For sure, Miles Davis and John Coltrane have been inspired by Ravel, Stravinsky or Bartok, who themselves found a lot of their inspiration in folk music from all over the world. And this essential process is endless.

You began your musical career at an early age. How has your perspective on music changed over the course of your career?

It has been in constant evolution, according to my understanding and experience through the different steps of my life. It is an endless process, which is how you always get further and maintain some interest. Questioning yourself is a necessity of life.