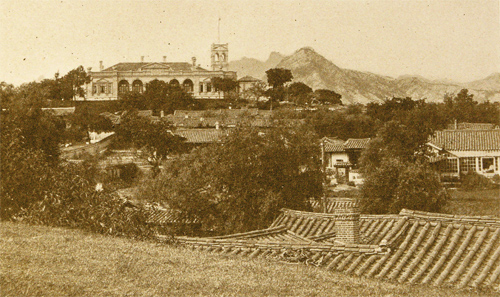 In this photo, the Russian Legation is shown in its original form. Historians say it was one of the most conspicuous buildings in the city. Provided by Myongji University-LG Yeonam Library

A top a small hill in the Jeong-dong area, near the Canadian Embassy and the Yewon School, construction on two buildings is under way.

The most visible work being done is on a large, upscale apartment building, a common sight in Seoul. Nearby, another structure smaller in size but perhaps larger in significance is under renovation: the original Russian Legation building, or part of it, to be exact.

The three-story white tower used to be part of the Russian Legation complex, as seen in the picture above. A legation is a diplomatic office lower than an embassy. The tower has been undergoing a process of restoration since 2007. The restoration, aimed at strengthening the tower walls, is set to be finished in December.

“You cannot be in here,” screamed a construction worker waking up from a nap in the shade of a nearby tree on a recent sizzling afternoon as this reporter approached the tower (without a construction helmet) to get a closer look beneath the protective blue screens.

Given the current state of the tower, it certainly was a challenge to imagine what the entire complex may have looked like in its early years. The original legation building no longer exists, but fortunately there is a photo of the entire complex to provide us with a valuable record of how it once stood. 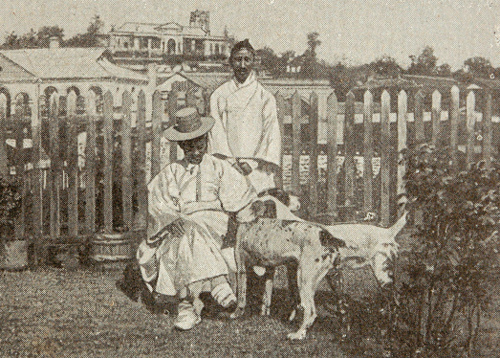 As one of a few buildings representative of Western architecture in Seoul at the time, the Russian Legation was a favorite site for photographs. Here two Koreans pose in traditional Korean costume. Provided by Myongji University-LG Yeonam Library

The photo was published in the 1906 book “The Passing of Korea.” The book was written by Homer Hulbert (1863-1949), an American missionary in Korea and editor of the English-language monthly Korea Review.

“From the angle of it, the picture looks to have been taken from the Sontag Hotel,” said Ahn Chang-mo, an architectural history professor at Kyonggi University. The Sontag Hotel was the first Western-style hotel in Korea and stood on the grounds of Ewha Girls’ High School in Jeong-dong until 1923.

Ahn says the houses in front of the Russian Legation probably belonged to foreign missionaries. Historical records show that a cluster of such missionary houses once stood on the site of Yewon School.

All of the foreign legations that opened in Korea in the late 1900s are noteworthy in their own right. However, many historians ascribe particular significance to the Russian Legation, because it was where the last king of the Joseon Dynasty lived and ruled for one year and nine days. King Gojong (1852-1919), also known as the first emperor of the short-lived Korean Empire, spent his time at the legation planning for a modern, independent Korean state.

The king left Gyeongbok Palace to take refuge at the Russian Legation after the murder of his wife, Queen Min (1851-1895), also known as Empress Myeongseong, on Oct. 8, 1895. 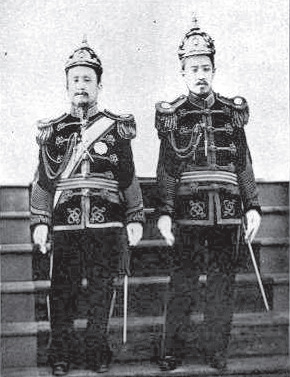 “Since the murder of the queen, I am surrounded by traitors. Every day I feel that my life is being threatened, and worry that there might be another coup d’etat. I request that with your military power, you could protect me,” Gojong wrote to Karl Ivanovich Weber, who served from 1885 to 1897 as Russia’s first consul general to Korea.

According to Russian foreign policy documents dated Jan. 10, 1896, just over three months after the queen’s death, Gojong made an official inquiry to the Russian legation asking for asylum.

Gojong and the crown prince left Gyeongbok Palace early in the morning of Feb. 11 and arrived at the Russian Legation in a covert operation that involved a high level of security. The day before, about 120 soldiers had been summoned from the port of Incheon to participate in the operation.

“The whole Far East was electrified by a sensational telegram - ‘The King of Korea has escaped from his Palace, and is at the Russian Legation,’” wrote Isabella Lucy Bird in “Korea and Her Neighbours” (1898). “On that morning the King and Crown Prince in the dim daybreak left the Kyeng-pok Palace in closed box chairs, such as are used by the Palace waiting-women, passed through the gates without being suspected by the sentries, and reached the Russian legation, the King pale and trembling as he entered the spacious suite of apartments which for more than a year afterwards offered him a secure asylum.” 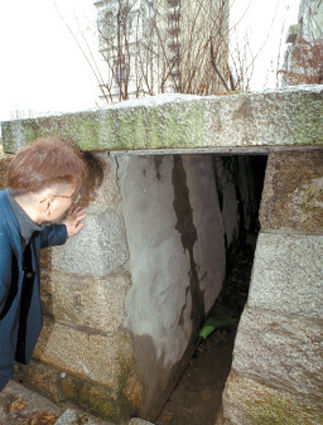 There is a secret underground passage from the original Russian legation building to Deoksu Palace. [JoongAng Ilbo]

It was at the Russian Legation that the Korean king had his first experience in a Western-style home, something that perhaps fueled his already great interest in Western architecture and lifestyles. To accommodate the king’s practice of Korean ancestor rituals, the Russians also set up an altar in the legation for his late wife, records show.

But why did the king choose Russia? The Korea-Russia relationship goes back to 1884 when the two signed a commerce treaty. A year later, Weber, the first consul general, was dispatched to Korea.

At first, the Russian mission was located in an existing mansion presumed to have been in the same area as the current legation complex. Set on high ground overlooking the city like a European castle from the Middle Ages, the legation complex was constructed in 1895 by Russian architect Afanasij Ivanovich Seredin Sabatin. According to historians, the site once housed a stable for horses used by the royal family during the early years of the Joseon Dynasty (1392-1910).

There were already a number of other countries with legations in Korea when Gojong took refuge at the Russian Legation in 1896, including the United States, England and France. But Gojong chose to seek refuge with Russia. 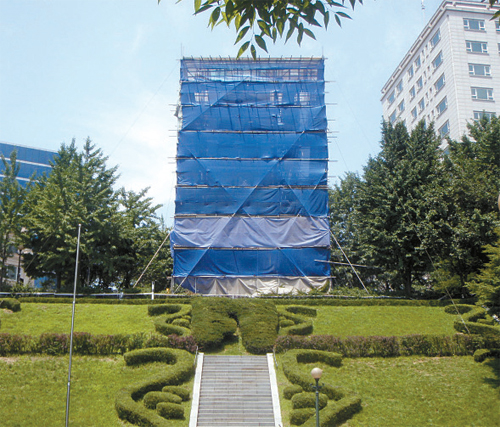 Renovation of the tower continues until December. By Kim Hyung-eun

Hong says Russian diplomats were keen on gaining Korea’s trust to support its political and economic interests in East Asia. The feeling was mutual. Korea thought of Russia as a perfect military ally because, unlike Japan, Russia had no intentions of invading Korea. Queen Min, who wielded great influence in state affairs before her death, was a keen advocate of Korea’s pro-Russia policy.

But the Korea-Russia friendship took an unexpected turn when Russia was defeated in the Russo-Japanese War (1904-1905) and Russian diplomats were forced out of Korea. Russia did not return to Korea until later, as a consul-level mission.

The castle-like legation was destroyed in the Korean War (1950-1953), and only the tower was left standing. It wasn’t until the 1970s that the Korean government designated the structure as a cultural property (Historic Site No. 253) and had it repaired.

“The old Russian legation building is a symbol of the Russia-Korea friendship,” said Dmitry Kulkin, a secretary at the Embassy of the Russian Federation in Seoul. “Whenever an important delegation visits from Russia, we take them to the structure so that they can hear about the history of the building and see it for themselves.”

Today, the Embassy of the Russian Federation in Seoul is just a five-minute walk from where the old Russian legation complex once stood. According to Kulkin, the Russian Embassy had hoped to build the new mission on the site of the original Russian legation tower, but was only able to purchase the property on which the current building sits.

The current Russian Embassy building was completed in 2002. Prior to that, the Embassy of the Russian Federation was located in southern Seoul.