Fashion and art cuddle up

Fashion and art cuddle up 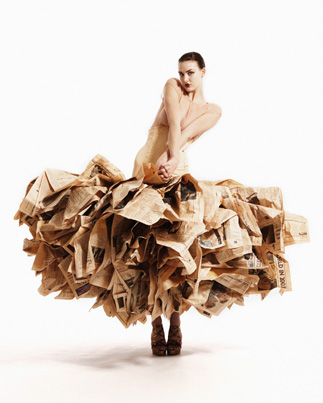 A dress made by Gary Harvey using 30 copies of the Financial Times.

The worlds of fashion and art have been getting cozy for some time now.

Collaborations between the two sides over the years have often created tangible benefits for the big names involved, providing an artistic justification for clothes, shoes and accessories while at the same time bringing art a step closer to everyday life.

Two exhibitions that illustrate this successful marriage of fashion and contemporary art recently kicked off in the outskirts of Seoul, offering up some fresh ideas for the concept.

For Seoulites, visiting the exhibit requires embarking on a short trip. But with the monsoon season winding down, perhaps a brief getaway isn’t such a bad idea. Besides, one of the exhibits is free and the other will only set you back 3,000 won ($2.43), offering an inexpensive diversion.

The Gyeonggi Museum of Modern Art is a relative newcomer in the modern art business, as it officially opened just three years ago. But last year it spearheaded a bold, ongoing project dubbed “Cross-genre Exhibition,” which seeks to explore the relationship between art and other fields. Last year, museum officials picked architecture. This year, they chose fashion.

The specific focus this time around is on “ethical” fashion, which looks to promote environmental and social awareness in the industry through the use of eco-friendly and fair trade products.

“Ethical fashion is a relatively new concept in Korea, but it was the buzzword in the fashion world last year,” said Hwang Rok-ju, a curator at the museum.

On display are about 90 pieces from six countries. Most were created by fashion designers, though installation artists, architects and photographers made some as well.

One of the artists ? Gary Harvey, a London-based eco designer ? somehow manages to create haute couture from green materials, using recycled materials such as newspapers. Although certainly works of art, his pieces aren’t wearable.

But the works of Orsola de Castro, a London-based designer and founder of the green label From Somewhere, are indeed suitable as clothing. Her pieces, made from leftover fabric, have even been sold in other countries. The designer is also the co-founder and curator of Estethica, the groundbreaking eco zone at London Fashion Week. 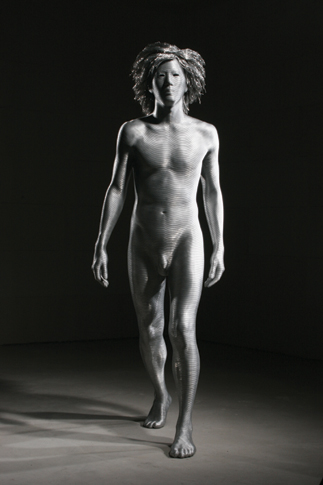 A piece by Park Seung-mo that is part of the “Fashion, Art and Ravishing Translation” exhibition, which explores the relationship between art and fashion. Provided by the organizer

Works by a group of three Korean designers ? Yun Jin-seon, Hong Seon-yeong and Chae Su-gyeong ? use clothes donated to charity. The pieces bring a second life to the old clothes by making them hip and trendy, the designers say.


Fashion Ethics: Wear Good opened last Thursday and runs until Oct. 4 at the Gyeonggi Museum of Modern Art, located in Ansan, Gyeonggi. The museum is near Suwon Railroad Station. Admission is free. For more information, call (031) 481-7032 or visit www.gma.or.kr.

Organizers of this exhibition call it “the chat between fashion and art.”

Their goal is to delve into how fashion and art interact, affect each other and create trends. The exhibition has brought together a who’s who in the Korean fashion world, including hanbok, or traditional Korean dress, designer Lee Young Hee; Jung Kuho, the designer of Korean brand KUHO; and Lee Sang-bong, among others.

Their works are juxtaposed against some renowned Korean artists such as Jeong Myeong-jo, known for his drawings of Korean women dressed in traditional clothes; Park Seon-gi, who uses natural materials; and Son Mong-ju, an installation artist.

In Section One, dubbed “Gazing in the Same Direction,” works of art are paired up with clothes bearing similar themes. The work of designer Lee Young Hee, for example, is paired with pieces from artist Jeong Myeong-jo. The two use traditional themes.

In Section Two, called “Face to Face, Converse,” the works on display were created by artists and fashion designers together. 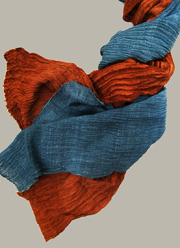 A scarf made by the designer Gru, left, are on display at the “Fashion Ethics: Wear Good” exhibit at the Gyeonggi Museum of Modern Art. Provided by the organizer

Drawing the most attention, organizers say, is a piece featuring Levi’s clothes designed by one of the most talked-about contemporary artists, Damien Hirst. Flown in from the Levi’s headquarters in San Francisco, the United States, it’s a rare chance to get a firsthand look at this buzz-making display.

Fashion, Art, and Ravishing Translation started on July 18 and runs until Sept. 27 at the Aram Art Gallery in the Goyang Aram Nuri Arts Center. The venue is near Jeongbalsan Station on line No. 3. Tickets are priced at 3,000 won. For details, call (031) 960-0180 or visit www.artgy.or.kr.