Ice show glides back into town

Ice show glides back into town 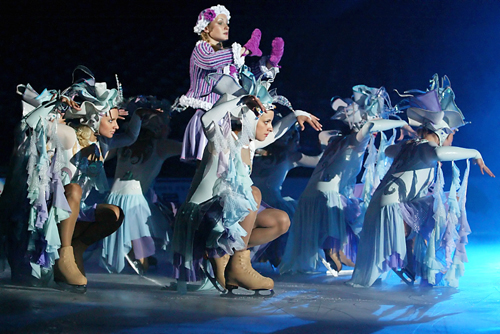 The cast of “Bolshoi on Ice” performs a scene from “The Snow Queen.” Provided by IMG Art Company


It wouldn’t be summer without the ice skating shows.

“Bolshoi on Ice” is back in Korea with a slew of skating stars for its ninth performance run and a world premiere. The show, which first came to Korea in the summer of 1993, is presented by the Bobrin Ice Theatre, which is headed by celebrated Russian figure skater Igor Bobrin.

“Bobrin is the master behind all of the choreography,” says Jeanne Kim, of Munhwa Icon, the show’s promoter.

The cast of 40 also includes one notable newcomer. Former world, European and Olympic champion Irina Slutskaya, who retired from competitive figure skating three years ago, will show off her considerable skills.

As in past years, the show features scenes from four dance and theater works. Bobrin himself appears as the villain von Rothbart in excerpts from Tchaikovsky’s “Swan Lake.” Also on the program is Hans Christian Andersen’s “The Snow Queen,” which was produced in honor of the author’s 200th anniversary (he was born in 1805). And scenes from P.L. Travers’ “Mary Poppins” give the show a touch of lighthearted whimsy.

New this year is the world premiere of Bizet’s opera “Carmen” on ice.

Skating fans worried that they won’t get to see enough of their favorite skating stars needn’t be concerned. There will also be a showcase featuring solo turns by some of the biggest names in the cast. Bang I-suk of IMG Art Company, one of the promoters, says the show is “quite popular” in Korea since it’s been presented here so many times in the past 17 years.