The innovative artwork of Scandinavian nations

The innovative artwork of Scandinavian nations 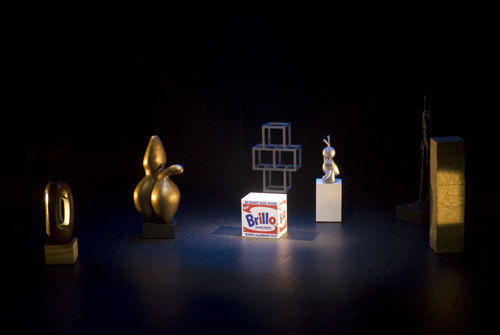 "Drama Queens" by Michael Elmgreen and Ingar Dragset. Provided by the Kukje Gallery

To the masses, Nordic countries are known for their long winters, white nights and, of course, those pillaging Vikings of old.

To the art world, they’re known for their innovative ideas.

Some of the best contemporary Nordic art is now on display at the Kukje Gallery in downtown Seoul, providing a glimpse into a style that is somewhat foreign to most Koreans.

The exhibit features works from six contemporary Scandinavian artists: Kaspar Bonnen and Michael Elmgreen of Denmark, Ingar Dragset and Ann Lislegaard of Norway, Per Wizen of Sweden, and Marko Vuokola of Finland.

Bonnen ? a prominent young painter ? is known for “combining aspects of modernist formalism with narrative and almost theatrical modes,” said curator Pontus Kyander, the public arts manager in Auckland, New Zealand, who organized the event. A Bonnen work on display titled “You’re the Speaker” gives viewers the sense that they are being interviewed by the people in the painting. The artist’s style creates a kind of chaos that leaves some viewers a bit disturbed, yet it also challenges their perceptions.

Elmgreen and Dragset are actually a married couple. They humorously deconstruct artistic spaces and present absurd and poetical themes.

The two have collaborated on projects for the Tate Modern museum in London and numerous international art events. Elmgreen and Dragset are currently curators and participating artists in the Nordic and Danish pavilion at the 2009 Venice Biennale.

The Kukje exhibit includes a video recording of their art performance “Drama Queens,” which features imitations of sculptures by Alberto Giacometti and Henry Moore. The sculptures ? powered by electric motors ? move around the stage as if they are in an actual play, debating which one is the best work.

Wizen has received increasing attention recently from institutions and collectors. The Swede’s works are essentially recreations of old paintings, which he makes by assembling book reproductions of the pieces into collages. These projects are so complicated that they sometimes take years to finish. His works have little relation to the historical context of the paintings. Instead, he presents troubling imagery based on the styles of artists like Uccello, Masaccio and Caravaggio.

Marko Vuokola has experimented with variations in time and space in his “Seventh Wave” series. The most recent addition involves the landscape around Marfa, Texas, where he took pictures of objects at different time intervals. Lastly, Lislegaard has caught international attention through her sophisticated sound and video installations.