A hotbed for drug testing

A hotbed for drug testing 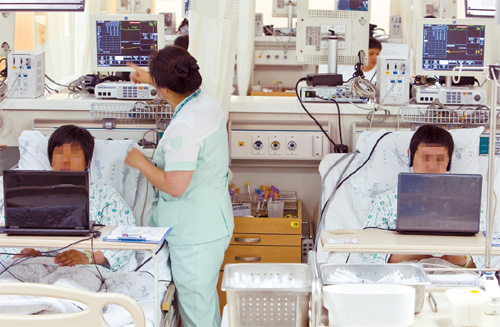 A group of students participating in the first phase of a clinical trial kill time on their laptops. They will spend a week in confinement at Seoul National University’s Clinical Trial Center during the test. By Shin Dong-yeon

On the second floor of the Clinical Trial Center at Seoul National University Hospital, there is a row of 20 neatly arranged beds. A young man identifying himself only by his last name, Hwang, 28, is watching an English Premier League soccer game on an LCD TV attached to the ceiling. Nearby, there are computers displaying complex graphs and curves that monitor his condition.

A doctor walks in and asks Hwang to take two white pills. The company that made the drug is hoping to gain approval to market it to the public. The drug has just passed through the pre-clinical phase of animal testing and is now being tested on human subjects in the first phase of a clinical trial.

Hwang, who is studying for his CPA, had checked in to the hospital a day earlier to participate in the trial. In the coming week he will be asked to give 30 blood samples. His nurses will regularly monitor his progress and check for signs of any adverse effects the drug may be having on his body.

Clinical trials are generally divided into three stages. In the first stage, the potential drug is tested on healthy people to determine how the drug and the body interact and whether the drug is harmful, such as checking if it changes into a poisonous substance once it enters the body. The second stage is aimed at ascertaining the appropriate dosage for use and detecting potential short-term side effects. The third stage involves large groups of patients and helps companies determine the exact dosage and effectiveness of the new drug.

The pills Hwang is taking are for diabetes.

“This is a new drug being tested on humans but as far as I know the drug is not supposed to be harmful to the body,” said Hwang.

But he hasn’t been entirely honest about this particular venture with his parents. “I told my parents that I am going to the provinces to make some money by doing physical labor,” said Hwang, who says he is participating in the trial for the money. He will be paid 700,000 won ($561) for his participation in the trial. 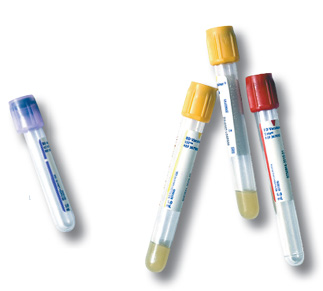 Before he checked in, he signed a consent form that outlined the purpose of the trial, including the potential risks involved, and the hospital’s legal responsibility to provide treatment and compensation for any mishaps that may occur.

Scenes like the one at the Seoul National University Hospital are not uncommon. Efforts to lure foreign investment, coupled with a desire by international pharmaceutical companies to take advantage of the relatively high level of affordable medical services available here, are increasingly making Korea a magnet for clinical trials.

Last year, the Korea Food and Drug Administration approved a total of 216 clinical trial requests by international pharmaceutical companies. Leading the pack were Pfizer and GlaxoSmithKline, both initiating 26 clinical trials. Experts say that if cases in which pharmaceutical firms chose not to request permission directly from the KFDA but through a third party are included, an estimated 400 billion won was spent by international companies on clinical trials last year.

Pfizer, one of the leading pharmaceutical companies in the world, signed an agreement with the Health Ministry in 2007 on a research and development project that will see the company pour a staggering $300 million into the country by 2012 for the development of new drugs and technology. In May 2008, Pfizer designated the consortium formed by the Samsung Medical Center, Seoul National University Hospital, Severance Hospital and Asan Medical Center as Clinical Research Site partners.

“Recently, we had visiting officials from Pfizer telling us that in the past year, South Korea’s CRS research achievements were the best,” said Go Jae-uk, an official with the clinical trial unit of the Samsung Medical Center. “They told us that the error rates for our research data are the lowest among the designated CRS,” Go said, adding that quick government approval and the relative ease of finding willing participants for clinical trials were other factors that contributed to the country’s increasing popularity as a clinical trial center.

Sin Sang-gu, who heads the Korea National Enterprise for Clinical Trials, argues that the country now needs to go a step further by actively initiating research projects instead of just being a testing ground, pointing out that the size of the country’s pharmaceutical market stands at 9 trillion won.

Nevertheless, sometimes patients looking to make a quick buck take risks that are hard to monitor. Experts say that anyone who has just completed a clinical trial should take at least two to three months off before engaging in a new one. That’s because it’s hard to gauge a trial medication’s effects on the body until after some time has passed. But since hospitals are not allowed to share patient information, it is often hard to determine whether a prospective patient is fit for participation in a clinical trial, even after he or she undergoes a pre-trial exam.

An official with the SNU Hospital, speaking on condition of anonymity, said that these days college students are starting to participate in clinical trials, especially during the summer.

In order to minimize the risks of clinical trials, the government has made the Korea Food and Drug Administration the main body involved in accepting requests for clinical trials and giving its approval. Only hospitals and organizations that have been designated as Clinical Trial Centers can conduct clinical trials. These centers then have to form internal review boards of more than five people, with at least two from the outside, such as lawyers.

But despite these measures, the system is not foolproof. According to a report made by the KFDA to the National Assembly in 2007, a total of 37 people died in the previous three years while participating in clinical trials.

Civic groups argue that the government needs to do a better job of alerting prospective trial participants to the potential risks involved.

“Many college students think of clinical trials as some sort of high-paying summer job,” said Seong Nam-hui, an official with the civic group Health Network. 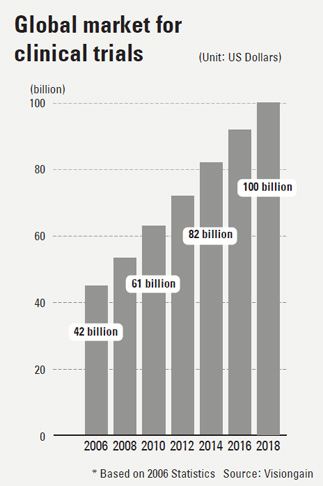 Government officials are aware of the problem but argue that all the regulations in the world won’t help if the public doesn’t have an understanding of the risks as well.

“We are trying to come up with a method that helps people fully understand the risks involved in participating in a clinical trial while at the same time creating an active market for clinical trials,” said Kim Jeong-mi, an official with the KFDA.

Kim Dong-uk, a doctor at Seoul St. Mary’s Hospital, stresses that those conducting the trials must adhere to a strict set of ethical guidelines by taking the patients’ condition into account. 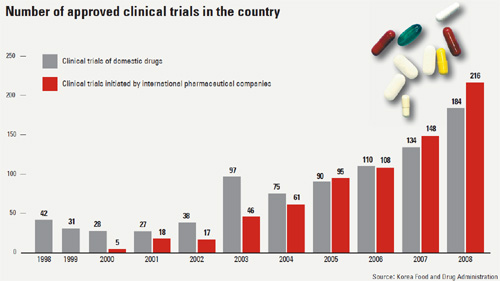 But with so much money involved, it may not always work that way.