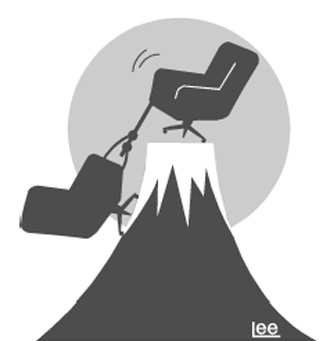 Yohei Kono, who until a few days ago served as the speaker of the House of Representatives, was an exception to this impressive power streak. Kono led the party to a marginal victory in 1993 general elections but had to relinquish ruling power to a coalition formed after the Liberal Democrats failed to attain a majority seat.

It took only 10 months, however, for the Liberal Democrats to snatch back its ruling position from the feeble coalition government. That brief period was the only time the LDP became the opposition party since its formation in 1955. The party has retained power for one of the longest periods in the democratic world.

The party was born from a political union of the Liberal Party and the Democratic Party. Its birth was spurred by fear and disapprobation among conservatives when the idea of socialism permeated post-war society. Positioning themselves against the liberals and reformists in the country was a dogma that sustained the party for more than half a century.

Until the coalition flip-flop after the 1993 elections, the Japan Socialist Party kept a minority balance in the Japanese political system, accounting for the remainder of the lower house seats, of which two-thirds were occupied by Liberal Democrats.

The Japanese have long been accustomed to having the LDP as the dominant party. The party pulled the country out from the post-war depression and turned it into the world’s second-largest economy. It incubated political security and an effective bureaucracy that spurred economic prosperity.

But the LDP’s history in Japan is not perfect. The party can be blamed for political factionalism, unsavory political-business relations and a rigid bureaucracy that has made the economy intransigent to reforms and change.

The ruling party again faces the danger of losing the government. Opinion polls all point to a sweeping victory for the opposition Democratic Party in next month’s general elections.

Bureaucrats have begun changing their political positions to appear favorable to their new bosses-to-be. There are already talks of all senior officials being sacked. One Democratic Party member related that he found a pile of name cards from government officials on his desk after he returned from a short break.

Bureaucrats’ constant race to switch to the winning side will be familiar to people in our own country. Those “soulless” workers caught in the pitiful race for power may be universal.

But the recent move by the Japanese bureaucratic mob suggests a power change may be inevitable. When rats start to jump ship, it is a sign that a tragedy is in the making on board.